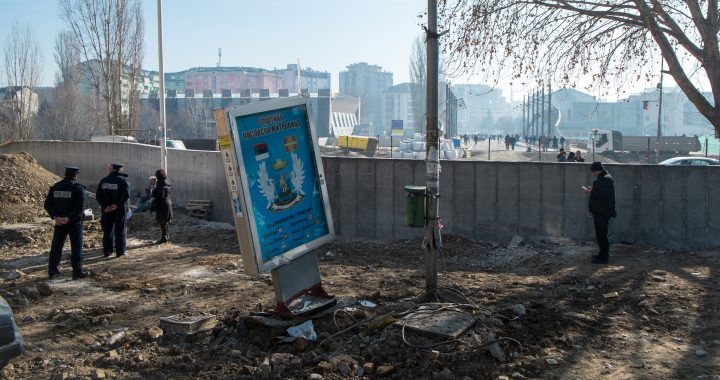 Over the weekend an agreement was reached to begin removing the Mitrovica wall on Sunday, while the new design will be announced in the coming days.

The removal of the “existing structure” in Mitrovica will begin on February 5 and end as soon as possible, according to an agreement signed on Saturday by Kosovo’s minister of environmental and spatial planning and the mayor of North Mitrovica.

In December, during the construction to reopen the Mitrovica bridge for vehicular traffic and pedestrianize Kralja Petra street, a wall was constructed on the northern banks of the Ibar river. North Mitrovica mayor Goran Rakic initially said that the wall was to be redesigned into an amphitheater. A few days later, the European Union Office in Kosovo said that it would be an elevated stairway.

The Mitrovica wall has remained a hotly contested issue, with the Kosovo government promising its speedy demolishment.

Now, parties have signed an agreement to demolish the wall over the coming days. After a late meeting that went into the early hours of Saturday morning, Mayor Rakic, Kosovo government officials, and the Head of the EU Office Kosovo issued a statement that a solution to the wall issue was reached.

“The parties… agreed to resolve the issue surrounding the construction of the wall in Mitrovica. Together they reached a solution that will ease tensions in the north of Kosovo, assist the freedom of movement and create an ambiance that will benefit all citizens in Mitrovica,” the statement said.

“During the coming days the parties will announce to the public the revised plan for the pedestrian zone.”

The agreement signed on February 4, obtained by Indeks Online, states that the “Directorate of urbanism in Mitrovica North municipality will issue the construction permit” to begin implementation of the new design by February 7.

The agreement does not provide further details on the new design, except that it will be in accordance with the Brussels-negotiated agreement on the revitalization of the Mitrovica Steel Bridge.

However, Petrit Selimi, CEO of MC Development Office Kosovo and former acting Minister of Foreign Affairs, tweeted that pillars in the new design will also serve as barriers.

Where the wall was built 2 illegally segregate ethnic communities, agreement has been reached in north #Kosovo to do pillars for pedestrians pic.twitter.com/3Es3spnKoL

Kosovo President Hashim Thaci also took to Twitter, congratulating the agreement and saying that more focus should be placed on “solutions that integrate communities,” such as implementing the Association of Serb Majority Municipalities.

I congratulate central & local levels of gov in Republic of #Kosovo reaching agreement on integrating, not dividing communities by walls 1/2

We must ignore nationalist rhetorics from abroad and focus on solutions that integrate communities & respect Constitution, incl Association.