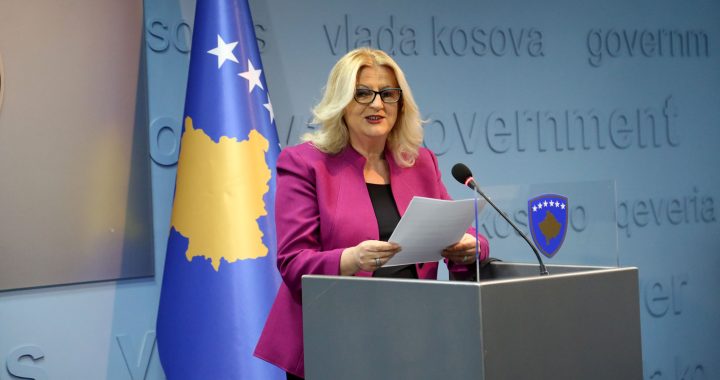 Minister Tahiri in a press conference. | Photo courtesy of the PM's office.

Tahiri: “Mitrovica wall will be eliminated within a few days”

“An illegal wall was built 10 days ago in Mitrovica, and will be eliminated within a few days,” said Kosovo Minister for Dialogue Edita Tahiri at a roundtable organized by Kosova Democratic Institute, KDI, on Friday.

“I might sound a bit too confident, but I am basing this on facts. The barriers from the past were removed, and this one will be too, with the greatest care.”

Earlier this month, a barrier was constructed on the north bank of the Ibar river during the revitalization process of the Mitrovica Steel Bridge. A Brussels-negotiated agreement to open the bridge for vehicle traffic and turn the Krajla Petra into a pedestrian street was reached in August 2015. Yet in December, a wall-like structure was built, causing concern that the agreement would not be respected.

After the barrier was constructed, Minister Tahiri claimed it was illegal. North Mitrovica mayor Goran Rakic claimed the wall would actually be redesigned into an amphitheater. Days later, Rakic and the European Union office in Kosovo claimed that it would not be a wall, but an elevated stairway.

On Friday, Tahiri said that the wall was a product of the last remaining “illegal parallel structures” in the north, and that it was never a part of the Brussels-negotiated agreement.

“Is it possible that while we go to dialogue to create freedom of movement, we could speak of walls? I must tell you, never was there such a discussion or agreement. Serbia tried to destabilize Kosovo with this wall, because they know that Kosovo Albanians cannot endure walls,” Tahiri said.

Although Tahiri claimed the wall will soon be removed, Kosovo MPs complained about the lack of transparency around the process.

“We found out only from the media two or three days after the wall was constructed… It was regretful that we were informed about this from the media. There was no information or transparency from the dialogue,” said Blerta Deliu, MP from the parliamentary group Kosovo Democratic Party, PDK.

Sadri Ferati, an MP for Kosovo Democratic League, LDK, from Mitrovica, complained that the EU-negotiated dialogue has not addressed Serbian political influence in the north.

“In these parts [northern Mitrovica], a PM is prohibited from circulating, while [Serbian Chief Negotiator Marko] Djuric is smuggled in illegally. This is the reality, and the wall is a reflection of the situation there. We should not be surprised,” said Ferati. “Belgrade is proclaiming that it spent billions there–not for development, but on salaries to pay for [Serb] loyalty. This has been in front of the eyes of international community.”
Later today Kosovo parliament will hold a session to discuss developments in northern Kosovo, with a particular focus on the barrier.