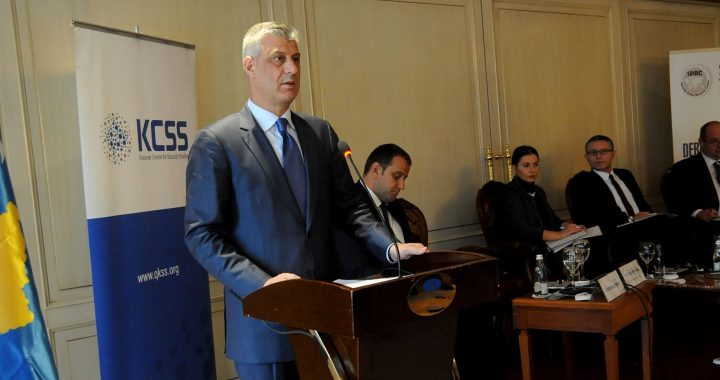 Photo courtesy of the President's Office.

Despite Kosovo Serb reservations, President Thaci says no one can veto the army

Discussing the transformation of the Kosovo Security Forces into an army with civil society activists, Kosovo President remained resolute on the initiative.

“Regardless of how the process of transforming the Kosovo Security Forces to the Kosovo Armed Forces happens, whether through legal or constitutional changes, it is a legal and constitutional process that cannot be stopped by anyone,” said Kosovo President Hashim Thaci on Wednesday. “Let me be clear: no one can veto this process.”

“[But], we want the KAF to happen through amendments to the constitution, by bringing together the will of all ethnic groups in the Kosovo Assembly. This is the best possible way.”

The President was joined by Kosovo civil society representatives to discuss Kosovo Serb perceptions of the Kosovo Security Forces, KSF, and its transformation into the Kosovo Armed Forces, KAF. Kosovo Serbs’ perceptions are crucial since a constitutional change necessary to establish a regular Kosovar army requires a double majority vote in parliament, as stipulated by the Ahtisaari Plan.

Saying that “the process is gradually moving towards the final stage,” President Thaci claimed that the opinions of NATO members on how the army should be formed are divided.

But, he stressed, everything is moving in close cooperation with the United States, NATO, and KFOR.

Despite Thaci’s optimism, nearly 89 per cent of Kosovo Serbs think that the army should not be established, and 74 per cent think that if it is established, Serbs should not participate, according to data from Human Center presented by security expert Veroljub Petronic.

Earlier this year, President Thaci announced his plans to establish the army by amending the current Law on the KSF in order to bypass a Serb veto. But by April, after NATO, the United States, and other members of the North Atlantic Treaty strongly condemned his ‘unilateral’ moves to broaden the responsibilities of the existing KSF, President Thaci backtracked on his calls to amend the Law on the KSF.

Yet the Kosovo government has continuously stressed that establishing the KAF is a main priority.

There are 103 active members in KSF from the Serb community. The number totals to about four per cent of the security force troop, almost 10 per cent of which are from minority communities, according to data from the Ministry for the KSF.

Jovana Radosavljevic, Executive Director of North Mitrovica NGO New Social Initiative, said that these Serb KSF members joined the forces primarily due to financial need. This was mentioned in her key findings she presented from her forthcoming research on Serb perceptions of the KSF. She argued that the Kosovo government has to do more to attract Serb members, and to reach out to the Serb community in general regarding KSF’s transformation into an army.

According to Radosavljevic’s research, Kosovo Serbs perceive the transformation of the KSF into the KAF as unnecessary since “KFOR maintains a sufficient security guarantee in Kosovo.”

Her research also found that fear, mistrust, and “emotional and symbolic issues” are the driving reason for Kosovo Serbs’ negative perceptions on the establishment of the army. President Thaci retorted that it is a political stance rather than one based on fear.

The President also rejected Radosavljevic’s recommendation that the process should be tied to the wider agenda of the Kosovo Serbia dialogue, offering instead to discuss the issue as part of an “internal dialogue” with Kosovo Serbs.

Tuesday’s conference was organized by the Kosovo Center for Security Studies.