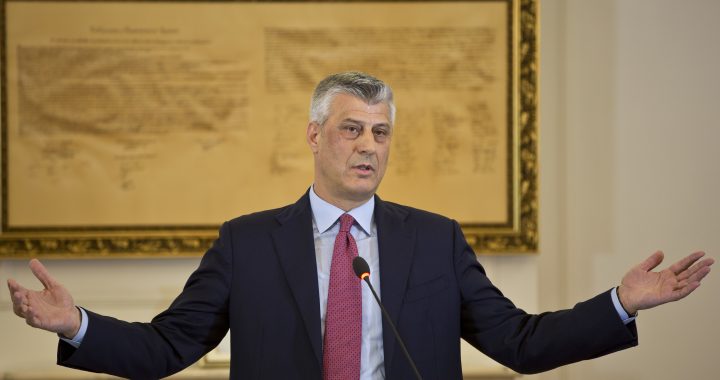 Kosovo President Hashim Thaci backed away from his calls to establish a regular army for Kosovo by amending the current Law on the Kosovo Security Force.

In a debate organized by Kosovo NGO FOL Movement on Tuesday, President Thaci said that he will try to gain support from the Kosovo Serb community for constitutional changes needed to establish Kosovo’s army.

“As a president, it has been awhile since I have reinitiated the efforts of ensuring support from every community. But, my efforts alone are insufficient, thus I call on everyone to contribute. This reinitiation of our efforts will be productive, sincere and transparent for every community,” he said during the debate.

The constitutional amendments required to transform the Kosovo Security Force, KSF, into a regular army require a double majority vote in parliament, as stipulated by the Ahtisaari Plan.

Last month, President Thaci announced that he was planning to establish the army by amending the current Law on the KSF in order to bypass a Serb veto.

Thaci’s shift in position comes after NATO, the United States, and other members of the North Atlantic Treaty strongly condemned his ‘unilateral’ moves to broaden the responsibilities of the existing KSF.

On Tuesday, Thaci said that the KSF is a multi-ethnic force, and that “the Armed Forces of Kosovo will also be multi ethnic.”

“Nobody can veto Kosovo’s army, it is an unstoppable process,” he said.

Thaci said that Kosovo has waited three years for the establishment of the army, but has been stalled due to electoral interests.

“In 2014, when I was prime minister, we were ready and we had the full support of the US and NATO for establishing the army. We had the support of the Kosovo Serbs and every other community for [establishing] Kosovo’s Armed Forces, but this process was postponed due to electoral interests,” he said.