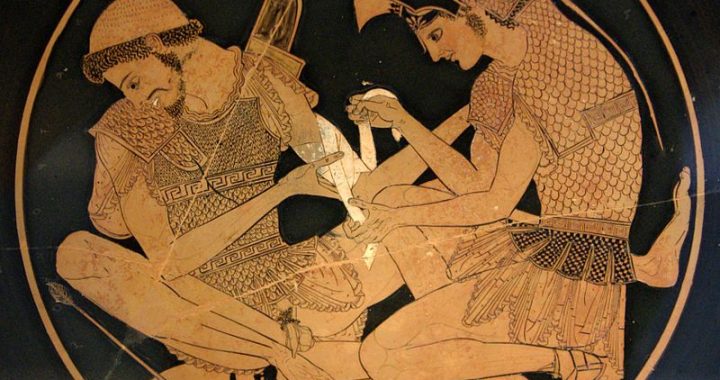 It’s important to remember that while culture and people shape our social identities, the fundamental truth is that no one is born homophobic, just like no one is born liberal, fascist, vegetarian, or a good swimmer.

This past June I attended a same-sex wedding in California, where a friend of mine I had met in graduate school in 2008 married her partner on a small farm setting north of San Francisco. During the early-evening ceremony guests sat outside in white chairs arranged in a circle beneath a huge sycamore, accompanied by some Rumi verses (the 13th century Persian poet) and stories of how my friend met and fell in love with the person with whom she was now exchanging wedding vows. It was emotional and we all teared up.

I thought about the wedding recently as I read about the first pride parade in Kosovo and the struggles of the LGBT community there. I also thought about my Kosovar friend—a prominent member of Kosovo’s intelligentsia in the 1990s—and our heated exchanges over LGBT issues during our late night, wine-fueled conversations in Washington, DC in the fall of 2004. Back then I argued with my friend that we needed to become more open to talking about the subject, but he disagreed, calling me a naive heretic of sorts turning his back to history and tradition. Still, our friendship survived and some years later over a dinner in Prishtina, my friend pointed toward me and said to his significant other: ‘he is the one who opened my eyes about gays.’ It was gratifying to hear that from him, yet I never forgot those testy exchanges and particularly his erroneous insistence that traditionally Albanians and their ancestors had always been heterosexual.

My Kosovar friend and I grew up in a conservative region and belong to a homophobic generation whose members—if some of them enlightened somewhat now—will surely recall times when they had approved of and participated in conversations choking with moral revulsion against homosexuality. But the point here is not to put our past to trial or lament over the irreversible fate of group identity, but to be open as individuals to social progress, particularly with issues that may affect the lives of those we love: our friends and families. Naturally, we all are product of our own social milieu and times, and if we grew up homophobic it is because the region and culture we were bathed in was conservative and isolated.

But to be a crusader and advance some cavalier theory of ‘heterosexual tradition’—as some individuals have done in the wake of Kosovo’s pride parade—and use that principle to deny equality to individuals attracted to their own sex is to perpetuate an ugly campaign of ingrained prejudice and ignorance. For it was in these ancient lands, including those where the Illyrians lived, that same-sex relations were once a norm and not an exception. Separating people based on sexual identity was an alien concept to ancients from Illyrian tribes to Greece, Rome, and Persia.

In fact, the label “homosexual”, in its current meaning, did not exist until mid-19th century and there is no such word either in Greek or Latin. The closest word in ancient Greece was paiderastia (“boy love’’), which describes relationships between an adult male and a young boy before adulthood. The ancients took same-sex and bisexual acts for granted and sexual intimacy between men was not only perfectly acceptable but was cultivated as a virtue and celebrated in art, in politics, and in war. You can find it in Homer’s Iliad, the aching love of Achilles for Patroclus, in lyrical verse of Pindar, Xenophon, or Plato’s dialogues where luminaries of fifth-century Athens extol virtues of same-sex love between men.

In times of war, male intimacy was encouraged and promoted as a strategy to strengthen the bond between warriors. The most famous example of this was the Sacred Band of Thebes, an elite group of soldiers made up of 150 same-sex couples who led the Theban army in major battles and defeated Sparta, the mightiest of Greek States. Eventually, the Sacred Band was defeated, its members killed to the last one, by the army of Philip II of Macedon in the famous battle of Chaeronea in 338 BCE, about thirty years after their inception. Plutarch, a Greek historian, tells us that after the battle, as Philip inspected the bodies of the slain lovers, he broke down weeping and said, “May utter destruction fall upon those who suppose these men did or suffered anything disgraceful.”

Another intriguing story recounts the great suffering of Alexander the Great after his intimate friend and lover, Hephaestion, succumbed to a fever and died. The famous general went nearly mad with grief, killed the doctor who had attended to his lover, refused to eat for days, cut his own hair, the mane and tails of his horses, and ordered, what has been called, the largest and most lavish funeral in history for his dead lover. It was the type of intense relationship between the two men that prompted Aristotle to comment that they were like “one soul abiding two bodies.”

But what about sexual attitudes among the Illyrian people? Unfortunately there isn’t much written material to give us a full picture, but that little that does suggests they weren’t any different from the Greeks. A few fragments that have survived lead us to imagine that, like Greeks, the Illyrians seem to have had a similarly relaxed attitude toward sexual relations; and at the very least they were not encumbered by restrictions such as monogamy. For example, a Greek author named Pseudo-Scylax traveled into Illyrian territory sometime in mid-4th century BCE and describes an Illyrian tribe where women rule and are free to choose who they have sexual relations with, including slaves and total strangers. Another similar story comes a few centuries later from Varro, a Roman historian, who traveled extensively in Illyria and wrote a book titled On Agriculture. In it he wrote: “[In Illyria] I have seen…a remarkable practice: their custom does not refuse to allow women…to mate with any man they please, to wander around by themselves, and to bear children.” The full quote in context can be read here on p. 239.

This portrait of social structure is not much different from that of Sparta under Lycurgus, the semi-legendary ruler, when permissive sexual practices were widespread. Given that warfare was a way of life for ancients, Illyrian territories frequently exchanged hands with regional powers and Greek States, passing on social practices, norms and values between generations of people. Many of the Illyrian archeological artifacts and symbols found show a pattern of a cultural closeness with Greeks. Attitudes toward sex were probably more similar than different. After all, the Dorian warriors, whose territory stretched and overlapped with Illyrian lands, were famous for raising armies consisting exclusively of male lovers and were thought by many ancient commentators to have been chiefly responsible for spreading the practice of intimacy between men in battle as a war strategy.

Closer to our times, intriguing observations about the practice of homosexuality and love between men emerge in literature, travel writing, and history about Albania. In literature, the early poet Nezim Frakulla (1680-1760) composed diverse poetry, including ghazals and homoerotic verses about male lovers. Others, like Havelock Ellis, an English physician, published Studies in the Psychology of Sex, a book on homosexuality, where  he  also commented about the practice of homosexuality in 19th century Albania. His sources included, among others, the famous mid-century Austrian scholar of Albanian Studies, Johann Georg von Hahn,  who, in his Albanesische Studien, wrote about intense and passionate love among young men in Albania. The reference  passage in English can be read here on page 10-11 and here in Hahn’s original German language on page 166. It’s possible that during his observations Hahn confused a type of fraternal love with sexual attraction, but then again it’s also possible that he actually met same-sex lovers. Others writers such as John Cam Hobhouse are also said to have observed similar cases.

These scattered fragments are not enough to draw any major conclusions on this subject, but they hint at a diverse  and intriguing history of sexuality. For an Albanian man with homophobic tendencies, especially an educated one, it’s worth reflecting on this notion that his venerated male ancestors lived in different times, including those where sex between them was an accepted norm. But the fundamental truth to remember is that no one is born homophobic, just like no one is born liberal, fascist, vegetarian, or a good swimmer. It is the willingness to be exposed to transformative learning and unlearning that we come to carve out new individual identities. Questioning cultural authority, whether that rests with our own family or entire society, does not corrupt our individual character, it merely refines our thinking and nurtures us into better and more enlightened parents, siblings, friends, lovers, neighbors, and citizens.