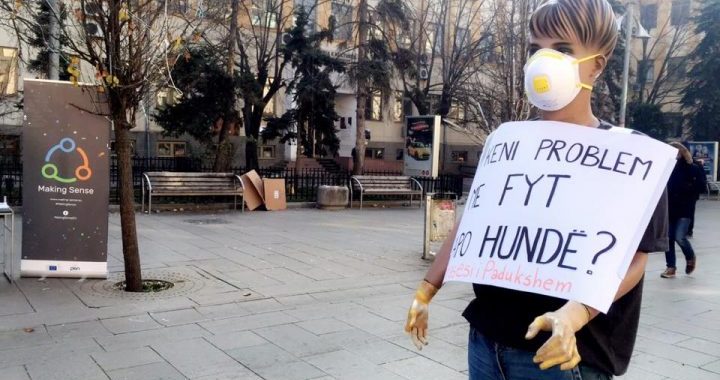 Kosovo announces a ‘task force’ to plan short-term and mid-term measures to combat air pollution in the capital, while citizens plan a protest to voice their concerns.

Hundreds of Prishtina residents are expected to gather this Wednesday at noon in front of the National Theater to protest high levels of air pollution that have consumed Prishtina in the last few months.

Data gathered by the US embassy air quality monitor over the past five days show that Prishtina air has had a consistently high concentration of PM2.5, tiny airborne particles commonly caused by burning coal and motor vehicles, which can cause serious health problems with long-term exposure. The air quality has been categorized mostly as “Unhealthy,” “Very Unhealthy,” and in some instances even “Hazardous,” reaching a high point of 431 PM2.5 concentration last Friday (a concentration of 0-50 PM2.5 is considered “Good”).

Through a Facebook post, the Minister of Environment and Spatial Planning Albena Reshitaj said that she shares the same concerns as Prishtina residents and that the pollution problem cannot be solved with a “magic stick.”

“In our capital city, there have been alarmingly high levels of air pollution for years, but that has never been made a government priority, and there has never been communication between representatives of institutions for air pollution since the end of the war,” she said.

Calling on citizens to reduce the use of motor vehicles and coal-fired heating, Reshitaj said that a new law on air pollution is in the process of approval.

“We inherited a law on protection from air pollution that had many gaps and was impossible to implement, but now we are in the phase of approving a new law that will regulate the sectors that are to do with air pollution, including the fuel that causes air pollution,” she said.

As a response, Arber Selmani, a journalist and editor, called for a protest on Facebook, demanding that the issue be taken seriously by the central and local governments.

“Just by opening the window one can see the reality of the horrible air pollution in Prishtina, and our lungs and our health is being destroyed by exposure to this air, fog, and smog,” Selmani wrote in the event description on Facebook.

“It is time for citizens to protest, to find a solution to this dangerous problem… Each one of us is a victim and no one expects a ‘magic stick’ miracle to solve the problem,” the statement concludes.

On Monday, the Kosovo Government approved the request made by the Ministry of Environment and Spatial Planning to create a task force to address the alarming issue of pollution.

“We need a general mobilization,” Reshitaj said during the cabinet meeting.

Assembly Speaker Kadri Veseli also announced that the Assembly will hold an extraordinary session on Tuesday at 11 am to discuss the issue and plan concrete measures.

“It is important to have a national, long-term plan to avoid this recurring situation,” Veseli said.

Meanwhile, Prishtina Mayor Shpend Ahmeti also promised that representatives from the municipality and the Ministry of Environment will meet on Tuesday to discuss the reduction of traffic and subsidies for public transport during specific times.

He also called on Agim Kuleta, Speaker of the Prishtina Municipal Assembly, to call an extraordinary meeting on Thursday or Friday regarding air pollution.

“The municipality will continue to take short-term and mid-term measures in accordance with the evaluations and analyses by all responsible institutions in the Republic of Kosovo. Next week traffic reductions can be expected due to the current situation,” Ahmeti said.