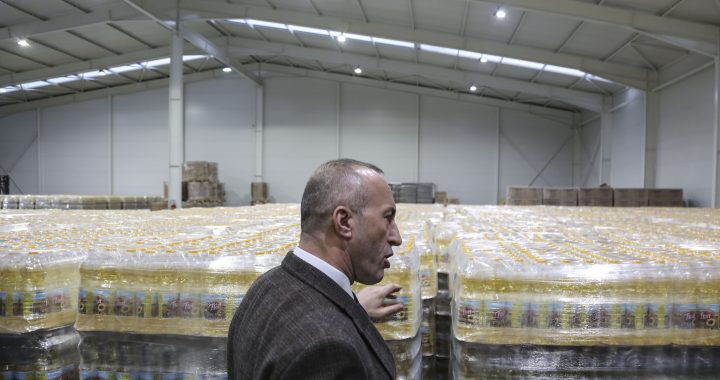 Kosovo PM Haradinaj during a visit to Gjilan. | Photo courtesy of the Office of the Prime Minister.

Ramush Haradinaj suspended his decision to increase his and his cabinet’s pay amid claims that his move to raise the salaries was illegal.

Kosovo Prime Minister Ramush Haradinaj suspended his decision to give himself and his cabinet salary raises after pressure from the Kosovo Assembly and the Anti-Corruption Agency.

In late December, Haradinaj signed a decision to give himself an almost 50 per cent pay raise, a move that was widely criticized. In a jocular rebuttal, the Prime Minister said he needed the raise to buy “shirts and ties,” which prompted Kosovo citizens to playfully collect and donate around 300 ties to the Prime Minister.

According to the Kosovo Anti-Corruption Agency, the cabinet’s decision for the salary increases was illegal. In an opinion, as reported by Radio Free Europe, the Agency recommended that “the decision be sent for a review, and other legal means which do not interfere with the Law on Prevention of Conflict of Interest and other relevant laws should be followed.”

Earlier today, Haradinaj notified that he has temporarily suspended the decision.

“After the request of 30 Members of the Kosovo Parliament to review the constitutionality of the decision to levelize salaries taken on December 20 by the Kosovo government, I have decided to temporarily–until the Constitutional Court takes a decision–suspend this decision,” Haradinaj wrote on Facebook.

A few weeks ago, opposition party MP Albulena Haxhiu reaffirmed that her party Vetevendosje intended to take the decision to the Constitutional Court, maintaining that salary increase decision was “a conflict of interest and a criminal offense.”

The Prime Minister’s decision has a chain effect on other salaries of public sector employees, particularly in the justice sector. The salaries of judges and prosecutors are tied to the salaries of elected high officials.

“My personal concern, and the government’s concern, is that this suspension hits judges and prosecutors the hardest,” Haradinaj said.