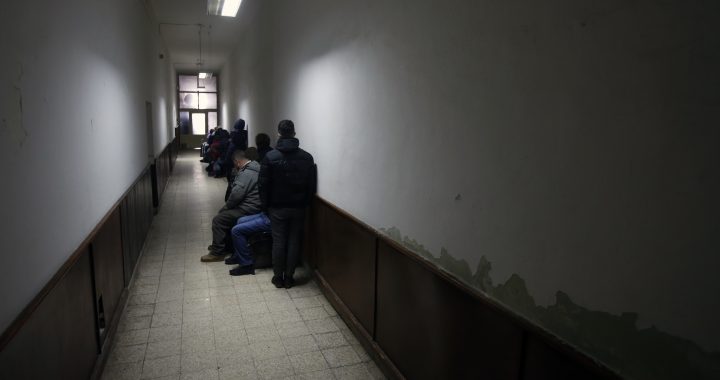 Kosovo migrants wait in a Serbian border police station after they were detained while trying to cross the border between Serbia and Hungary, Feb. 10, 2015. | Photo: Beta, AP Photo/Darko Vojinovic.

We will spend the next 10 years working to repair the damage that has been done over the last 10 years.

Before the war in Kosovo ended, the Office of the United Nations High Commissioner for Refugees, UNHCR, prepared a detailed plan on how to assist the return of refugees to their home. This plan foresaw a gradual, long-term return after NATO troops entered Kosovo. However, when the Serbian forces started to withdraw before NATO soldiers even set foot in Kosovo, about one million refugees immediately began coming back to their homes, many of which had been razed to the ground. Due to a lack of transportation, many refugees made their way on foot. The large droves of refugees formed long rows and slowed the movement of KFOR’s military machinery and the international civil administration.

In his autobiography, UK general and first commander of KFOR Mike Jackson recounts a conversation with a regional UNHCR director, telling him that “the refugee crisis passed quickly, ‘just like spring snow in a thaw.’” Upset, the UNHCR director responded: “Yes, but they did not follow our plan.”

Shortly after the refugees returned, many other Kosovars who had permanent residence in Western Europe started coming back, leaving behind their well-paid jobs to start a new life in Kosovo.

Eighteen years later, a Kosovo citizen pays trafficants between 2,000 and 3,000 euros to illegally cross borders into the EU. Since the declaration of independence in 2008, about 185 thousand Kosovars, or 10 per cent of the population, have requested asylum in the EU, spending up to 550 million euros for illegal migration from Kosovo.

How did we come to this situation: from the massive return, unafraid of land mines only to build a new life on free soil, to jeopardizing one’s own life to move as far away from Kosovo as possible and settle elsewhere?

This is all attributable to a criminal political class and poor international administration.

The state of Kosovo did not achieve freedom: an economic freedom that can ensure a country where political freedoms are guaranteed, human rights are respected and everyone is endowed with equal opportunity. According to the results of a survey conducted by the Ministry of Diaspora, 32.2 per cent of the Kosovo diaspora mentioned economic reasons as primary incentives for leaving the country, while only 8.4 per cent mentioned political reasons.

The lack of economic freedoms is just as grave as the lack of political freedoms. According to Nobel laureate Amartya Sen, economic freedom implies the freedom to sate hunger, to secure enough food, to secure medication, the possibility to dress and have a roof above your head, to enjoy clean water and hygienic conditions, the freedom to become educated, and to protect oneself from epidemics. It is precisely the lack of these freedoms that pushes Kosovars to leave Kosovo. Asylum seekers from Kosovo mention the inability to find a job, the poor conditions of health care and education, and the inability to secure adequate housing and hygienic needs as their reasons for emigration.

Kosovo will celebrate its tenth anniversary of independence and its nineteenth anniversary of liberation as the most isolated and poor country in Europe–with the highest unemployment rate–and as a country that thwarts not only economic freedoms, but also civil and political ones.

Today, every citizen can become a victim of arbitrary violence by the people in power. Some time ago, two high-ranking Kosovo policemen attacked two citizens in broad daylight in Prishtina’s city center. The citizens who reported the attack at the police station were not classified as victims, but attackers. The police changed their statement and suspended one of the policemen only after security camera recordings of the incident were published. No measures were taken against the other one, not by the police, and not by the Police Inspectorate or the prosecution.

Today, private communication is wiretapped in Kosovo without warrants or court orders. In many cases, the wiretaps are used for blackmail or discreditation of people who criticize the government. After a series of accusations against the Head Prosecutor of Kosovo regarding an alleged falsification of his law diploma, wiretaps of journalist and civil society activist Betim Musliu from the Kosovo Institute for Justice were leaked. Although the wiretaps contained nothing incriminating, they were published to signal intimidation and blackmail of critics.

The freedom of political participation is limited because the political class has seized the most important institutions of the country. The current election system discourages new parties to enter the competition due to the high threshold of five per cent needed to have representation in the Assembly, the impossibility of employing observers on election day, or even securing funds for political activities. On the other hand, Constitutional Court decisions from 2014 that allowed the most voted political subject to remain in power even if they do not have a parliamentary majority have made it even more difficult to change governance through elections.

This political class that has taken hold of power uses it for its own personal and clan interests. Today, over 60 million euros of taxpayer money is used for KLA veteran pensions annually, in a process that was conceptualized more as a mechanism for expanding and maintaining a basis of clientele for the parties established during the war than a mechanism that recognizes the merits of real participants of the war.

Similarly, recent moves by the President, Prime Minister and Assembly Speaker to abrogate the Law on the Specialist Chambers were actions that put personal interest before societal ones. Due to this, Kosovo’s relationship with international allies is at its lowest point of the last two decades.

The international revenge for bad governance in Kosovo falls precisely upon the poor and unemployed citizens who remain the most isolated in Europe. We are often told that Kosovars have the government that they deserve, because they could do away with this corrupt political class through elections if they wanted to. But it is not that simple. It was the international community that kept this class in power in the name of stability. Despite the fact that parliamentary elections in 2010 were considered to have had industrial electoral fraud, while the EU observer mission described them as having many anomalies, there was still pressure to establish the government and continue the talks in Brussels. Today, the political class that was kept in power for the sake of stability to the detriment of democracy and development is the same one that is threatening Kosovo’s progress.

There are many people who rationalize the bad governance and deadlock by saying that Kosovo is a new country and that the creation of a just and prosperous society takes time. This is the wrong logic of justification. With every day that passes, the hope for good results dims. If the institutions have been under the heel of the leading class in the past 10 years, it is not going to get easier with time, but much harder. Is the ‘north’ of Kosovo not enough to bear witness to that? Despite the fallacious logic that the ‘north’ of Kosovo will be integrated with time, the opposite happened: 18 years later, the north faces a different reality, and the integration was not easier, but harder with each passing year.