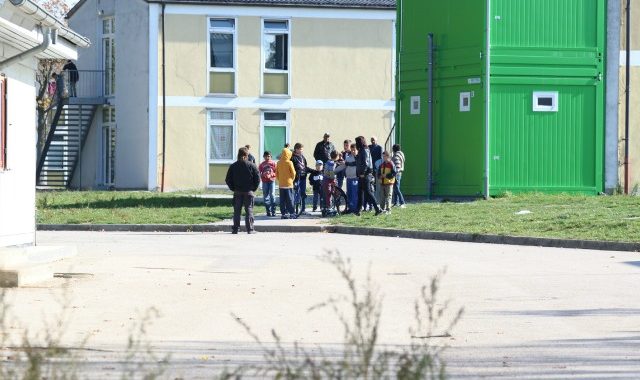 A centre opened in 2015 in the German town of Ingolstadt to assess and repatriate migrants from Kosovo, Albania, Serbia, Macedonia, Montenegro and Bosnia. Photo: Philip Kleinfeld, BIRN.

Illegal border crossings of over 111 thousand Kosovars during the last three years have brought up to 334 million in revenues for traffickers. How much more should the citizens pay for the government’s irresponsibility?

For every kind of demand there is a corresponding supply. The demand of many Kosovars is to travel freely to European countries. While the EU is not ready to fulfill this demand, migrant traffickers are there to fill the void.

Just as loan-sharks are ready to fill the need when banks refuse to issue credit to poor people, traffickers are ready to profit from people in need when they are refused visas, especially when high public officials are involved in illegal visa acquisition affairs.

Uke Rugova, a former MP, is accused of alleged manipulation of visas together with a group of another twenty individuals. According to the EULEX files, the group that Rugova was part of managed to obtain visas through the Italian embassy in Prishtina in exchange for considerable amounts of money. This year, another Kosovo MP, Milaim Zeka, was arrested for allegedly deceiving 920 Kosovars into getting fraudulent visas and making a profit of around 120 thousand euros in the process.

There is also a large group of people involved in the trafficking of emigrants. According to one study on the informal economy in Kosovo — published last month and funded by the European Commission for the needs of the Ministry of Finance — there has been a mild decrease in the grey market, but an enormous increase in the black market. According to this report, it is estimated that in 2015, migrant trafficking brought a profit of 44.6 million euros to the traffickers. This is an enormous increase compared to 2013, when it was estimated that migrant trafficking yielded half a million euros a year for the traffickers. Furthermore, it is estimated that the above-mentioned 44.6 million euros are only about a third of the profits that stayed in-country, whereas the rest of the profit went to the traffickers outside of Kosovo.

From 2014 and until the second quarter of 2017, according to data from Eurostat, 111,430 Kosovars — 6 per cent of the overall population — crossed illegally into EU countries. If we consider a statement from the Kosovo Police that one person could pay 2,000 to 3,000 euros to the traffickers, then we could conclude that the overall illegal crossing of all these people cost a total of 222 million to 334 million euros.

Only around 15 thousand people were repatriated during 2015, a number approximately the same as in 2016 and 2017. All of the returned are poorer than before they undertook an illegal migration route. Some of them have even sold their houses and all of their property to finance their trips. Usually those who attempt to migrate are middle-class citizens, since the poor can not afford the travel costs.

It has been almost three years since Kosovo institutions failed to take any step towards solving the issue of border demarcation with Montenegro, one of the main conditions for visa liberalization. The other condition, that of fighting corruption, is in the process of being ‘met’ by sentencing high cases of corruption with conditional sentences, but in reality, no one is actually punished. On the other hand, the EU decided to become more strict with Kosovo in relation to its fulfillment of visa liberalization requirements — an attitude it did not seem to have towards other countries, from Georgia to Columbia, citizens of which can now freely travel around the countries of the Schengen zone.

Visa liberalization does not include the right to work and live in Schengen countries. But visa liberalization would remove Kosovars from the hands of traffickers. Those 222 to 334 million euros would be spent to travel through legal means, through which citizens could potentially try to create connections that could lead to legal work or training agreements. Otherwise, the people who profit the most from the lack of visa liberalization will continue to be those who benefit from trafficking — some of whom are or were MPs in Kosovo’s Parliament.