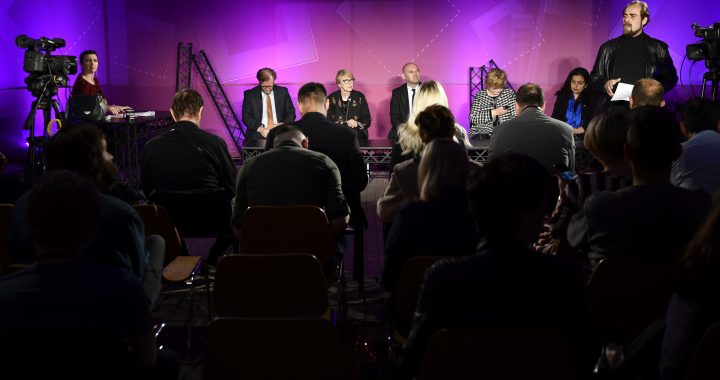 A dialogue for the past and the future

In the last segment of BIRN’s #DebateforReal series on Thursday, government officials and political experts exchanged views on the uncertain future of the dialogue between Kosovo and Serbia, border changes and addressing justice for war crimes.

Political analysts, members of the Kosovo Assembly and the government gathered in front of citizens in Prishtina for an open debate on the normalization of Kosovo’s relations with neighboring countries, which was aired on RTK on Thursday evening.

The debate, in the #DebateForReal series organized by BIRN Kosovo, saw experts and politicians exploring Kosovo’s political position both 20 years after the war and following April’s Berlin Summit hosted by German Chancellor Angela Merkel and French president Emmanuel Macron. The summit, which gathered key Western Balkans leaders together in Berlin, was dominated by discussion of the issue of the dialogue between Kosovo and Serbia.

For panelist Haki Abazi, a political analyst, keeping Kosovo as an issue on the agenda has enabled criminal groups in both countries to preserve their own power. “I remember, it was seven or eight years ago, the issue of Kosovo was ranked as 13th [out of priorities in Serbia],” said Abazi. “But whenever politics has failed to address the issue of pensions, education, welfare, then Kosovo becomes the first issue and, as a result, nationalism in Serbia has grown in order to preserve the interests of a political criminal group.”

For Abazi, the EU’s main concern should be to “normalize countries from within” before aiming to normalize their bilateral relations. “Initially, the European Union should make Serbia a normal state, and Kosovo should be given a chance to emerge from the clutches of crime and corruption. We have similar problems; we have captured states,” said Abazi.

Sonja Biserko, the founder of Helsinki Committee for Human Rights in Serbia, claimed that the direction of the dialogue has changed recently, with other regional actors being involved in the Kosovo-Serbia dispute.

According to Biserko, Belgrade’s intention has been to include Albania in the debate concerning Kosovo’s borders, saying that Belgrade did not manage to do so until Albanian Prime Minister Edi Rama stepped in, allowing Rama to use his role in solving the territorial issue with  Kosovo to “blackmail” the EU to open negotiations for Albania’s accession.

According to her, Rama, Thaci and Vucic’s initiative on Kosovo’s ‘border correction’ was launched secretly along with Mogherini and other actors in the international community.

According to Biserko, changing borders would have several regional ramifications and could increase Russia’s influence in the Balkans. This explains why Germany and France have engaged in the dialogue and removed the idea of changing borders, she said.

On the other hand, political adviser to President Hashim Thaci, Ardian Arifaj, said that no topic of discussion is off the table in Berlin, and that all options are still open.

“No epilogue has been given to any idea in Brussels. The dialogue has not yet entered its final stage. So far, three meetings of the presidents have taken place. We have our state’s dialogue team which, so far, have participated in no meetings, and we are still unaware about the final agreement,” said Arifaj.

“The President [of Kosovo] has repeatedly evoked the immediate and unconditional recognition of Kosovo’s independence by Serbia,” he continued. “Preshevo Valley shall join Kosovo as part of the correction of historical injustices and as a guarantee to preserve the Albanian population in the Preshevo Valley.”

Rada Trajkovic, a Serbian politician from Kosovo, said that people in Serbia are in favor of Kosovo’s partition, and that this, in other words, would mean the end of Kosovo as a country.

“Some intellectuals in Serbia are talking about the fact that they agree with partition, but mere partition does not imply the existence of Kosovo,” she said. “Partition [would occur] in two parts, with a much larger part that would belong to Serbia, and another part that would belong to Albania. With a good campaign, some academic elites would be more in favor [of partition] rather than delimitation.”

Osmani said that the dialogue should continue according to principles of governance, with real ideas and red lines rather than questioning the existence of Kosovo as a country.

“We have been officially informed by the countries that are involved in this process about the truth that certain maps have been opened on certain occasions. This is disappointing because there is a complete lack of transparency for the citizens represented by these two presidents,” said Osmani. “This dialogue should be turned into a dialogue for citizens, not a dialogue for politicians, because we should use the dialogue to solve practical issues that make the lives of citizens easier.”

Osmani also said that various countries have notified that there were secret meetings held between Thaci and Vucic on the idea of partition of the country.

Ardian Arifaj insisted that President Thaci did not hold secret meetings, and that he never mentioned border exchange or border corrections.

Haki Abazi reminded Arifaj of a letter that Thaci sent to Donald Trump in January, describing it as a dangerous statement.

“In a letter sent to President Trump, Thaci said that “We are ready to accept any compromise to reach a final agreement with Serbia,” Abazi recalled.

Vjosa Osmani also recalled two instances where, according to her, the President had held secret meetings and that it was likely such meetings would happen in the future.

“No peace without justice”

Additionally, Osmani stated that there cannot be any peace agreement without bringing justice for the crimes committed during the war.

“If we want to put this process on the right path, we must, of course, adhere to the basic principles on which we negotiate, and I think that everyone should understand, whether they are here in Kosovo, in Serbia or above all, if they are part of the mediator, the European Union, that there is no peace without justice. There was no justice in Kosovo.”

Trajkovic added that we should understand there were “bad Serbs and bad Albanians that did bad things here,” before adding: “We should wait until the Specialist Chambers for Kosovo tries the crimes committed against the Serb victims.”

Osmani reacted by saying that there is an “essential difference” between systematic crimes committed by Serbia in Kosovo and certain crimes committed by individuals from the Kosovo Albanian population. According to her, it should not be forgotten that for a decade in Kosovo. there was an “apartheid” where Kosovo Albanians were denied basic rights such as education, employment and the right to life.

Good governance for all

The audience was also involved in the debate, commenting and posing questions to the panelists.

Miodrag Milicevic from NGO Aktiv was interested to know what the Kosovo government is doing in terms of returning Serbs to urban environments, and promoting a dialogue within the communities of Kosovo.

Abazi said that this should not be seen as an ethnic problem, but as a practical matter of a lack of citizens’ welfare, lack of economic development, health education and health in recent years.

“If 130,000 Serbs had fled, this would have become a political scandal throughout the entire world. 130,000 Albanians did flee, because of the bad governance over the last ten years in Kosovo. Let us not see this as an ethnic problem, let us talk about practical issues, because this approach does not contribute to the well-being of any ethnicity,” replied Abazi.

Trajkovic, on the other hand, noted that her children continue to live in Belgrade, and could never be able to return to live in Prishtina where they were born. Osmani also raised the concern that Albanians cannot return to parts of northern Kosovo, which today is predominantly inhabited by Kosovo Serbs.

Biserko insisted that the state of Kosovo should do more for all citizens regardless of their ethnicity.

Osmani echoed Abazi’s claims, stating that improvements in security terms especially were marked in recent years, explaining that many issues relevant today are not related to ethnicity.

For Osmani, the most endangered Serbs in Kosovo are those living in the north, because they are endangered by gangs financed by Vucic, and not by Albanians, she said. Osmani concluded by noting that in areas in Kosovo such as Kamenica and Gjilan,  Albanians and Serbs are able to live together with no tension.