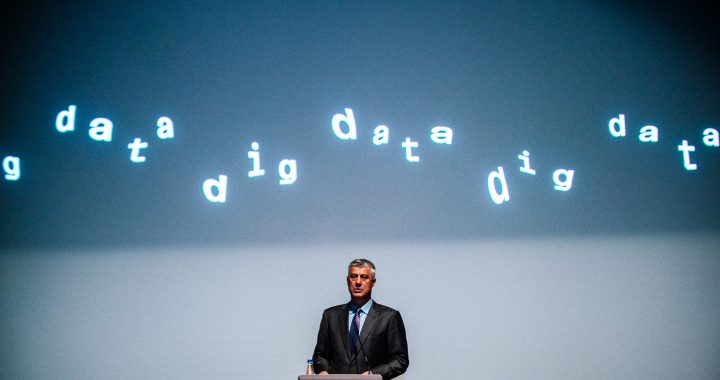 Has Thaci changed his rhetoric?

Thaci’s discourse on the Association of Serb Municipalities has altered. Now, he openly refers to it by its Serb name ‘Zajednica,’ initially used by opposition party Vetevendosje.

The president believes that the dialogue with Serbia will be a “a win-win” situation. Despite the red lines drawn above, Thaci continued to bolster his idea that Kosovo will demand that the Presevo Valley joins Kosovo, and that Serbia recognizes Kosovo’s independence.

Either Thaci is trying to sell the border changes as a silver bullet, or he does not quite understand the concept of “win-win” in international relations. Even the most naive person would pose the question: what does Serbia win in this scenario?

Perhaps Thaci’s vocabulary does not include the word compromise, but his political deeds were littered with them. One only needs to look to Kosovo’s independence, which he referred to as a compromise on many occasions.

Now, possibly, theoreticians of diplomacy and international relations would defend the president. You always have to go with maximalist demands in order to get the upper hand at the end of each negotiating phase, they would say.

But, the recent political past between Kosovo and Serbia and the reality on the ground have been very different from the theory. Remaining true to his nom de guerre, Thaci leaves snake-like tracks in his wake, shaping the political reality pre- and post-independence, where compromise has always prevailed.

Although Kosovo became independent in 2008, with former Prime Minister Thaci reading the declaration of independence, one cannot forget the compromises made in that process, which raised serious questions about the very essence of independence.

The inability to form Kosovo’s army due to the resistance of Kosovo Serbs in the assembly is exemplary of Thaci’s latest claims―a farce. Certainly, Thaci was not alone in this process, and others have responsibility for such compromises in the past, but Thaci’s leading role remains nonetheless.

Like with other claims, Thaci remained steadfast and firm when he said, “As a president, I will not allow Zajednica to be installed in Kosovo.”

Thaci has never before referred to the Association of Serb Majority Municipalities, ASM, as “Zajednica” which is a Serbian word, used to describe the agreement on the ASM which was signed in August 2015.

After the agreement was signed, the opposition parties, and in particular Vetevendosje, referred to the ASM in Serbian as “Zajednica.”

Thaci was among those who criticized the opposition for inciting “nationalism” by using this term, and attempting to shine a bad light on the deal by using a Serbian word to refer to it.

Zajednica means “community” in Serbian and as such it is not a bad word. Although not offensive, when Albanian politicians use this word in the Serbian language, it is understood as an encouragement for Kosovo Albanians who are listening to this to build an aversion towards this agreement.

In reality, this week proved that yesterday’s “Zajednica” was not a lapsus linguae of Thaci, as Democratic Party of Kosovo, PDK, leading figures such as Kadri Veseli, Abelard Tahiri, Uran Ismajli used the term “Zajednica,” in unison in their public appearances. For PDK to appropriate what was initially Vetevendosje’s discourse (that was then used also by AAK when in opposition) is something new.

When analyzing the vocabulary of leading PDK figures, one understands that this is not only a matter of tautology, but also a political maneuver.

This signifies a fresh campaign to blame former coalition partner LDK, or Isa Mustafa, the leader of the party, for having signed the agreement on ASM back in 2015 with PDK, an agreement which derived from a 2013 agreement between Thaci and Dacic. Although Thaci was the first Kosovo politician who signed an agreement that implied the formation of the ASM, he is now using a discourse to blame LDK for it.

When in December 2015 the opposition organized protests inside and outside the Kosovo Assembly building against the ASM agreement, Thaci and PDK’s leadership accused the opposition of cultivating a climate of hatred against the Serb community in Kosovo. Often in their discourse you would hear condemnation and criticism for the usage of the term “Zajednica.” The question now is: why is calling the ASM agreement “Zajednica” not offensive towards the Serb community now that it has entered their vocabulary as well?

Paradoxically, the president and PDK officials seem to have forgotten that as a coalition they were cohabiting with LDK, that Thaci was a deputy prime minister and foreign minister in Mustafa’s government, and was sitting alongside Mustafa in the meetings with Federica Mogherini, High Representative of the EU for Foreign Affairs and Security Policy, when the agreement was signed.

After the 2015 deal was struck in Brussels, PDK continued to govern with LDK. If the Association agreement had entered into force as it was in 2015, it “would not be in the spirit” of Kosovo’s constitution, as was confirmed by the Kosovo Constitutional Court ruling that came afterwards. Considering that, why did PDK continue to govern with a party that was sealing deals that endangered Kosovo’s sovereignty, and created this “Zajednica”?

This explains the dedication of Thaci and PDK leaders to defend the constitution, the sovereignty and territorial integrity of Kosovo. But can we truly believe that a new PDK leadership in the years to come would never blame Thaci for signing a bad deal?

Mustafa reacted to the comments on Tuesday, denying Thaci’s accusation and explaining that in fact, the 2015 agreement on the ASM was derived from the so-called “landmark deal” that was signed by Thaci in 2013, which is correct.

Back-and-forth accusations are trivial, but they show the machiavellianism of Kosovar politics: from an unwavering defense of the agreement on ASM, just years later, we see that the very same exponents have turned their guns against it.

Is this because Thaci wants to re-brand himself as a nationalist, after years of trying to shed his guerrilla image, in order to be considered as a liberal political partner for the international community?

While these days hurling accusations makes fertile ground for scoring political goals, this will only serve to augment mistrust in the leadership of Kosovo for any deal they tailor. On top of this, this kind of language still derives from the old ‘90s style of politicians in the Balkans that aim to fuel ethnic hatred.