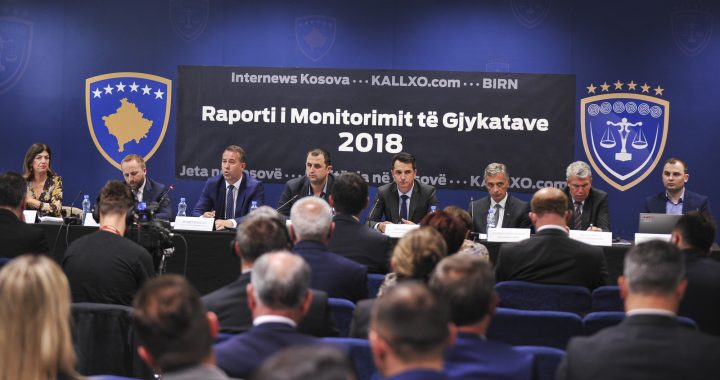 A new report by the Balkan Investigative Reporting Network, BIRN monitored courts and prosecutors in Kosovo and found they are still failing to get adequate results in the fight against corruption.

BIRN Kosovo’s new report, which highlights failings by the country’s courts and prosecutors in tackling corruption cases in 2018, was launched at an event in Prishtina on Thursday.

All the result show that there is a deterioration in the fight against corruption in terms of the number of accused persons as well as in the number of punishable verdicts.

“The worrying findings of the report show that courts have lost their battle with corruption,” said Labinot Leposhtica, the author of the report and head of the BIRN Kosovo legal office.

The report found that of the total of 27,867,583 euros that were sequestrated by the judicial authorities in all cases in 2018, only 49,393 euros, or 0.1 per cent of the total amount, were confiscated. No money was confiscated in corruption cases.

A total of 152 people accused of corruption received no sentences because of acquittals or because the cases were dropped. Only 65 people were sent to prison.

However, during a panel discussion at the report’s launch, chief state prosecutor Aleksander Lumezi insisted that the prosecution had been more efficient last year than in 2017.

“Today we have among defendants former prime ministers, former ministers, current ministers and heads of public enterprises, mayors, judges and prosecutors, also many members of criminal gangs. The state prosecution has shown that it is ready to face anybody,” Lumezi said.

Doing more to tackle corruption is one of the conditions imposed by the European Commission to grant Kosovo visa liberalization for travel to the EU.

“As a result of the obstructions to wealth confiscation, we have launched an initiative to draft a new law which provides efficiency in this regard,” said minister Tahiri.

Supreme Court judge Valdete Daka argued meanwhile that some courts have shown bias in favour of defendants in corruption cases.

“The Supreme Court has concluded that in some cases, lower instance courts have favored defendants in specific cases, justifying this by saying they do not have enough proof, but not properly justifying their decisions,” said Daka.

“When it comes to economic crimes, some indictments are deficient. This is because the judges and prosecutors unfortunately do not properly understand the essence of the law about [public] procurement,” she added.

Hasan Shala, the head of the Appeals Court, responded to Daka’s criticism by saying that sometimes the decisions of the Supreme Court are not clear enough and do not include specific suggestions.

“I would ask the Supreme Court to give more concrete recommendations when they send cases back for retrial,” said Shala.