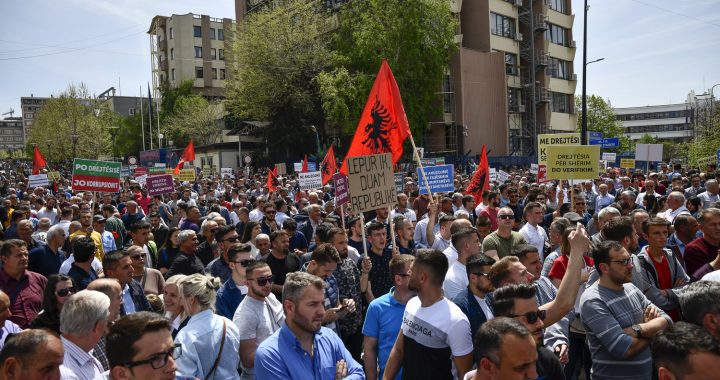 More than 1,000 people gathered outside the Office of the Chief State Prosecutor in downtown Prishtina on Friday, with opposition party MPs calling for the resignation of prosecution head Aleksander Lumezi.

Carrying banners reading “YES to Justice, NO to corruption,” “Leave Rabbit, We Want a Republic,” and many others, over 1,000 demonstrators attended a Prishtina protest organized by political opposition party Vetevendosje named ‘Against PAN thievery,” referring to the corruption that has been linked to members of the ruling coalition parties in the last few years.

Friday’s protest called for the end to impunity enjoyed by top state officials in the country, with Vetevendosje criticizing the complicity of the state prosecution failing to investigate serious economic crimes.

As members of Vetevendosje addressed the crowd, protestors surrounded the Office of the Chief State Prosecutor with yellow tape, reading ‘danger.’

With protestors chanting “There is no state with thieves,” Vetevendosje MP Albulena Haxhiu addressed the crowd, stating that “Our protest will be peaceful, but there is no peace with thievery,” before adding that the protests will continue into next month.

Glauk Konjufca, the chief of Vetevendosje’s parliamentary group at the Kosovo Assembly, said that the justice system in Kosovo has “collapsed.”

Highlighting the lack of investigations launched into top state officials, speakers at the protest read out four simulated ‘indictments’ that Vetevendosje asserts the prosecution should have issued.

The second demanded investigation into Pal Lekaj, current Minister of Infrastructure, who is alleged to have unlawfully given 53 million euros of public money to US-Turkish construction company Bechtel Enka following the construction of a highway from Prishtina to Skopje.

Vetevendosje’s third indictment was issued to President Hashim Thaci, for using the state’s budget to pay for the publication of his biography in February 2018 named ‘New State, Modern Statesman.’

Finally, Vetevendosje demanded investigation into prosecutor Aleksander Lumezi himself, referencing the claims made in late 2017 that accused Lumezi of falsifying his jurisprudence exam to join the Kosovo Bar Association.

One large banner was spread outside the state prosecution office, reading “Dear Mr. Chief State Prosecutor, you are sleeping over crime files. You have to go, because we love a Kosovo without crime and corruption.”

A number of protestors held placards with illustrations of a rabbit with a snake around its neck, intending to symbolize the close relationship between Kosovo President Hashim Thaci, whose nom de guerre during the Kosovo War was ‘The Snake,’ and Aleksander Lumezi, who has been called ‘a rabbit’ by Vetevendosje officials on account of his fear and inability to investigate or indict members of the ruling parties in Kosovo.

According to Vetevendosje, Friday’s protest is the first in a string of demonstrations and gatherings across Kosovo that the opposition party announced at the beginning of April, aiming to drum up support for early parliamentary elections.