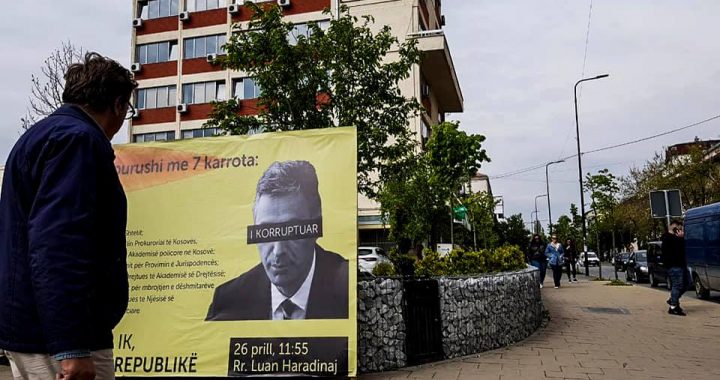 Opposition party Vetevendosje have organized a protest in front of the State Prosecution office on Friday, calling to widen the scale of protests ‘against thievery.’

Opposition party Vetevendosje called a protest to be held at noon on Friday in front the office of the chief state prosecutor, Aleksander Lumezi.

This is the first in a new wave of protests and gatherings across the country that Vetevendosje announced earlier this month under the slogan “Kunder PANHajnise,” meaning “Against PAN’s Thievery.”

Vetevendosje, who called the protest on Sunday, aims to incite early parliamentary elections by drumming up support for a vote of no confidence, the subtitle of the slogan reading “early elections.”

According to Vetevendosje, the control of state institutions by the political elite is at its peak presently, and the impunity of corrupt politicians from indictment and prosecution continues.

“There have never been more corrupt ministers in Kosovo. However, no minister of the cabinet is scared of the chief prosecutor Aleksander Lumezi, and Lumezi is afraid of every one of them,” reads the press release from Vetevendosje, before calling Lumezi a “rabbit,” referring to the prosecutor’s fear and inability to launch investigations into the conduct of high level politicians in the country.

“This rabbit does not have the place in the street that is named ‘Lion,’” the press release continued, making reference to the street where the office of the prosecution is located, Luan Haradinaj. “Luan”, in Albanian language means lion.

The Kosovo Prosecutorial Council, KPK, condemned the language used by Vetevendosje against the chief prosecutor of Kosovo, calling it damaging to the image of the office of state’s prosecutor.

“The Kosovo Prosecutorial Council expresses deep disappointment towards the propaganda, insulting, degrading and threatening language of Vetevendosje, which aims to damage the integrity, independence and image of the prosecutorial system,” read the reaction of KPK on Tuesday.

Vetevendosje criticized the prosecution for not being competent enough to fight corruption, particularly after the so-called ‘Pronto affair,’ a scandal involving leaked phone calls uncovered in the summer of 2016, where leading figures of the ruling Democratic Party of Kosovo, PDK, were appointing members of PDK to public positions.

An indictment was issued in April 2018 against 12 officials from PDK, including Adem Grabovci, the former chief of the PDK parliamentary group, for alleged unlawful appointment of party members to state institutions. While the trial process has begun, no decision has been rendered by Prishtina’s Basic Court so far.