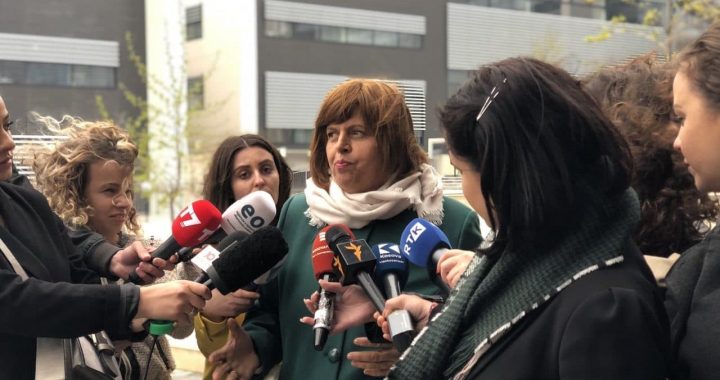 Lawyer Fehmije Gashi Bytyci, who defends one of the women returned from Syria, giving an interview after the court session finished on Tuesday. Photo credit: BIRN

After a group of 110 people were repatriated from Syria last Friday, the court has placed ten of the women under house arrest pending possible trial, while the rest are expected to go before the court on this week.

The court of Prishtina on Tuesday placed 10 women repatriated from Syria under one month of house arrest, saying it suspected they had committed the crime of joining a foreign military or police force. If they are found guilty, they could face up to 15 years in prison.

The court in Prishtina said there was well founded suspicion that the defendants had been in the conflict zone of Syria-Iraq from 2014 until April 20 this year, when they were returned.

A total of 110 citizens of Kosovo were repatriated from Syria last Friday, of whom 74 were children, 32 were women and four were men. Nine children returned without parents because they were killed in the fighting in the Middle East.

Special Prosecutor Syle Hoxha told BIRN that all 32 of the women returnees were now under investigation by the special prosecutor’s office.

“The investigation started some time ago but was interrupted because the persons were not in the territory of Kosovo, which made it difficult to continue the investigation,” Hoxha told BIRN.

“The court ruled house arrest for all the women, having taking into consideration that all of them have families and children to take care of. All of them are already living in the homes of relatives,” lawyer Fehmie Gashi Bytyci, who represents one of the women, said.

The three adult male returnees, Arijanit Kryeziu, Visar Qukovci, Agon Misini, plus a minor named R.T. were immediately detained by police on returning and sent to the high security prison in Dyz, also for one month.

Arijanit, from Ferizaj is suspected of having taken part in terrorist activity in Syria. There has been an international warrant for his arrest since 2018.

The request submitted by the prosecutor for custody, which BIRN has seen, says the Kosovo Police received evidence from the FBI in the US the moment the group returned to Kosovo.

Since 2014, the Kosovo prosecution has filed indictments against 119 Kosovars for terrorism-related charges, while 156 others are under investigation, chief prosecutor Aleksander Lumezi told the media on Saturday.

At least 400 citizens from Kosovo ended up in the conflict zones in Syria and Iraq, where Islamic State, ISIL, was attempting to create an Islamic Caliphate. Around 80 of them died there, as BIRN has reported. Since the collapse of the so-called caliphate, Syrian authorities have been attempting to repatriate captured foreign fighters to their home countries.