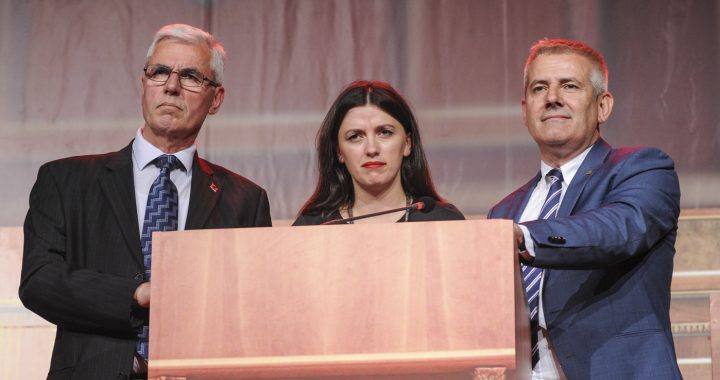 MP candidates clash on rule of law, blaming each other for a dysfunctional judiciary

MP candidates debated on the formation of Kosovo’s army and corruption within the country’s justice system in the fourth election debate moderated by Jeta Xharra.

Kosovo MP candidates gathered for a heated discussion on the rule of law, security, and corruption for #DebatPernime’s fourth election debate, though the conversation was also peppered with some personal insults between the rivals.

The Democratic Party of Kosovo, PDK, representatives were once more missing in action after having been rejected to be considered as a single party instead of a coalition.

Vjosa Osmani-Sadriu, a representative of the Democratic League of Kosovo, LDK, started the debate by explaining her coalition’s vision of reforming the judiciary system by regular auditing every six months.

It was a good start to an evening that quickly deteriorated into personal accusations and lost focus from the major issues at hand from rule of law to the parties’ stances on establishing the Kosovo army.

Throughout the debates, election rivals blamed PDK for capturing the judiciary system. Osmani-Sadriu blamed President Hashim Thaci for stepping back from the formation of the army, insisting that LDK supported it from the get go.

Vetevendosje MP Albulena Haxhiu chimed in that “judiciary system capture” was the biggest problem in the rule of law.

“Vetevendosje will work a lot on ‘uncapturing’ the judiciary system. To this day judges are appointed from a single Adem Grabovci call, like in the Pronto [affair],” Haxhiu said, referring to the series of leaked wiretapped conversations between PDK high officials.

Meanwhile, the Ashkali Party for Integration representative Qazim Rrahmani said justice in Kosovo would only be realized when “one would not be looked at as a majority or a minority.” Rrahmani also proposed to increase the justice budget and digitalize it.

Milaim Zeka, a former journalist who has recently joined the NISMA party, said that the justice system needed to be reformed urgently, whilst blaming his coalition partner PDK and its former governing coalition partner, LDK, for the failures in justice.

The debate quickly turned to corruption, which Vetevendosje representative Xhelal Svecla said they fight every day in the municipality of Prishtina, the only city Vetevendosje currently governs.

Svecla and his fellow panelist Sami Kurteshi, former Ombudsperson and MP candidate for Vetevendosje, also said that Kosovo should go beyond the “legal state” and aim to be a “state of justice.”

“Governance should happen with a little bit of ethics, and not only based on law,” said Svecla.

Korab Sejdiu, representing Behgjet Pacolli’s AKR, which is currently running in a coalition with LDK and the recently established Alternativa, claimed his own personal experience as a lawyer as proof that he is active in the fight against corruption.

“I represent Rozafa Koliqi, just like many other cases,” said Sejdiu, referring to the whistleblower who recently revealed on Jeta ne Kosove the unjust promotion at the UP Faculty of Medicine. “This is what we’re trying to do with the great people on our MP list: to put this country in order, to bring justice to this country.”

Vetevendosje MPs claimed that there was no judge or prosecutor bold enough to go after the big politicians. They only go after the middlemen and political activists, they claimed. In response, Korab Sejdiu insisted that there were many judges and prosecutors who did their job fearlessly, and that one should not generalize.

The debate moved on to terrorism, a hot topic in Kosovo ever since a New York Times article declared Kosovo “fertile ground for ISIS.”

“We condemn terrorism,” said Asllan Kryeziu from the PAI. “In our opinion, there’s no radicalism in Kosovo. In fact, Muslims were offended by being called such.”

Vetevendosje MP candidate Svecla complained about the anti-terror laws being used against opposition activists. Four Vetevendosje activists, and MP candidates are currently being detained under the accusation that they attacked the Kosovo Assembly with an RPG device last year.

“Extremism happens as a result of lack of education, as a result of the destruction of the system of values,” continued Svecla, saying that the previous Kosovo leaders were to blame for young people embracing “principles foreign to us.”

Meanwhile AKR’s Sejdiu offered: “Kosovars left for foreign wars because they lost the hope to live in Kosovo.”

Osmani-Sadriu on the other hand downplayed the problem, arguing that other western countries also had issues with extremism, which proved that extremism had many contributing factors.

“Although we are the poorest community, although we’re the most Muslim community – no Ashkali has left for foreign wars,” he said, blaming the Kosovo Islamic Community and the police for not being sufficiently engaged in building trust amongst citizens.

“When LDK headed the Ministry of Internal Affairs, the numbers of Kosovars going to Syria went down from 300 to 75,” declared Osmani-Sadriu jubilantly, just before VV’s Kurteshi took the floor to blame Enver Hoxhaj, Kosovo’s departing Foreign Minister, for inciting young people to go and fight for ISIS.

Nisma’s Zeka reacted immediately, saying that Hoxhaj was to be blamed for encouraging young people to go and fight Syria’s leader Bashar Al-Assad in 2012.

“If Enver Hoxhaj would have supported ISIS, I guarantee you, he’d be in Guantanamo,” said Zeka.

The debate deteriorated further when upon being accused of having joined a mafia party from Vetevendosje’s Haxhiu, Zeka responded: “we’re all the same shit.” The MP candidate’s statement provoked protest from Kurteshi, who called Zeka a clown.

The unsavory discussion was soon overcome with the moderator Xharra moving on to a short question and answer session about policy changes that the parties planned to implement.

All parties agreed that the government should not be involved in penalizing judges and prosecutors and agreed that this was within the competences of the judiciary councils alone. They also agreed that the Kosovo Police should have life insurance, and that investigations into political murders after the Kosovo war should be conducted.