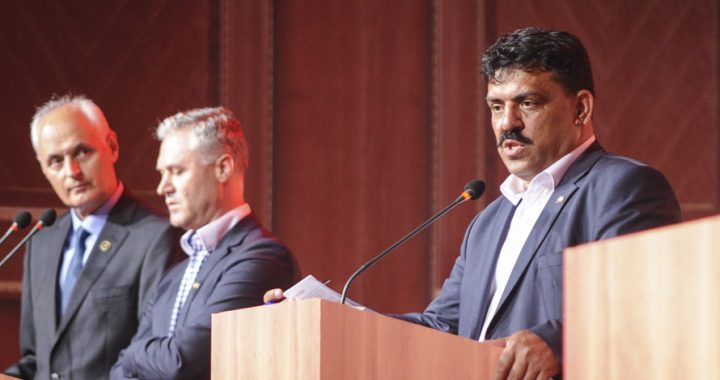 MP candidates debate on the education crisis and Kosovo’s diaspora

The publication of the international PISA test results last December–according to which 77 per cent of Kosovo’s 15 year olds failed the literacy test–raised the alarm about Kosovo’s failing education system. Candidates running for parliament across the aisle shared the concern and revealed their plans to improve education and to foster cooperation with Kosovo’s diaspora on #DebatPernime’s third election debate.

The Democratic Party of Kosovo, PDK, continues to not participate in the debates, demanding that they get three times more airtime than Vetevendosje, and almost two times more airtime than LDK-AKR coalition. The request was deemed illegal by the Independent Media Commission, KPM, and was criticized by the Kosovo Association of Journalists.

Representing the Democratic League of Kosovo, LDK, former deputy Foreign Minister Valon Murtezaj started the debate by saying that education was a priority for the LDK-AKR coalition.

Vetevendosje then echoed the sentiment.

“Education needs to be declared a national interest and we need to increase the budget for education,” said former Vetevendosje MP Ismail Kurteshi.

“We will open 160 new kindergartens,” said Arberie Nagavci, Vetevendosje MP candidate and the Director for Education at the Municipality of Prishtina. She also added that the budget would be increased by 200 million euros each year.

Meanwhile, representing one of the smaller parties running in the elections this year, Danush Ademi from the Ashkali Democratic Party of Kosovo, PDAK, reminded everyone that more attention should be paid to the minority communities, and that this should be reflected in the budget.

“The Ashkali community loves education, but we’ve lagged behind since the 1990s,” said Ademi, adding that 4,600 Ashkali children are in schools, while 175 Ashkalis are studying at the university level.

Although lacking their main partner PDK, the PAN coalition, represented by AAK’s Jonuz Salihaj, said they had a 21-point program for education.

“Number one on the list is the unification of the education system, which is the biggest wound. We have a curriculum that needs to be applied to every school. We will focus on inclusion,” said Salihaj, commenting on the diverging curricula students from different communities are taught.

The debate quickly heated up when the moderator Jeta Xharra asked them point-blank how they would change the PISA test results.

“Not everyone should get a diploma if they don’t have basic knowledge. Teachers should be paid on performance,” said Salihaj, adding that by the end of their governing mandate, Kosovo would jump from the third to the last on the PISA ranking to somewhere in the middle of the list.

Meanwhile, a soft spoken Kurteshi said that such changes cannot happen that rapidly. He nevertheless was optimistic that improvements would happen if more emphasis was placed on having qualified staff.

“The achievements of students need to be seen as an assessment of educators,” said Kurteshi.

“When Vetevendosje comes to power, education will be free,” said Faton Topalli, who is currently on trial for setting off tear gas in parliament.

Murtezaj from LDK skirted the issue altogether, disputing whether the test was conducted properly to begin with.

“We need to know how the sample was chosen. We have evidence that it didn’t go according to parameters,” said Murtezaj, who nevertheless admitted that flaws should be accepted.

Murtezaj’s questioning of the test received a round of criticism from his fellow panelists.

“The sample was good, nobody can contest PISA, which is the most credible test conducted in OECD countries,” Salihaj retorted, adding, “the results are more than fair – they should have been even poorer.”

Arberie Nagavci also echoed Salihaj’s defense of the PISA test’s credibility. Meanwhile, AKR’s Labinote Demi-Murtezi, who was previously an MP as part of the Justice Party, called for ending party influence on schools.

“We need to depoliticize the schools and hire competent people,” said Demi-Murtezi.

The debate also turned to the Kosovo diaspora, which to this day continues to support Kosovo with cash flow. In 2016 alone, 691 million euros in remittances were sent to Kosovo.

Murtezaj said that this was a positive thing, adding, “Why shouldn’t they send money home?”

NISMA’s Kadri Gervalla said that his party was in daily contact with diaspora.

“We will be in touch with them to make it easier to invest. The diaspora will be closer to Kosovo with this coalition – they’ve given so much for Kosovo, and take so little.”

Topalli from Vetevendosje explained the party’s plans to incentivize students and experts to return to Kosovo.

Towards the end of the debate, the discussion turned once more to campaign programs and promises and the crisis at the biggest public university in Kosovo, the University of Prishtina, which is grappling with a series of plagiarism and unjust promotion scandals.

The PAN and LAA coalitions did not think that government officials should be banned from teaching in one or more schools, since the law allows for it. “We’re a center-right party, we want people to make money,” said a solemn Murtezaj.

“One thing is for sure, until we have a separation between ministers and the University of Prishtina lecturers, nothing will change,” added Ademi.