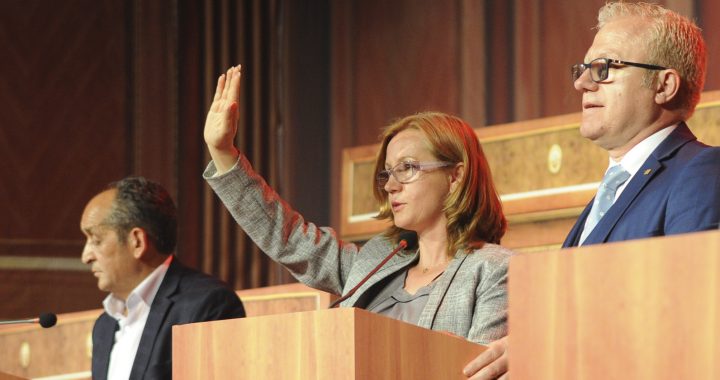 In the second election debate, representatives from NISMA, the LDK coalition, the Kosovo New Roma Party, and Vetevendosje discussed corruption and hashed out differences in their economic platforms.

On Thursday night, Kosovo MP candidates debated on the economy and the state budget in the second electoral debate hosted by KALLXO.com and broadact on RTV 21.

Unlike the first night, when the Democratic Party of Kosovo, PDK, and NISMA boycotted the debate, on Thursday NISMA was represented by Shyqri Bytyqi.

The other coalition partner representative was Haki Shatri, member of the Alliance for the Future of Kosovo, AAK, and former Minister of Finance.

The two experts on finance and tax administration faced a self-titled “expert trio” from the Democratic League of Kosovo, LDK, and the New Kosovo Alliance, AKR.

The debate began with LDK MP Sokol Havolli, an advisor to the departing PM Isa Mustafa, insuring that the LDK economic platform will focus on development and increasing the state budget.

“We expect economic growth from four to eight per cent, and this growth will be translated into an increase in revenues,” said Havolli, who insisted that the team had no competition in the room “because [their] team included the best economists.”

Throughout the debate, his fellow panelists from rivaling parties joked about Havolli’s “expertise.”

“Today I feel comfortable, because we never promised to raise the budget to five billion euros. We’re not as good of an expert as the previous speaker,” he joked.  “We will implement fiscal reforms, especially on individual income… We will have a different attitude towards the economy – it will not be based on privatization, but revitalization.”

The LDK coalition’s PM candidate Avdullah Hoti, also the departing Minister of Finance, is known for increasing Kosovo’s budget to two billion euros for 2017 and introducing a fiscal reform, both of which have been criticized by economic experts. The AAK and NISMA representatives shared much of the criticism, while Vetevendosje’s MP candidate Shqipe Pantina also said that there was no proof that the fiscal reform increased revenue.

After the debate was shortly adjourned for iftar, the break of fast for the holy month of Ramadan, moderator Jeta Xharra asked the MP candidates if Kosovo President Hashim Thaci should decorate Murat Mehmeti, a member of the tax investigations unit at the Kosovo Tax Administration, who exposed “industrial scale tax fraud” as a whistleblower last year.

Kujtim Pacaku, MP candidate from the Kosovo New Roma Party, KNRP, said: “We should have no mercy for those who don’t respect the law. All forms of corruption should be denounced – we should all be Murat Mehmeti.”

Havolli argued that under LDK governance, tax evasion plummeted in Kosovo, while the new Kosovo Custom Director, “a professional,” was selected through a fair process spearheaded by a British company. Havolli also said that LDK created new jobs and transformed the informal economy into formal employment positions.

Driton Tali from Vetevendosje responded: “There can be no fight against tax evasion without justice reform, and their bosses won’t allow this because their interests will be attacked. Vetevendosje’s 40-point program emphasizes the vetting process of the justice system.”

“We need to empower the Labor Inspectorate to fight tax evasion. We need to increase the number of labor inspectors,” added Pantina.

Throughout the evening Havolli accused the other debate participants of not having an economic program, to which Vetevendosje’s Tali responded: “We cannot promise a six-seven billion euro budget, we will not promise to remove visas in three months.”

Pacaku, representing the only smaller party in the discussion tonight, tried to steer the conversation back to actual fiscal reform.

“We’ve lost culture in Prizren, Ferizaj and Prishtina by taxing small artisan producers. The culture of craftsmanship, of silversmiths, is disappearing,” he said arguing for tax break for small businesses.

Tangible plans were revealed once the moderator Xharra pressed each coalition and party to state explicitly whether they would increase profit tax, VAT, income tax, service and excise tax.

Both NISMA and LDK-AKR said they would not increase profit tax, while Vetevendosje said that it would decrease taxes for smaller companies and increase them for bigger ones.

None of the parties would increase the VAT, but would expand the list of goods that get taxed at only eight per cent. LDK representative Agim Krasniqi claimed that this is all foreseen in Avdullah Hoti’s “Fiscal Package 2.”

Similarly to the other parties in tonight’s debate, Vetevendosje promised to restructure taxation, claiming it would decrease service tax and increase tax on luxury products.

Unlike the two center-right coalitions PDK-AAK-NISMA and LDK-AKR, Vetevendosje said that it would apply a progressive income tax plan and would give tax breaks to businesses outsourcing services.

“We should encourage new services, especially in IT. Kosovars can outsource services,” said Pantina.

Towards the end of the debate, NISMA’s Bytyqi criticized the approach of the LDK-AKR trio, claiming that economic development was much more than simple fiscal reform, which he assessed as not even a reform but as a “fiscal modification.”

“For Nisma the most important sector, the easiest and the most opportune one, is agriculture. We should focus all our fiscal reforms on encouraging agricultural production,” said Bytyqi.