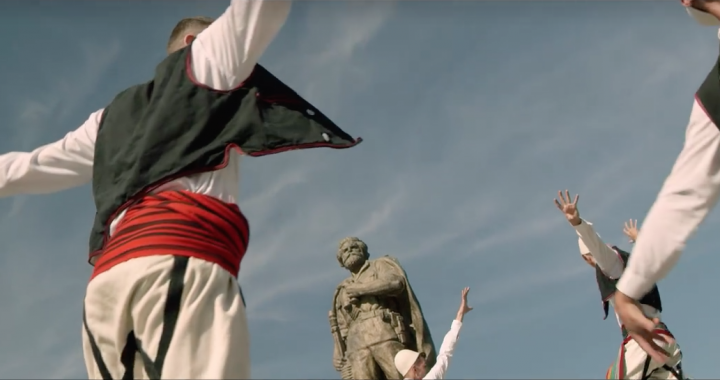 Still image from campaign ad for the Haradinaj-led coalition.

What this election is about

The entire country is being suffocated under an avalanche of bullshit in what best can be described as a clownish political roadshow masquerading as democracy in action.

Political campaigns, like the one in Kosovo right now, are cacophonous human affairs where politicians—seasoned and newbies—trade jabs, insults, cajole, utter falsehoods, stretch vulnerable truth, dig up dirt and throw it at each other, and do just about whatever it may take to win the election. Sleazy political tactics during election season are nothing new. They were recorded as far back as first century Rome (BCE) when Quintus Cicero, a Roman political strategist, trying to elect to office his famous brother Marcus Cicero, wrote a Short Guide to Electioneering. In it he advised his brother to promise as much as possible to voters. “People naturally prefer you to lie to them rather than be truthful that you can’t accomplish as much,” Quintus delivered in his most famous piece of advice. Now, as then, voters  everywhere crave answers, uplifting messages and promises that better days are ahead and that these office-seekers can deliver on those promises. Almost no politician who wants to be elected can afford to eschew truth-twisting and political sleaziness during a campaign.

This may be a cynical take on an otherwise opportune moment for change in Kosovo, but let’s be honest about it: no substantive policy discussion that would bring positive change has taken place up to now and none is expected for the duration of the campaign. Damning as it is for this struggling country, this election seems nothing more than another dispiriting lurch of a political class marching in an uncertain direction with bleak prospects. It almost seems that whatever democracy Kosovo can afford, it has sunk to a basic maneuvering instinct of just shuffling political parties around as they split, merge or spin off or make whatever deals imaginable to win. Voters are suddenly caught in a whirlwind of nonsense and political horse trading and who-did-what-and-went-where meaningless claptrap that dominates the news cycle twenty four hours a day. The entire country is being suffocated under an avalanche of bullshit in what best can be described as a clownish political roadshow masquerading as democracy in action.

What then? Where does one go from here? Does voting in this election mean anything for the poorest and the most isolated citizens of Europe? Anything for a young Kosovar with no education, poor training, no job, and no real prospects? Anything for an entire generation of schoolchildren stuck hopelessly at the bottom of an education system that does not nurture, but insults their intelligence? Anything for the old or the sick who dread the horror of the so-called health care provided by doctors who have long declared professional and moral bankruptcy?  Anything for anyone except these ruthless politicians and their families and children? Anything at all? These are hard questions and the reality is that the outcome of this election will probably address none of the above, not in a meaningful way. But that is not as hopeless as it seems.

Accumulated experience has shown that sometimes elections are less about presenting real policy choices than about political shuffling and institutional shake-up as represented by new people, new ideas, however inadequate or imperfect they may be. It is easy to lose sight of how important this perfunctory and seemingly symbolic act is for a feeble democracy like that of Kosovo. It is this institutional shake-up, therefore, that this election seems to aim at, not to bring about any significant and positive change to a host of grave issues or spur economic development. Kosovo’s road to a viable economy with a productive labor force and decent standards of living is a long one; one or two elections cycles will not be able to shorten that, but will provide the dynamism that feeds into necessary disruption of political entrenchment and status quo. Understood from this vantage point, this election is in the service of Kosovo’s democracy, however abstract that may sound to the disastrous array of problems mentioned above and to the people looking for a job or taking their children to school.

Expecting no immediate change, however, does not mean turning one’s back to this opportunity. Thinking hard about the meaning of the vote and reserving the harshest scrutiny not for those who you disagree with, but for those you support, is critical. Blind party loyalty, regionalism and factionalism further erode any effort to meaningful change. For it is an illusion to think that voting against a certain political party is enough to do one’s duty or expect things to be different. Voting against someone is an attempt to negate the past, but that will not necessarily secure the future. By the same token, voting for status quo foregoes opportunity for fresh ideas and people, however inexperienced or imperfect choices they may look from the standpoint of someone wanting the status quo to continue.