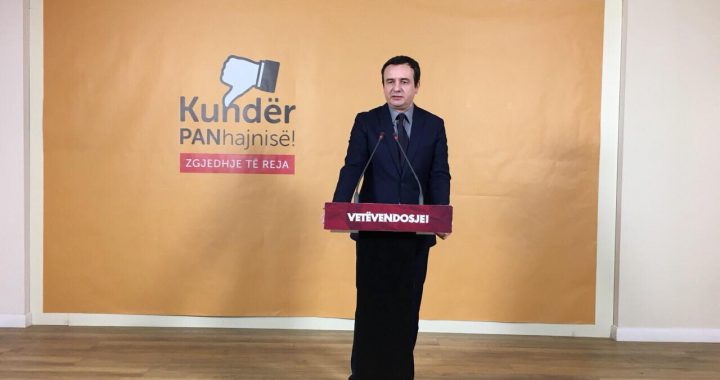 Vetevendosje calls for new wave of protests against the government

Calling for a motion of no confidence and early elections, Vetevendosje leader Albin Kurti announced a series of demonstrations across Kosovo protesting the ruling coalition’s leadership.

The leader of Vetevendosje, Albin Kurti, launched a series of protests at a press conference on Thursday, announcing that he is preparing for a motion of no confidence against Prime Minister Ramush Haradinaj’s government.

At the press conference, Kurti said that corruption, unemployment and migration has seen an increase, whereas both educational and economic development are in decline, attributing this to Haradinaj’s leadership.

Vetevendosje’s protest slogan was targeted towards the ruling party coalition, PAN, consisting of the Democractic Party of Kosovo, PDK, the Alliance for the Future of Kosovo, AAK, the New Alliance for Kosovo, AKR, and Nisma.

The slogan, “Kunder PANHajnise,” meaning “Against PAN’s Thievery,” Vetevendosje aims to incite early parliamentary elections by drumming up support for a vote of no confidence, the subtitle of the slogan reading “early elections.”

Kosovo’s preceding government, a coalition between LDK and PDK, led by current LDK head Isa Mustafa, was dissolved following a successful motion of no confidence brought by a number of opposition parties.

“From tomorrow [April 5], we will start meetings with citizens that are against PANHajnise and calling for early elections,” said Kurti.

“With these gatherings in municipalities all over the country, we will organize a civil protest and a motion of no confidence at the Kosovo Assembly, which brings down this government and enables democratic early elections and necessary political, economic and social changes,” he continued.

In June 2017, Vetevendosje narrowly missed out on winning the parliamentary elections, gaining 32 seats in the Kosovo Assembly out of a possible 120.

In March 2018, 12 members of parliament for Vetevendosje left the party to join the Social Democratic Party, PSD, citing dissatisfaction with Kurti’s leadership.

During the press conference, Kurti added that the imposition of the 100 per cent tariff increase against Serbian goods coming into Kosovo should not be withdrawn. Despite Vetevendosje’s support for this policy, Kurti stated that the tariff should not be used to justify the continued “bad governance” of Haradinaj’s administration.

“He promised [upon taking office] that within 90 days we will have visa liberalization. He couldn’t keep his word because he has been lying about it since the beginning,” Kurti said.

Following the announcement of the protests, Bilall Sherifi, MP for Nisma, denounced Kurti’s decision as “hypocrisy.”

“It is enough for you to be in power for Albin Kurti to announce that you are a ‘thief,’ a ‘criminal’ and a ‘traitor,’” said Sherifi.

From 14:00 tomorrow, Vetevendosje will launch this series of protests at Adem Jashari Square in Vushtrri, followed by Podujevo and Mitrovica on Saturday.