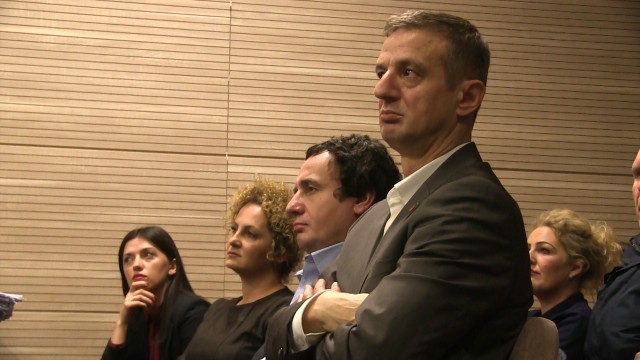 The four MPs who threw teargas in the Assembly chamber were found guilty and were sentenced with probation orders.

The Basic Court of Prishtina issued a verdict today for the case involving four Vetevendosje MPs who set off tear gas in the Assembly chamber in 2016. Albin Kurti, Donika Kadaj-Bujupi, Faton Topalli and Albulena Haxhiu were found guilty by the court after a case that ran for almost two years.

The convicted boycotted the court session, claiming that the trial was ‘political.’

The four Vetevendosje MPs were convicted for setting off tear gas in the Assembly chamber in 2016, when the opposition parties Vetevendosje and the Alliance for the Future of Kosovo, AAK, opposed the ratification of two agreements on the border demarcation with Montenegro and the agreement on the Association of Serb-majority municipalities. In addition to using whistles, water, and eggs, the MPs used tear gas to filibuster the sessions and postpone a vote on the the two controversial agreements.

After several heated court sessions, during which the defendants argued defiantly with the State Prosecutor and the judges, the judicial panel of the Basic Court of Prishtina issued a guilty verdict today.

The four MPs were found guilty for using a weapon or dangerous device and for obstructing an official person from fulfilling their duty. Kurti and Kadaj-Bujupi were sentenced to 1.5 years jail time, while Haxhiu was sentenced to 1 year and three months, and Topalli to one year and two months. All of the sentences are conditional, meaning that they will not be served in jail but that  the convicted will have a two year probation period.

Throughout the trial process, the Vetevendosje MPs maintained that their actions were in defense of Kosovo’s ‘sovereignty and territorial integrity,’ some even claiming that they were proud of their actions, and that inaction would have been worse.

Other Kosovo MPs were witnesses in the case, including the Democratic Party of Kosovo, PDK, MPs Flora Brovina, Blerta Deliu-Kodra, Xhavit Haliti and Bekim Haxhiu. The Speaker of the Assembly and PDK leader Kadri Veseli was also invited by the State Prosecutor to take the stand, but quizzically, the Prosecutor Valdet Gashi revoked the invitation.