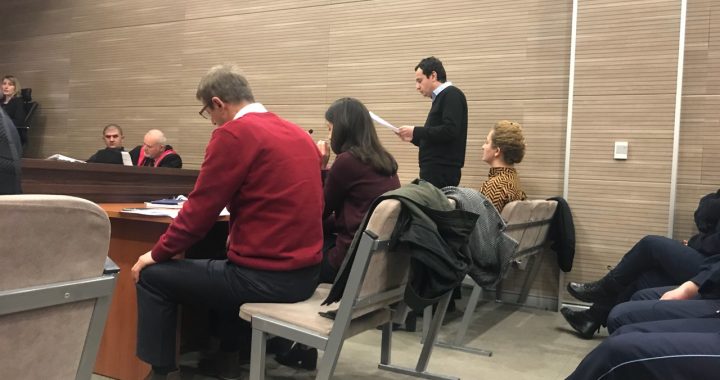 Albin Kurti and Donika Kadaj Bujupi were released from detention today, with the final verdict for the ‘tear gas case’ expected on January 3.

After closing arguments were presented by the State Prosecutor and the defense in the case against four Vetevendosje MPs accused of setting off tear gas in the Assembly last year, the two remaining defendants who were being held in detention were released.

After failing to appear in court multiple times, Kurti, Kadaj-Bujupi, and Haxhiu were arrested last month. Haxhiu was released a few days after but the judge decided to hold Kurti and Kadaj-Bujupi in detention. Only two days ago, presiding judge Beqir Kalludra extended the detention for the two MPs for another month. Today, the judicial panel decided to release the two MPs, finding that “all legal reasons” for detaining the two defendants had ceased.

During the concluding arguments, the State Prosecutor demanded that the defendants were found guilty as video footage clearly showed that they had set off tear gas in the Assembly chamber.

The defendants, who do not deny setting off tear gas in protest of the demarcation deal and the agreement on the Association of Serb-majority Municipalities, maintained that their actions fell within their duties as MPs and such were shielded by the deputy immunity.

Addressing the court, Albin Kurti said that his actions did not constitute a criminal act.

“We were right to act that way. We would have done wrong if we had done nothing. The acts that we’re accused of are not criminal, because our actions were taken within our purview as members of parliament,” Kurti said. The indicted also claimed that the presiding judge, Beqir Kalludra, was a “fascist sympathizer” because he had posted Hitler quotes on his Facebook profile.

The other defendant, MP Albulena Haxhiu, called the entire process “a  great injustice.”

“Two years of persecution in the pretense of justice, which in fact has been a great injustice to us who defended the Republic of Kosovo,” said Haxhiu. “We did not have criminal intent but political intent,” she continued, adding that the MPs had immunity when it comes to activities that relate to their office.

The final verdict from the judicial panel is expected on January 3.