Law students at the University of Prishtina prepare for the prestigious competition, the Jessup, with high hopes of winning the coveted international prize against all odds.

Every year, the stakes are high as a group of law students from the University of Prishtina give it everything they’ve got for the chance to stand before a bench of International Court of Justice members in Washington, D.C., something most qualified lawyers can only dream of achieving. However, the road to making this dream a reality is never a smooth one.

Faced with no funding or guidance from their university, and most importantly, no Wi-Fi in the library for meetings, the students themselves are taking the wheel. It is the personal determination and dedication of this small and passionate team of law students that will lead this team to their destination: representing Kosovo at the Jessup International Law Moot Court Competition.

The Jessup, as it is most well-known, is the most famous legal advocacy competition in the world since it was founded in 1958.

Hundreds of law schools from over 95 countries arrive in the United States every April to compete and win a court case between two fictional countries before the International Court of Justice, known as the ‘World Court’ –  the primary judicial organ of the United Nations.

Kosovo holds a special place in the Court’s legacy, as well as the Jessup itself. It was the ICJ that famously delivered its landmark 2010 Advisory Opinion concluding that Kosovo’s unilateral declaration of independence was not a violation of international law.

“Kosovo is famous at the Jessup!” said Elmedina Bajgora, a final year law student at the University of Prishtina and a previous competitor of the Jessup. “People were genuinely thrilled to meet someone from Kosovo, we could spread its message and tell people about the country, its culture and history.”

However, the team representing Kosovo faces some significant challenges.

Students at the University of Prishtina battle the scaling down of academic programmes, an estimated 50 to 1 ratio of students to professors, poor conditions in the libraries, and the lack of academic texts available in the Albanian language, as well as widespread problems of plagiarism and professional credibility throughout the academic staff.

Extracurricular activities throughout the University have to battle for the support they need to continue. Dafina Bucaj, an assistant professor of public international law at the University of Prishtina, explained, “Staff at the university are stretched thin between research, teaching and helping the students whenever we have free time. It’s not only the Jessup Competition, similar academic extracurricular programmes have to contend with each other for the money and support to stay afloat.”

In 2016, the Kosovo Team was denied the opportunity to compete in the competition in Washington D.C. Despite putting in eight months of hard work, they were not able to raise enough money to send the team to the United States.

“I am confident that we will make it to the competition this year. 2018 is going to be the biggest Jessup Competition yet, with over 100 countries signing up to participate,” said Mujaj.

Kosovo has been a competitor in the Jessup since 2004. Even before Kosovo declared independence, the competition, ran by the International Law Students Association, made an exception for the tenuous situation the country was in and allowed Kosovo to compete, without the requirement of representing a state.

“The level of consciousness has been raised in Kosovo, lately,” said Qerimi. “If you remember just after the war, people would go to any university to get any degree. For my generation, we are strong students who get good grades, and we are here because we want to study law.”

But learning about the law isn’t the only thing that Jessup participants are excited about.

“Arriving in Washington, going to the competition, it meant everything to me. That one trip motivated me for life. Students in Prishtina aren’t used to going to places like this and getting involved in the international law community, it was amazing getting to represent my country, meet students from different cultures, see how hard they worked and how passionate they were. I have friends from all over the world now,” said Bajgora.

Students that participate in Jessup are known to get snapped up by some of the best law firms around the globe, who use Jessup to seek out the world’s best graduate law students.

“Many employers, in academia and in the legal profession, are ex-competitors themselves, and participation is an immediate signal that the candidate has graduated with a host of additional skills,” said David Scott, the head coach of the team from the University of Manchester.

And the Jessup journey doesn’t end in Washington D.C.

“Participating also opens up the benefits of the wider Jessup community. I myself have gone on to judge national and European rounds in Brazil, Ukraine, and Budapest, as well as remaining involved as a coach, and will do for many years to come, no doubt,” he said.

The team spends eight months preparing for the competition, first researching and writing their arguments, then learning how to plead as a lawyer in front of a bench of judges.

Using their legal knowhow, imagination and creativity, the team must convince the judges and win the competition, by proving that their country did (or did not) commit illegal acts such as unlawful killings, warfare, espionage, corruption or human rights violations. 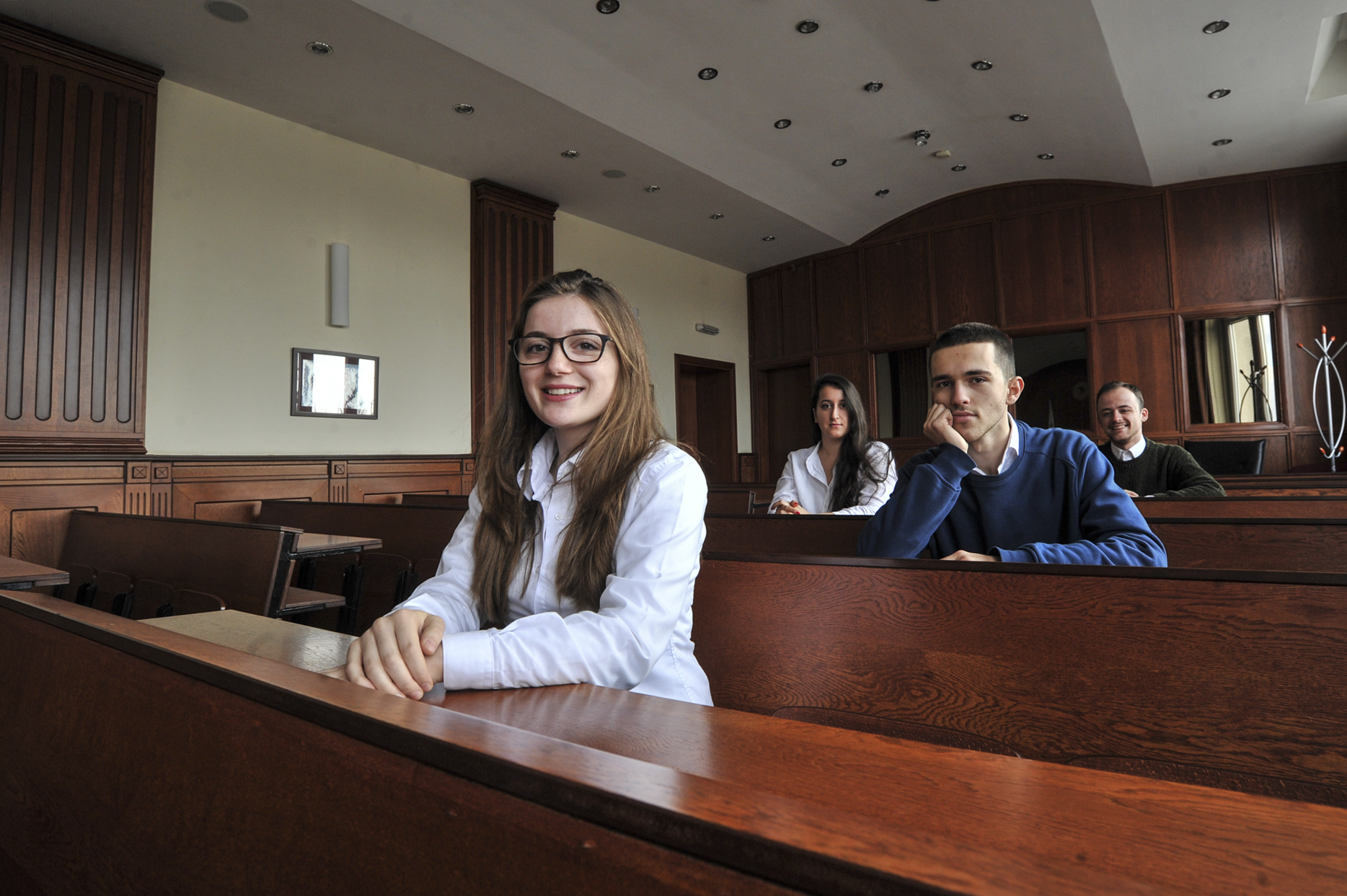 “Jessup is like having a job,” said Albana Krasniqi, a former Jessup competitor from the University of Prishtina. “It was all we could think about, our number one priority.”

“You develop your confidence arguing in front of strangers, how to be assertive and passionate about the country you are defending. If you do it right, you really reap the rewards.”

Inspired by the prospect of making it to Washington D.C., for the next five months you’ll find this year’s team tucked away in a corner of the law faculty, crowded around one desk in a tiny office. With the help of a small community of avid Jessup alumni living in Prishtina, they have some guidance before they face the judges.

However, the odds are still stacked against them.

“The university doesn’t help us find the money,” said Bajgora,. “It costs more than ten thousand euros to get all of us to the competition. We get no financial support, last year we didn’t even get a classroom to study in, there was no Wi-Fi, we had to research at home or meet in a noisy café.”

“The lack of support from the university means that students aren’t encouraged to apply, or they don’t know anything about it at all,” Krasniqi agreed.

Roxanna Nazari, lawyer and administrator for the European Rounds of the Jessup Competition, explains the problems that teams from universities that lack the resources to give adequate backing for these competitions face.

“Teams like Kosovo are so enthusiastic, but they have to start from scratch every single year and scramble for the resources and funding to participate in the competition,” Nazari said.

“Jessup tries to make things easier by waiving registration fees and doing some fundraising, but resources are always limited, and we can’t help every team that needs assistance.”

“Kosovo is an isolated country, and for students like us, a chance to be part of the Jessup community is more useful than to others who have these opportunities handed to them,” said Bajgora. “Now my time in Jessup is over I’m planning to go abroad and continue to study international law and use these connections we’ve made and experience that we’ve gained.”

Jessup creates opportunities for students like Bajgora and Krasniqi, but also for the future lawyers of Kosovo.

“Speaking professionally, we need more students who learn these skills and get hands on experience,” said Krasniqi.

This additional  training that Jessup competitors benefit from fill a gap in the formal education of the students.

“The University is failing on a practical standpoint to prepare its students for life as lawyers. We’re never taught to think outside the box. Truthfully, we are taught not to disagree with what is in our textbooks, or what our lecturer tells us.”

Bucaj argues that competitions like Jessup help to address these imbalances.

“The university needs to spend more time teaching students how to think for themselves, how to engage critically with the law we see before us. This is why these competitions are the best thing students can ever do,” she said.

“They shape young students into talented young professionals who learn skills, not information. They can take what they’ve learned at the Jessup and apply it to their life and work in Kosovo.”

by Naim Krasniqi
Next: News