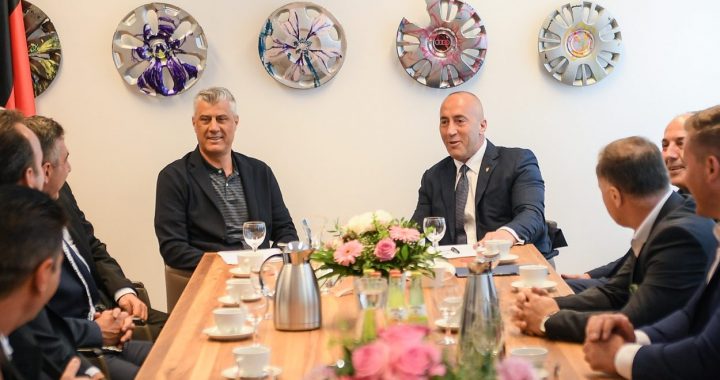 Kosovo Serbia dialogue at the center of Berlin Summit

The jump-start of the dialogue between Kosovo and Serbia among the key issues at the Berlin Summit co-hosted by Germany and France.

Thaci’s position is against that of Prime Minister Haradinaj, who in November 2018 introduced a 100 percent customs tariff on all goods produced in Serbia as a retaliatory measure, after Serbia’s campaign to prevent Kosovo from gaining membership into INTERPOL.

The Kosovo PM has reiterated that the tariff will be withdrawn only when Serbia recognizes Kosovo, while Serbian President Aleksandar Vucic has conditioned the continuation of the dialogue with the withdrawal of the tariff. At a press conference, Haradinaj declined to answer questions over whether he and Thaci were coordinated against their Serbian counterparts.

However, the two were in accordance regarding a draft document which had circulated in the Kosovo media and expressed pledges that Kosovo and Serbia are committed to the dialogue. After a meeting at the Kosovo Embassy in Berlin today, both Thaci and Haradinaj denied being aware of any such document.

Last summer, Thaci, along with Vucic, introduced the idea of “border correction” as a potential tool in the dialogue. The exact nature of this “border correction” has never been fully revealed, but Thaci suggested that the Presevo Valley, inhabited predominantly by ethnic Albanians, would join Kosovo. For many, that suggested that Kosovo’s four northern municipalities inhabited predominantly by Serbs would become part of Serbia.

When Thaci was asked at a press conference prior to the Summit whether the agreement with Serbia would be acceptable if it included “border correction,” he avoided answering directly, but stated that: “There is no dialogue and negotiation without the involvement of the United States.”

While the idea of border changes has found no support from Germany, American foreign policy has been more open to the idea. “The U.S. policy is that if the two parties can work it out between themselves and reach agreement, we don’t exclude territorial adjustments,” U.S. President Donald Trump’s Security Advisor John Bolton said in August 2018.

Serbian President Aleksandar Vucic meanwhile, today told journalists that he is not clear which border they would be discussing. “Those recognized by Germany or Greece?” he asked rhetorically. Greece remain among the 5 EU member states that have not recognized Kosovo’s independence.

Milan Nic, a German foreign policy think-tank expert told BIRN that the resumption of the stalled dialogue between Kosovo and Serbia is the minimum goal of the summit. “The minimum goal is to pick up the pieces of that discussion and return the Serbia-Kosovo discussion back into process,” he said. “The second goal is actually to jumpstart the dialogue, which has reached a dead end under [EU foreign policy chief Federica] Mogherini.”