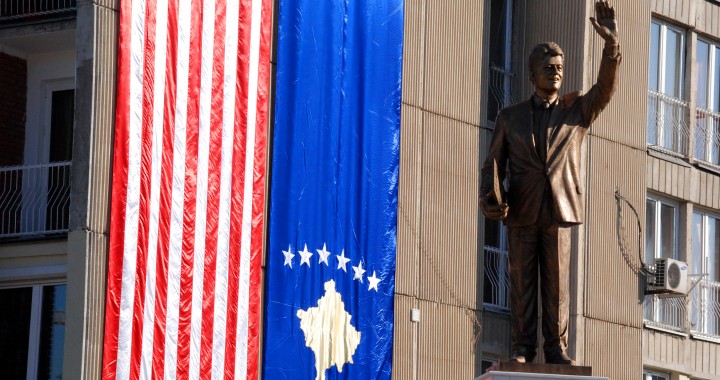 The United States, in pushing for a deal between Serbia and Kosovo, is losing patience with one of its closest Balkan allies.

What began as a retaliatory strike in the form of a 100 per cent tariff on imported goods from Serbia has snowballed into a genuine threat to Kosovo’s ties with its closest big-power ally.

In a joint op-ed on Friday by the US envoys to Serbia and Kosovo and a letter on Tuesday from three senior Trump administration officials, Washington has laid bare the growing cracks in its relationship with the Kosovo government of Prime Minister Ramush Haradinaj.

Analysts say the United States is angered by what it sees as obstacles thrown up by Haradinaj to the search for a final deal this year to settle relations with between Kosovo and its former master Serbia.

The tariffs imposed by Haradinaj in November last year, in retaliation for Serbian lobbying against Kosovo’s membership of Interpol, threaten to significantly undermine the young country’s position in negotiations with Belgrade, some warn.

The tensions may reflect the long-held opposition of President Donald Trump’s national security adviser, John Bolton, to Kosovo’s independence, and the administration’s apparent readiness to consider partition – long favoured by Serbia – as a possible solution.

“I believe the consequences of this letter will be to further weaken the negotiating position of Kosovo for whatever the final agreement is going to be,” political analyst Haki Abazi told BIRN.

Daniel Serwer, Professor of Practice of Conflict Management at the John Hopkins School of Advanced International Studies, said: “Washington wants an agreement between Belgrade and Prishtina and sees the tariffs as an obstacle.”

The letter was sent on Tuesday to Haradinaj, President Hashim Thaci and Assembly speaker Kadri Veseli.

“These actions undermine the United States’ ability to continue to collaborate with you on a wide range of shared objectives,” the letter reads.

The officials confirmed the cancelation of a planned visit by Iowa National Guard General Timothy Orr and said Washington would be “looking carefully at other aspects of our cooperation and reviewing if they should also be curtailed.”

That may include the cancelation of a donation of US military Humvees worth 12 million euros, the news television channel Kohavision reported this week.

Haradinaj, responding to the report after a government meeting, said “there are no such sanctions that could force us to lift the tariff.”

Such language, at least publicly, has been unprecedented in US-Kosovo relations since Washington led the 1999 NATO air strikes against former Yugoslavia to halt the killing and expulsion of ethnic Albanian civilians in Kosovo during a brutal counter-insurgency war by forces under late Serbian strongman Slobodan Milosevic.

Kosovo’s leaders “have brought relations with the United States to their lowest level since the end of the war in Kosovo,” former US diplomat and Balkans expert James Hooper told Radio Free Europe.

He said Kosovo had “thrown away” its strong position in the negotiations and Belgrade was now seen as the “more rational” actor.

Kosovo declared independence in 2008 with the backing of the US and other major Western powers and has long been heavily dependent on Washington’s diplomatic clout to further its international integration.

Serbia, however, says Washington’s policy towards the Balkans has shifted under Trump and Bolton, who has in the past criticized the West’s backing for Kosovo’s independence.

Bolton’s return to office has encouraged Serbian leaders, who have long held out for Kosovo’s partition between the ethnic Albanian majority and a small pocket of Serb-dominated territory in the north.

Thaci has advocated for ‘border corrections,’ but his fellow former guerrilla commander Haradinaj has said partition would mean war.

Tuesday’s letter stressed the US remained committed to seeking a solution to ties between Serbia and Kosovo based on “mutual recognition.” But the tone suggested patience is running thin.

“The temporary annulment of the tariff is the only vital step that will push forward the process of the dialogue with Serbia,” US Ambassador to Kosovo Philip Kosnett told Kohavision in late January.

Haradinaj met Kosnett on Tuesday, writing on Facebook afterwards that Kosovo “remains determined to preserve the friendship” with the US. The close relationship between the two is “inviolable,” Haradinaj wrote, “regardless of eventual differences of opinion.”

He took a stronger line in remarks to reporters, however, saying “pressure is not the appropriate language for us. It isn’t effective.”

Haradinaj did not travel to the US for the traditional National Prayer Breakfast earlier this month, despite being invited.

His government hiked the import tariff on Serbia and Bosnia, which like Serbia also does not recognize Kosovo as independent, in November, ignoring complaints from the US and European Union that the move violated the terms of the regional CEFTA free-trade zone and would undermine EU-led negotiations with Serbia.

Kosovo argued it was retaliating against Serbia’s continued lobbying in opposition of its membership in international bodies such as Interpol and the United Nations.

Robert Bosch, a former Dutch ambassador to Kosovo, said Serbia has “continued relentlessly to work against Kosovo in both the international sphere as in Kosovo itself through their fifth column.”

The US turn against Kosovo has shocked some in the country, so used to expecting Washington’s support against Serbia.

Serbia has done itself no favors in its relationship with Washington by its failure to hold accountable those responsible for the murder of three US citizens – brothers and former members of the Kosovo Albanian guerrilla army – after the end of the Kosovo war, the analyst Abazi noted.

And yet there had been no such strong reaction from the US to Serbia’s “lobbying [countries] for withdrawal of their recognition of Kosovo’s independence while the [EU-mediated] dialogue was ongoing,” he told BIRN.

Trump has intervened personally, writing to the leaders of both Serbia and Kosovo in December and urging them to “seize this moment” to reach a deal.

In a joint op-ed published on Friday on the websites of the US embassies in Serbia and Kosovo, Kosnett and Washington’s Belgrade envoy, Kyle Scott, said it was time for Kosovo to suspend the tariffs and for both sides to end their “provocations”.

“If you do so, we are optimistic you can reach a historic normalization agreement in 2019,” they wrote.

They said a historic deal adopted this year between Greece and Macedonia to resolve almost three decades of dispute over Macedonia’s name “should be an inspiration to everyone in the region.”

Jelena Milic, the director of the Belgrade-based think tank Center for Euro-Atlantic Studies, told Voice of America: “Prishtina and Belgrade should take the same model agreement as Macedonia and Greece, so that both parties lose something, in order to gain something.”

Serbian Foreign Minister Ivica Dacic, who has long argued in favour of Kosovo’s partition, said on Monday that the time was right but that the situation might shift again after the next US presidential election in 2020.

“The question is whether the return of Biden or someone from that circle would be good for us,” Dacic told Pink TV, referring to former President Barack Obama’s vice president, Joe Biden, whose is rumored to be considering a presidential run in 2020.

Kosovo “did not expect such strong pressure from the international community to lift the tariffs,” he said. “I don’t think the US will impose sanctions on Prishtina because of it, but they have announced restrictions in military-security cooperation.”

Abazi said the US would be wise not to take Serbia’s “diplomatic assurances” at face value.

Serbia, he said, has broken promises through successive international efforts to bridge the divide between Serbia and Kosovo.

“Serbia has used the strategy of buying time to undermine the statehood of Kosovo,” he said.