The protest movement in Albania has not achieved all its goals – but those taking part say it has revived their belief in their ability to bring about real change.

“You are millionaires, with villas and cars. I won’t pay for you anymore – and nor will my family!”

The chant that has became a symbol of the recent student protests in Albania echoed in around the capital Tirana last Sunday, just a few hundred yards from the main Skenderbeg Square.

The activists of Levizja per Universitetin, Movement for University, seemed to be testing their voices for the first protest of 2019, due to be held the next day. 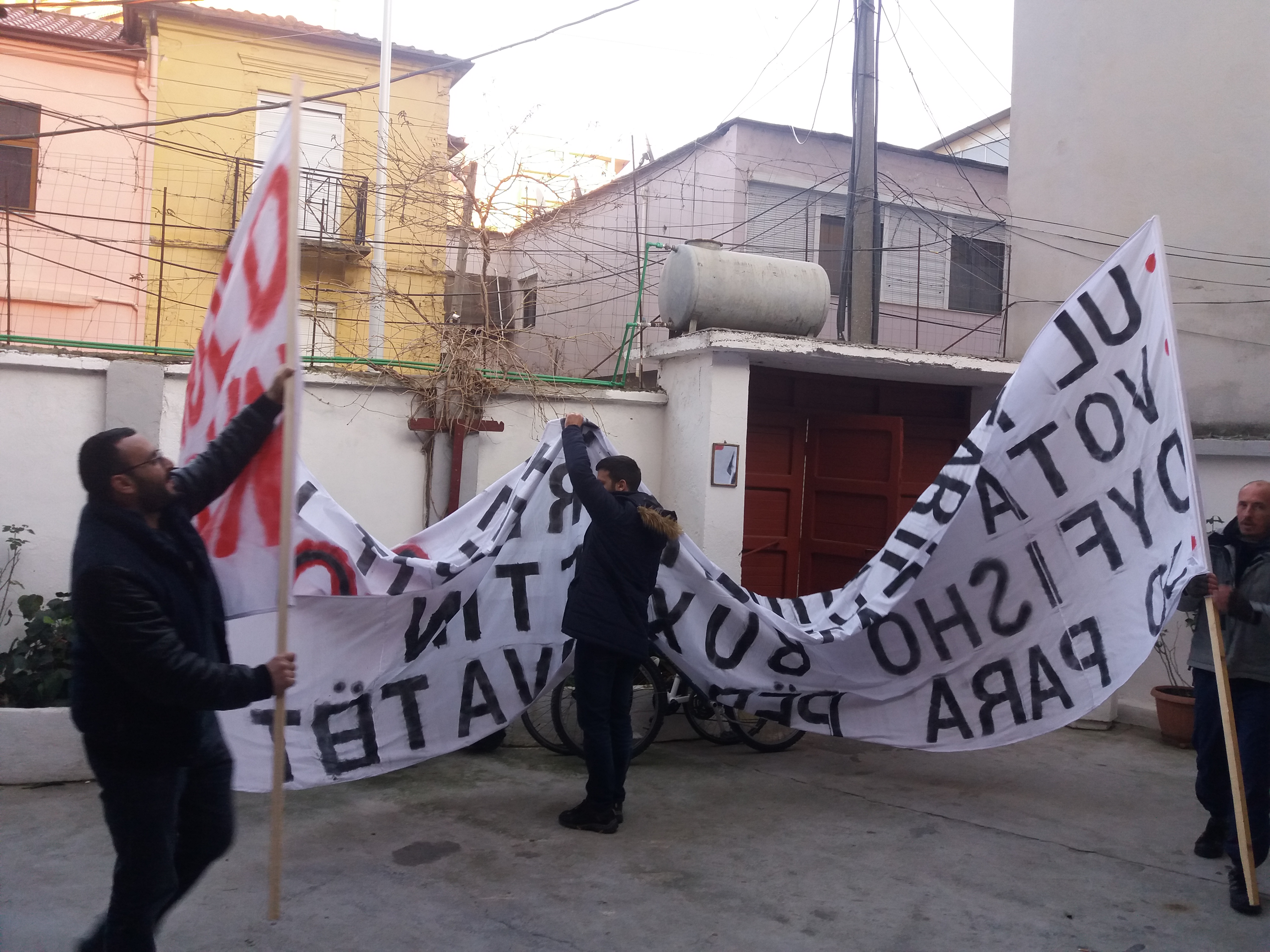 Activists prepare banners in the base at Social Center “Logu” in Tirana. | Photo: Eraldin Fazliu.

Inside the “Logu” Social Center, the atmosphere was buzzing and the students seemed in a good mood, while the two-floor house was littered with banners and other materials for the protests.

Bislim Lakna is easily identified as coming from Kosovo thanks to his Gheg dialect.

One of the main activists at Levizja per Universitetin, he has been protesting for more than a month, demanding better conditions in Albanian higher education.

Born in Gjilan, he is an architecture student in Tirana. But recently he has dedicated all his time and energy to the cause of scrapping the Law on Higher Education  in Albania. 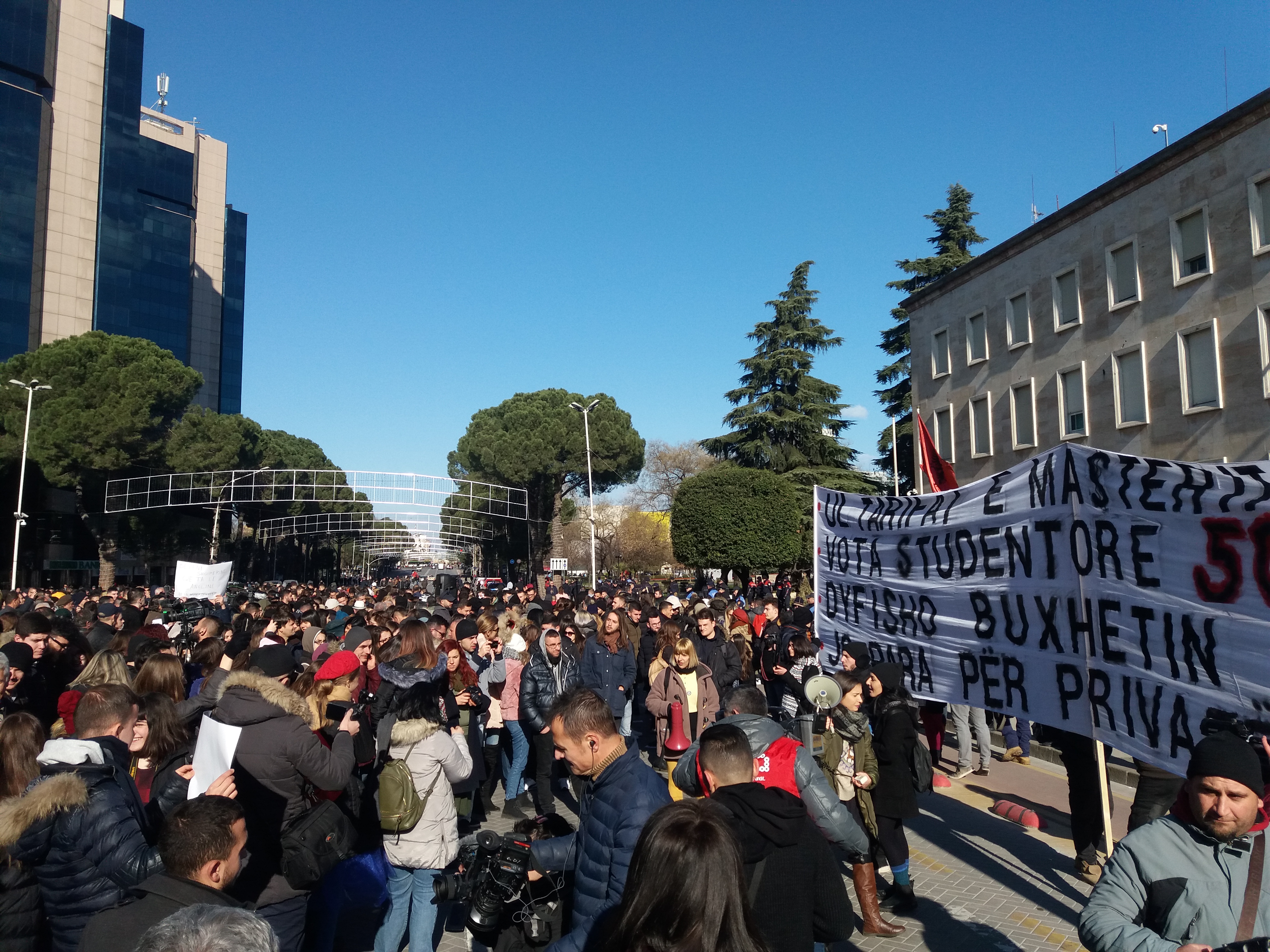 More than a month after the protests first began in Tirana, students continue to fill the streets in protest. Photo: Eraldin Fazliu.

Several student organizations are gathering regularly in Tirana and across the country to protest against social injustice in general and the dire condition of students in particular. This week, they commenced a mass boycott of lessons at their faculties and putting up banners across the city.

Among other demands, they want cuts in student fees, a rise in the state budget for public universities and less state support for private universities.

They have been  taking to the streets since last December. 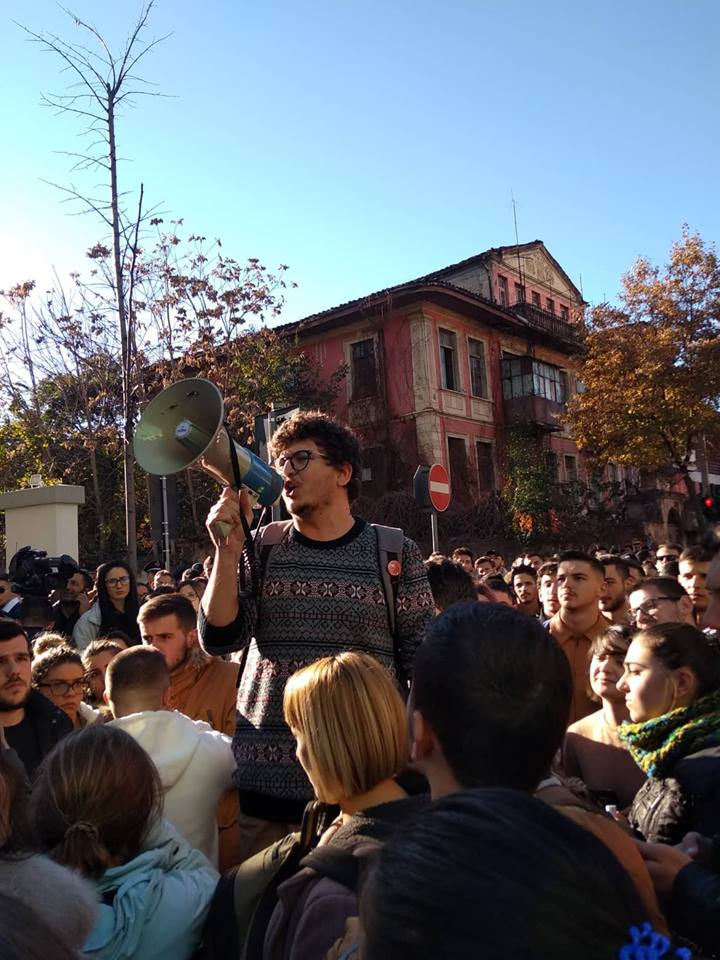 “Even if there are no more protests, the effect of the December protests will be visible from now on,” Lakna told Prishtina Insight with a sense of pride.

For Lakna, Albanian Socialist Party leader and Prime Minister Edi Rama’s decision to reshuffle the cabinet at the end of December, when the education minister Lindita Nikolla was dismissed along with several other ministers, is not enough.

Lakna and his peers are determined to see the Law on Higher Education scrapped as well. “This is the biggest political battle that Rama ever faced,” Lakna argued.

The Prime Minister at first refused to meet any of the demands of the students, calling the protesters “failures.”

However, a month later, Rama was sounding less arrogant.

Fearful that the protest could lead to unrest over the whole country, he changed tack and called for dialogue.

The decision to raise the fees for retaking classes was scrapped. Rama also announced that he would cut the fees for Bachelor studies in half.

Students remain dissatisfied, however, and abolishing the Law on Higher Education that came into force in June 2015 is now their main goal.

It is not only students that distrust Rama’s intentions and his recent response.

Ervin Goci, a lecturer at the Faculty of Journalism and Communication, was also protesting on Monday in front of the Prime Minister’s Office. 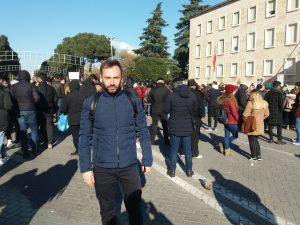 Ervin Goci, lecturer at the faculty of Journalism and Communication at the University of Tirana. | Photo: Eraldin Fazliu.

He said the decision to cut by half the fees for Bachelor studies remained “absolutely unclear.”

“How do you cut student fees by half without increasing the budget for higher education?” he asked rhetorically.

“Students contribute more than the state,” he added, accusing the government of abandoning higher education.

Goci has supported the students’ demands, and has been vocal against the Higher Education Law ever since it was adopted.

He is among the 50 staff members at the Faculty of Social Sciences that signed a solidarity declaration in support of students.

For him, being a lecturer is a social responsibility that transcends the duties of just being an academic.

“From lecturers, we inevitably become activists and people who fight for other causes,” he said.

The student protests have drawn support not only from active members of academia. 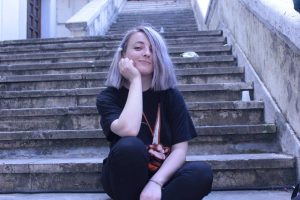 Anita Lushi continues to protest despite the fact that she is not an active student, and remains jobless. | Photo: Vincent Selamaj.

Anita Lushi is no longer a student, but strongly supports the abrogation of the Higher Education Law, which she has done alongside members of Levizja Per Universitetin several times since 2015, when the law was passed.

Now jobless, the protests gave her the spirit to take to the streets. “I don’t exaggerate if I say that it is one of the most beautiful things that has happened to me,” she told Prishtina Insight.

Lushi’s sense of elation is not isolated. Albania’s transition to democracy has not seen many such joyful non-partisan protests.

Erdi Berxulli, who is finishing his masters in journalism in Tirana while also working as a journalist in a news portal, insists that the non-violent protests have already achieved amazing results.

“The protest was the most peaceful ever organized in Albania. With no violence or vandalism, but just banners, words and sometimes even silence… we brought down half of the government,” Berxulli exults, referring to the December reshuffle.

“My brother is in school now, but when he comes next year to study in Tirana, his fees will be cut in half… this is a joint achievement of all of us,” he adds. 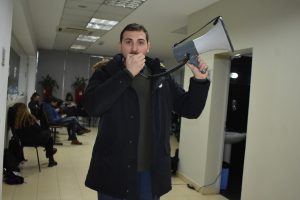 His main challenge lately was adjusting his work shifts so he can participate in the protests.

“In these protests, like never before, the students have triumphed over fear,” he told Prishtina Insight.

“No intimidation, fear or threats have enabled the state apparatus to crush our genuine dream of a better Albania,” he continued.

Viosana Kokla, who studies architecture at the University of Tirana, says the protests “brought tears to my eyes.”

“When I saw that everyone had stood up, I had always dreamt of this,” Kokla told Prishtina Insight.

Kokla is not part of the student organizations but became well known for her brave exchange with Rama in a debate at the Polytechnic University on the student crisis.

Eventually, Kokla quit the discussion, accusing the Prime Minister of keeping up a monologue.

“Rama should fulfill our demands and not continue with his propaganda,” she argued. “We don’t want anymore propaganda, we want our demands fully fulfilled.”

The current law on education, with a few amendments, was drafted back in 2008 by the government of the now opposition Democratic Party, PD, and the Socialist Movement for Integration, LSI.

However, it was only passed years later in June 2015, under the coalition government of Rama’s Socialists and the LSI.

For Goci, the student protests illustrate the wider problems of Albanian society that have accumulated since the country began making the transition to democracy from the ruthless communist regime of Enver Hoxha.

“We are dealing with a big social drama that has erupted, and for me, the roots can be found in corruption and in the arbitrary decision-making that in a totalitarian style allocates the money to the private sector and the oligarchs,” Goci said.

Lakna echoes those claims, deeming it hypocritical that a self-styled Socialist Party should push completely neo-liberal policies in education.

“Through the reform on higher education, Rama had shown his neo-liberal ideology and his partnership with the big companies and oligarchs,” he argued.

One reason why students oppose the law is the advantages it gives private sector colleges in Albania.

This is because both private institutions and the students studying at them can benefit from public spending.

While the state spends money on the private sector, conditions at public universities meanwhile remain poor.

The grim state of the dormitories and the lack of libraries and spaces to study and socialize have been a permanent problem.

“We have to stay in cafes because we do not even have Wi-Fi connection at school,” Kokla said.

Joana Meraja, a psychology student, agrees, explaining that the lack of student cards means students have no kind of advantage in Albanian society.

“Besides of the high fees, students have no social life. We have no discounts to go to the theater or the cinema. There is not open space, besides cafes, to meet and discuss with your colleagues,” Meraja said.

While the state allocates money for private institutions, the public sector tuition fees are among the highest in the region.

Master studies in Albania cost between 1,500 to 2,000 euros. In Kosovo, the tuition fee for master studies at the University of Prishtina is 600 euros.

One of the banners on Monday’s protest read simply: “Cut the fees for master studies!”

Kokla said his sister was not able to continue her postgraduate degree because of the steep price.

“My sister could not attend her master studies due to the high tariffs,” she claimed.

The high fees and dire conditions in the education system in Albania have brought women to the forefront of the revolt. According to Meraja, the protest for women is a “double fight.”

“We have a patriarchal society in which women are highly oppressed already, and when you add the high cost for studies, women become the biggest victims of this law,” said Meraja. 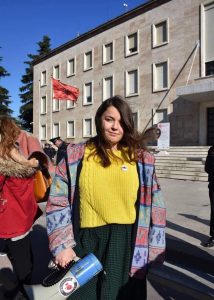 She comes from Mamurras, a small town in the northwest Albania. “Girls from my town have only three options: to work for ridiculous salaries, stay at home as a servant or wait for their father to find a man they can get married to,” she said.

The plight of women in Albania inspired Anita Lushi to participate in the protests.

“Higher fees for studies affect girls most, because if the fees rise, in a family of two kids, with a boy and a girl, the boy will always will get the advantage,” she added.

Poverty, social injustice and the high rate of unemployment have incited many Albanians to migrate and look for a brighter future elsewhere in Europe.

“Albania has money – but it never comes to us. There is economic growth but the people never receive anything,” Ervin Goci complained.

According to a research study by the University of Sussex in England and Albanian researcher Ilir Gedeshi, the potential migration rate from Albania grew from 44 per cent in 2007 to 52 per cent in 2018.

For Goci, the overall political and economic situation must change, with the country now at a crossroads.

“If the situation does not change, the country might collapse and we will see even more people leaving the country; 300,000 already left in the last five years,” he said.

But the recent protests have revived enthusiasm to demand change, a fresh fight against social injustice and an improvement of life.

“From now on, when we go to university to speak about conditions, they can’t just say ‘No, that’s not possible’ any longer. We have provided an example that students can build a better Albania,” Lakna concluded.