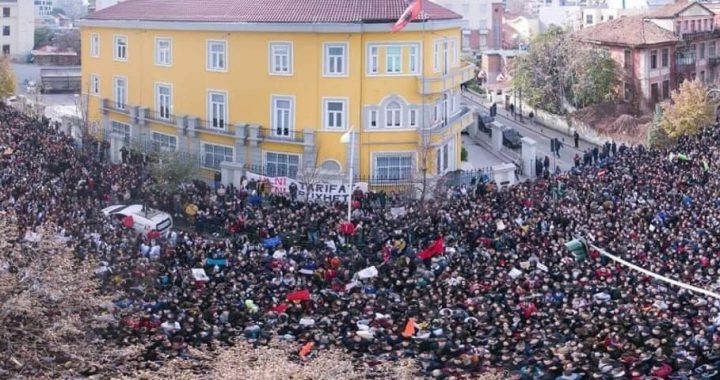 Albanian students, for the fourth consecutive day, have taken to the streets to oppose the increase of university tuition fees and demanding better conditions in education.

On Friday morning, Tirana saw thousands of students gathering in front of the Ministry of Education, Youth and Sports to protest against the proposed rise of tuition fees for students and demanding improvement of the poor conditions at universities for students in Tirana and elsewhere in Albania.

The student protesters were carrying banners reading: “Our parents are in debt from our tuition fees.”

This most recent move from the government would oblige students to repeat the mandatory fee they pay to take exams if they need to take them a second time to improve their grades. This follows the original pronouncement to hike up tuition fees taken in May this year.

Following the protests in Tirana, demonstrations spilled over into other cities of the country on Thursday, spreading to Elbasan, Durres, and Korca.

On Friday, students from Vlora have abandoned classes as a form of protest. The protests have been described as the biggest in recent years, having in mind that they are completely non-party affiliated.

“The government decision to raise fees was requested by the universities,” Rama tweeted, before adding that the Ministry of Education has asked the Universities “to revise” the decision on the increase, saying that it is for the universities to make the final call on the new fee.

Rama dismissed the claims made by protesters, labelling the students as “grade failers” and stating that the media was spreading disinformation.

Yesterday, the Minister of Education Lindita Nikolla withdrew the decision which obliged students to pay for the new fee for the additional exams, which was originally issued in July.

However, the demand of the protesters goes beyond the government decision, requesting postgraduate university fees to be cut in half due to economic difficulties they face.

On Thursday, students of the medical faculty, among others, spread banners “The failers that are demanded by Germany,” referring to the high number of well educated young doctors in recent years moving to Germany.

The students also called for an improvement to university conditions and the economic difficulties they face.

“We are not poor, but we are being stolen from,” read another banner.