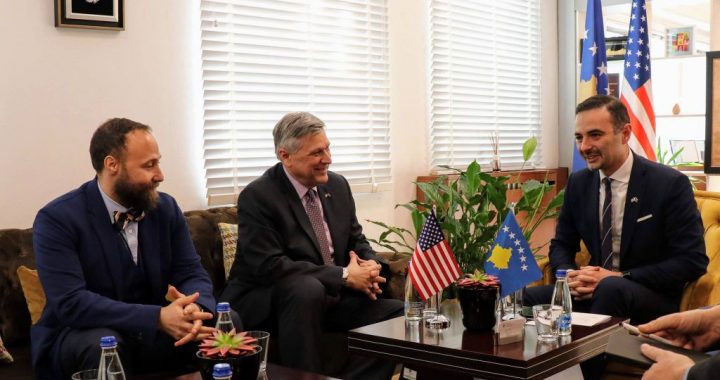 Former Minister of Economic Development Fadil Ismajli was selected as the executive chief of Kosovo public energy enterprise NKEC, following objections of a USAID monitor toward the process.

The board of Kosovo’s New Energy Enterprise, NKEC, selected former Minister for Economic Development, Fadil Ismajli, as the new executive chief of the publicly owned energy corporation, despite British Embassy monitoring bodies hailing only his rival for the position, Gjelosh Vataj, as suitable to take on the position.

This decision was made following the interjections of William Trigg, the USAID monitoring representative in the recruitment process for NKEC Executive Chief, which was crucial in determining the outcome of the competition.

The initial assessment was conducted both by a local commission, comprised of the NKEC board, and two members of the BDO LLC company, who were engaged by the British Embassy to provide technical assistance in recruiting for senior positions of the government and the Assembly of Kosovo.

Fadil Ismajli, a former member of Kosovo New Alliance, AKR, and Gjelosh Vataj were neck-and-neck in the race for NKEC Executive Chief. Both commissions gave higher points to Vataj, while Ismajli was ranked as second. The local commission gave Fadil Ismajli 26 points, while Gjelosh Vataj received 30.2.

However, two members of the BDO company gave Vataj 28.5 points, while Fadil Ismajli only 20.

After both commissions presented their final results, Trigg, who was only acting as the monitoring representative of the process, responded that the evaluation of the Commission and the BDO representatives was inaccurate.

According to Trigg, candidate Fadil Ismajli was better prepared for the position than candidate Gjelosh Vataj.

Trigg said that, based on the answers provided in the interview, Ismajli showed significantly greater competence than Vataj, while the commissions estimated the contrary.

Going through each point separately concerning the questions of the commission and the candidates’ responses, Trigg contested Vataj’s eventual selection in place of Ismajli.

Trigg concluded that the position presented by him is a position coming “directly from the US Embassy.”

After Trigg made these comments following the two commissions’ presentations of the results, he left the meeting room. After Trigg’s intervention, the BIRN monitors present at the meeting were excluded from the room. A few minutes later, the two BDO representatives left the meeting as well, and a closed-door meeting of only the NKEC commission continued for three more hours.

During this meeting, both Shkumbin Asllani, secretary of the NKEC board, and Trigg entered the room several times.

After the meeting commenced with all persons present, the chairperson of the commission notified those present that the commission decided to cancel the recruitment process, returning the entire process back to zero.

Their reasoning, presented by chairman Ferit Idrizi, was as following: “The score between the candidates was very narrow therefore the [board] did not have the confidence to decide.”

After announcing the commission’s decision to cancel the competition, Trigg expressed his disapproval, stating that “by bringing this decision, you have shown that you are not concerned about the energy sector in Kosovo.”

However, the developments concerning the selection of the NKEC Executive Chief did not end with the cancellation of the decision as stated on February 5.

The NKEC Board was summoned the following day on February 6, while the representatives of the BDO did not attend the meeting.

Switching points in the dark

The NKEC Board allowed BIRN to monitor the Executive Chief selection process, but BIRN was not invited for the February 6 meeting, as would normally happen in the past when BIRN was previously involved in monitoring activities.

In the February 6 meeting, the NKEC Board switched the points once again, enlisting Fadil Ismajli as the highest-scored candidate.

This was confirmed by the Ministry of Economic Development, MED.

“We confirm that the board of directors has already declared the successful candidate and this process has not been annulled,” said the MED’s response.

The statement that published the successful candidates on the MED website was signed by the board members: Ferit Idrizi, Shqipe Ahmeti, Bedri Dragusha, Besnik Gecaj and Valon Berisha.

The statement listed Fadil Ismajli as the successful candidate with 29 points.

Based on these results, three additional points were awarded to Ismajli. Vataj’s points were not published, however he was awarded 30.2 in the first evaluation, meaning that in the second evaluation, his points must have been lowered.

Meanwhile, BDO published their own separate results for the evaluation process.

BDO assessed that Fadil Ismajli is not suitable to be appointed, and awarded Vataj 28.5 points.

The MED said they have received a report from BDO, in which no objection of non-compliance in terms of the Memorandum of Understanding between the Kosovo Government and the British Embassy was brought to their attention, emphasizing that the evaluation of the points is a procedural issue and an autonomous decisions of NKEC’s board.

This Memorandum allows the British Embassy to provide assistance to institutions when dealing with appointing senior management positions.

The British Embassy stated that only one candidate is eligible for meeting the criteria for the head of NKEC nomination, Gjelosh Vataj.

“The report of the implementing partner that has supported the selection process of the NKEC Executive Chief was forwarded to the Speaker of the Assembly, the Prime Minister and the MED. This report points out the sole candidate that meets the criteria, as published on the KosovoSelection website,” reads the British Embassy reply for BIRN.

“It is the obligation of the Commission [NKEC board] to explain the progress of the process, whether there has been a violation of procedures, a change of assessment, cancellation and reopening of the process, or an influence from abroad,” the Embassy said.

Still, the appointment of persons who fail to meet the criteria is in violation with the agreement they have with the government, said the Embassy.

“As foreseen by the Memorandum of Understanding signed with the Assembly and the Government, we look ahead from the Kosovo institutions to nominate only the candidates that meet the criteria, based on a transparent and exemplary recruitment process. Any deviation from this would lead to a violation of the agreement,” reads the response of the Embassy.

Explaining Trigg’s role in the recruitment procedure, the MED said the board gave permission to the USAID representative to share his views.

“During the discussion process, the Board of Directors has provided some room for USAID representative to share his views on the energy sector in general and in particular on the role of the “New Kosovo Energy Enterprise NKEC” Sh.A. in the energy sector in our country. In this regard, based on the data gathered by the partner [British Embassy] and the Board of Directors, we maintain [Trigg’s] point of view has been entirely in support of the process,” reads MED’s response.

The interview process for NKEC Executive Chief took place on February 5, while the Board’s decision recommending Fadil Ismajli as a successful candidate was published on February 6. On February 7, Minister of Economic Development, Valdrin Lluka, met US Ambassador Philip Kosnett and Trigg.

The Law on Publicly-Owned Enterprises, Article 24, paragraph 1, mandates the Board of Directors to develop a selection procedure of the Enterprise Officer based on the merits.

“When selecting the persons appointed as Publicly-Owned Enterprises, POE officials, the Board of Directors must conduct an open, transparent and competitive procedure which aims to make all appointments exclusively on merit basis,” reads the law.

MED officials said that they are monitoring Publicly-Owned Enterprises, POE, only through the Unit for Policy and Monitoring within Public Enterprises. Therefore, according to MED, this unit reported no concerns in terms of interfering in the recruitment process.