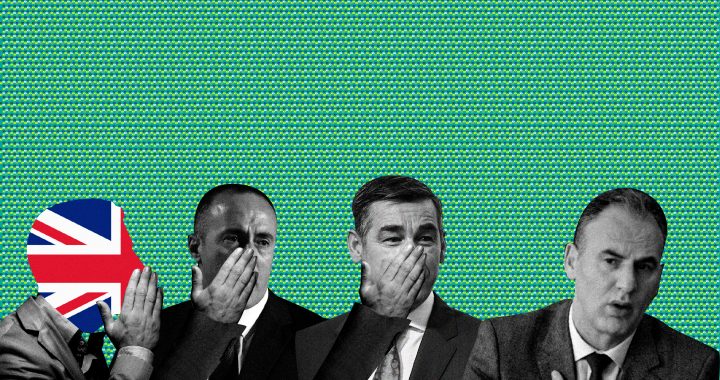 Dozens of people were appointed to high public posts without the blessing of British vetters and against Kosovo law.

Despite a memorandum of understanding between Kosovo institutions and the British embassy to monitor the recruitment process for high-ranking officials, a series of investigations by BIRN show that Kosovo authorities turned a deaf ear to the recommendations of British vetters and even made some illegal appointments.

Two years ago, the Kosovo Assembly and government signed two MoUs with the British Embassy to allow British professionals to oversee the recruitment process for an extensive list of public posts.

These MoUs were renewed once again in 2017 and are  due to be renewed for a third time this June. However the British vetters, who were supposed to ensure high-officials would be picked based on merit alone, have found themselves either excluded from the recruitment process, or their opinion unheeded.

Several boards of publicly owned enterprises, agencies, and appointments for ministerial secretaries and even correctional service heads, were appointed disregarding the MoU.

At times, individuals appointed to these posts had clear ties to the parties in power making their recruitment a violation of the Law on Public Enterprises.

Below is a list of appointments to boards and other public posts that were conducted either through bypassing British vetters, or in violation to legal restrictions to political appointments.

The selection of the board of the mining giant Trepca

Even though the Law on Trepca prohibits the appointment of people with any political affiliation to its supervisory board, once in power, Ramush Haradinaj’s government discharged various board members and illegally appointed politically affiliated individuals to the Trepca board.

In the case of the Trepca board, which was appointed on April 4, the government completely excluded the British embassy from the recruitment process. The government disclosed the list of proposed candidates for board members only after they were already selected.

Of the six appointed members, at least half of them have political connections to the three parties in power: the Democratic Party of Kosovo, PDK, the Alliance for the Future of Kosovo, AAK and the Social Democratic Initiative NISMA.

BIRN found that Ardian Syla, the newly appointed head of the board, has connections to PDK. Meanwhile, Esat Peci, one of the board members, ran for mayor of Mitrovica as an AAK candidate in the 2017 municipal elections. Another board member, Feriz Fetahu, ran for municipal assembly in Mitrovica under NISMA.

The politicized board of the Kosovo Telecom

Before the Kosovo Telecom board was voted in, BIRN found that six people were added to the commission’s list inexplicably. Initially, the list submitted to the government had 12 names, but after it reached the Prime Minister’s office, it was ‘expanded’ to 18 names.

BIRN learned that the names added to the list were: Naser Rusinovci, Flamur Keqa, Rafet Jashari, Valdrin Kasumaj, Shkelzen Ibrahimi and Skender Hoti. The current board of six members also includes Hoti, who has ties to NISMA.

The investigation also showed that the government did not consider the recommendations offered by the British experts. According to the UK embassy commissioned vetters, only three of the new Telecom board members received enough points to be shortlisted.

Four of the six appointed members have a political past with governing parties or are friends with their members.

Skender Hoti fought alongside Fatmir Limaj in the Kosovo Liberation Army, KLA, and testified in the Bellanica case. He confirmed for BIRN that he is friends with Limaj, the head of Nisma.

Fidel Krasniqi is another member of the Telecom board who is close to Haradinaj’s party. A 2013 Facebook post by AAK states that Krasniqi joined the party as an expert.

He told BIRN that he was recruited only as an external expert when AAK’s Besnik Tahiri ran for mayor of Prishtina.

Another member of the Telecom board, Sead Ujkani, is a friend of PDK MP Mergim Lushtaku, son of former mayor of Skenderaj Sami Lushtaku. BIRN contacted Ujkani who confirmed his friendship with Lushtaku, yet denied any political influencing.

The Energy Regulatory Office board

Although the Law on the Energy Regulatory Office does not restrict the appointment of previously politically active people to its board, in principle as an independent agency it should operate without direct political influence.

For its board, which is selected by the Kosovo Assembly, the list of candidates, which was provided by the government, included candidates who performed poorly in the evaluation process, but had political connections.

Both new members of the ZRRE board had received lower scores than the four other candidates by the evaluation committee, which included partners commissioned by the British embassy.

Izet Rushiti, one of the new board members, ran for local assembly councilman in Ferizaj as an AAK candidate last year, while the other member, Selman Hoti is related to as NISMA MP Enver Hoti.

Before the board members were even selected, BIRN found that the government proposed four candidates for the ZRRE board to the assembly. Two of them did not even fulfill the requirements for the position.

BIRN also found that the even the candidates who were fit for the job had political ties to governing parties.

Bekim Jakupi and Fadil Ismaili, which were at the top of the list, and although they fulfill the criteria, they have a political past with PDK.

In 2013, Jakupi was part of PDK’s Department for Economic Development for Good Governance of Prishtina, whereas Ismajli was a minister of economic development during the Thaci-led government 2010-14.

Meanwhile, the two candidates recommended by the British vetters were not considered for appointment.

The governor of the Kosovo Central Bank was appointed without the approval of the British embassy vetters, which goes against the memorandum. Moreover, the embassy was not informed about the process at all.

Veseli’s office ‘blamed’ the embassy, while the Assembly Secretary claimed he had no knowledge of the extension of the memorandum. On the other hand, the British Embassy maintained that it was expecting the assembly to inform relevant institutions about the memorandum.

Consequently, the whole recruitment process was carried out without the presence of the implementing partners, the British embassy in Kosovo, who was not informed by Kosovo institutions that the recruitment process had started. The board of the central bank had told BIRN that they did not know that such a memorandum existed, whereas the assembly gave two different responses.

In spite of that, the board of the Kosovo Central Bank proposed individuals with previous and current political ties for governor.

One of them was Besnik Bislimi, former Vetevendosje MP, and another was Safet Merovci, former minister in the Provisional Government and former advisor for the government.

The new board of the Kosovo Energy Corporation

BIRN discovered that one of the appointed members for the Kosovo Energy Corporation, KEK, board had been a member of NISMA. Meanwhile, the other members had campaigned for PDK on social media.

Ibrahimi ran for mayor of Drenas in 2013 as a candidate of the Initiative for Drenas, a party that later joined NISMA — currently a governing partner. Ibrahimi resigned from NISMA in 2016 after disagreements regarding the coalition between them and AAK.

Consequently, Ibrahimi’s appointment on KEK’s board goes against the Law on Public Enterprises, as this law requires from every board member not to have been engaged in political activity for at least three years prior to their appointment.

Another member, Vataj, was the executive director of the regional water supply company ‘Prishtina’ but was discharged after an audit revealed violations within the enterprise.

Meanwhile, Hajrizi was the executive director of the regional water supply company ‘Mitrovica’. He is remembered for trying to employ friends and family during his mandate in the company, but was obstructed by the Anti-Corruption Agency. On his Facebook profile, Hajrizi shared photos of Kadri Veseli, calling him “an undefeated leader.”

The same practice of appointments was applied when selecting for the Secretaries for the Ministry of Education, Science and Technology, MASHT, and Ministry of Trade and Industry, MTI.

The government of Kosovo appointed Ekrem Kastrati as Secretary of MASHT, despite the fact that he did not have the required qualifications.

The current Education Minister Shyqiri Bytyci is a NISMA member, and Kastrati was previously a municipal director in Malisheva, a town which is also governed by NISMA.

His appointment was done without the approval of British partners, too.

Although, as a partner and part of the evaluation commission, the British embassy said that none of the three candidates showed satisfactory results. Nevertheless, Minister of Education Bytyqi still proposed Kastrati for the position.

Similarly, the government decided to appoint Burim Rrecaj as secretary of the MTI, although he was listed fourth on the evaluation list.

A group of civil society organizations reacted against the decision.

The new head of the Kosovo Correctional Service

One of the few positions where local institutions consulted the recommendations from British partners during the recruitment process was for director of the Kosovo Correctional Service.

Nehat Thaci was evaluated as the best candidate for the position, both by the government-picked panel and by the British vetters. Rasim Selmani and Enver Rrustemi were runners-up. Thaci used to be director of the Kosovo Police for the region of Mitrovica and was previously arrested by Serbian police under suspicion of war crimes in 2016 and kept in detention for one month.

The ‘tough’ British mission to uproot nepotism in Kosovo

The government and assembly showed readiness to extend the memorandums once again, but how much they will respect them is questionable, as they have not always taken the opinion of the British experts under consideration.

When asked about the new extension, British Ambassador to Kosovo Ruairi O’Connell said that he does not want British taxpayers’ money to go to waste.

“For me, I do not want to recommend that British taxpayers’ money is wasted, but I think that this project is very important because there are two very harmful cultures in Kosovo: nepotism and crimes that go unpunished,” O’Connell said.

A cooperation memorandum with the government and assembly is expected to be signed again in June.