With a curling federation already in place, young players in Kosovo look forward to establishing proper teams to participate in international competitions.

“I was looking for places where I could go travel to curl, and I thought I could fly to Italy and play in Torino, but then, to my surprise, I came across the Kosovo Curling Federation,” said Peter Andersen, media director at RIT Kosovo, still mildly surprised by the existence of such federation in the country.

Andersen, 25, who left his home country of Canada to come to Kosovo about two years ago, has been curling stones all his life. Although the sport originated in 16th century Scotland, it is presently most popular in Canada, a country that accommodates over 1,500 curling clubs.

“I started playing when I was three years old. Since then, between every October and April, I was always curling. Coming to Kosovo was my first time that I couldn’t do that,” he said. “My home town has three curling clubs, little towns in Canada have curling clubs no matter what.”

After he moved to Kosovo pursue a tech internship, Andersen found out that Kosovo already had a curling federation, which was established in 2011, and contacted them.

“I emailed them, and I didn’t expect to hear back because I had been in Kosovo for a few months and I hadn’t seen anything close to curling,” he said.

Eventually, he received a response from Besim Hasani, who is both the president of the Kosovo Olympic Committee, KOC, and the head of the Kosovo Curling Federation, KCF.

“He set up a meeting, and after telling me along history of Kosovo, he told me that the main goal of the federation was to educate the people on curling, but he gave up after a year. Then, the federation was just a piece of paper in a closet for years until my email was sent out,” he said.

The KOC, which was recognized as a full member of the International Olympic Committee, IOC, in December 2014, had a total of 37 established sports federations as of May 2018.

Among these, there are 20 active Olympic sports federations that are fully-fledged members of respective international governing bodies, such as football, judo and boxing, as well as five recognized federations of sports that are not contested in Olympic games.

Finally, there is curling: Hasani said that the federation is technically inactive because it has no registered competing teams, yet there is an effort to promote the sport in the country.

Kosovo’s curling federation was accepted as a provisional member of the World Curling Federation in October 2012.

As for the KOC as a whole, the main criterion for it to join the IOC in 2014 was having five federations that are recognized by international governing bodies.

“Curling was one of the federations they founded to meet the requirements. He [Hasani] had begged the president of the World Curling Federation, and he got provisional membership. We can’t become a full member till Kosovo competes at two world curling events,” Andersen said.

Andersen became an advisor in the KCF, and is currently endeavoring to establish and coach the first-ever Kosovo curling team.

However, Kosovo does not have a genuine ice rink where potential players can practice and compete. In spite of that, Andersen received funding from WCF, which apportions 12 thousand to national federations every year, to purchase a plastic rink that allows players to get acquaintanced to the sport.

“We applied for the funding and then they approved it, and that’s how we have the rink here. It cost 4,700 dollars to ship it from Toronto to Zagreb, Croatia,” he said. We laid it out at the Winter Olympic festival, and when the numbers came back we found that around 5,000 people tried it.”

Since then, Andersen has assembled a team of four young players who are committed to set things moving. In late April, he organized a trip to a curling club in Budapest, Hungary, where the team practiced on ice for the first time. 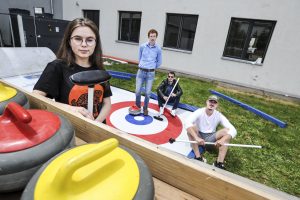 The team practicing at RIT in Kosovo. | Photo: Atdhe Mulla.

“The rink back there,” he said pointing to the rink splayed on the RIT in Kosovo garden, “You could throw rocks, but it’s not nearly the same as throwing on ice. These ones have wheels to simulate the curling that happens as it goes down the ice. The friction and everything is different,” he said.

Eldena Dakaj, a 19 year old student at RIT Kosovo, had never heard of curling before the rink was brought to her school. She said that her experience in Budapest fueled her with enthusiasm to continue practicing.

“Budapest was beautiful, but the game was even more so. As soon as I started playing, ice and I immediately clicked. I went because I wanted to do something new, and I really miss playing on a real rink,” she said.

Micah Bintz, a student from America and captain of the team, said that he was also introduced to curling in Kosovo, and that his first-ever contact with ice was in Budapest.

“I tried the curling mat, but it’s really not related at all to real curling. It’s a sport that you can pick up very easily, [but] becoming actually good takes a while though. I miss practicing a lot, I think about it every day,” Bintz said.

Andersen said that the imminent challenge to further develop the KCF is establishing more clubs in the country so that it can become fully recognized.

“What I would like to do is get lighter-weight rinks at five schools, three in Prishtina, two somewhere else, maybe in Ferizaj or Gjilan and, once we have that we can make the KCF a real federation,” he said. “I think I can probably do that by the fall.”

Andersen said that there are two competitions in the near future where a Kosovo curling team can debut internationally: the World Mixed Curling Championship 2018 in Kelowna, Canada and the Winter Universiade 2019 in Krasnoyarsk, Russia. While most curling competitions are divided into men’s and women’s competitions, there exists mixed curling, which is played by men and women together.

“I would really like to submit a mixed Kosovo curling team. We have a team if we want to [go to Canada]. The funding for the travel would have to be done by other sources. It is a little bit of a challenge,” he said.

Andersen said that curling, and other unconventional sports in the context of Kosovo, can benefit local youth and enable them to represent their country while improving their skills.

“Curling could provide more opportunities too, because so many people play football, and if you want to be in the Kosovo football team you gotta be really good, but if you wanna be in the curling team, there is nothing holding you back. You can have a group of four friends and submit a team,” he said.