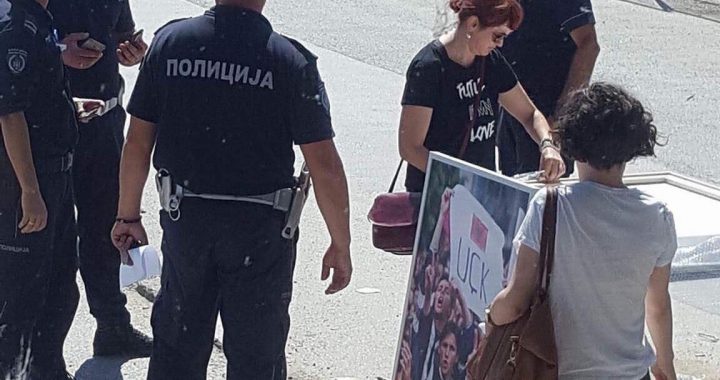 The artist unpacking her photos at the Kosovo-Serbia border. | Photo courtesy of Kushtrim Koliqi.

Exhibition photos depicting Kosovo flag and a Kosovo Liberation Army inscription, destined for a Belgrade exhibition, were stopped at the Kosovo-Serbia border.

A number of photographs and an exhibition catalog by Kosovo artist Eliza Hoxha displaying the flags of Kosovo and Albania, as well as symbols of the Kosovo Liberation Army, were barred entry into Serbia while on their way to an exhibition in Belgrade.

The art pieces were destined for an exhibition as part of this year’s edition of Miredita, Dobar Dan, an annual festival held in Belgrade to foster cultural exchange between artists from Kosovo and Serbia.

Agon Rexhepi, member of the Youth Initiative for Human Rights in Kosovo and participant in the festival, said that three photographs were stopped at the border after inspection by Serbian police.

“The photographs were wrapped up, but they uncovered them… three are definitely not making it across, they are checking the others [photos] too,” he said.

Rexhepi said that their personal items were also checked by border authorities.

“They made us leave the bus and checked all of our bags and suitcases,” he said, confirming that all of the approximately 25 people in the bus later crossed the border into Serbia.

Kushtrim Koliqi, one of the organizers of the festival, said that today’s event show that the dialogue between Kosovo and Serbia  remains a fiasco.

“Everyone who is sponsoring the dialogue should take this case as an example that nothing has changed, except for the fact that some bureaucratic politicians are meeting in Brussels and signing worthless documents,” he said. “For a moment, I remembered the queues of Kosovar civilians during the war being mistreated by those who bear the same uniforms as these people today.”

Kosovo Hashim Thaci expressed his concern about the incident on Facebook.

“By stopping Kosovo artists at the border, Serbian authorities are destroying the few possibilities of setting up normal communication with Kosovo, be it even through art, a universal language,” Haradinaj said.

Shameful scenes at the border, as #Serbian authorities are mistreating #Kosovo artists traveling to Belgrade. We demand from Serbian Gov to immediately stop abusing our citizens or we’ll take reciprocal measures. Relations can’t be normal if they ban artists to attend exhibitions pic.twitter.com/FhhlOnrTQy

Brussels freedom of movement agreement of 2011 between Kosovo and Serbia today was again violated harshly by Serbia, when at the border Kosovo artists were mistreated on their way to the exhibition to be held in Serbia. #QuoVadis #Serbia? – not likely to European Future!!!

Note: A previous of this article, originally published at 11:15 am on May 30, 2018, did not include the reactions by Kosovo politicians.