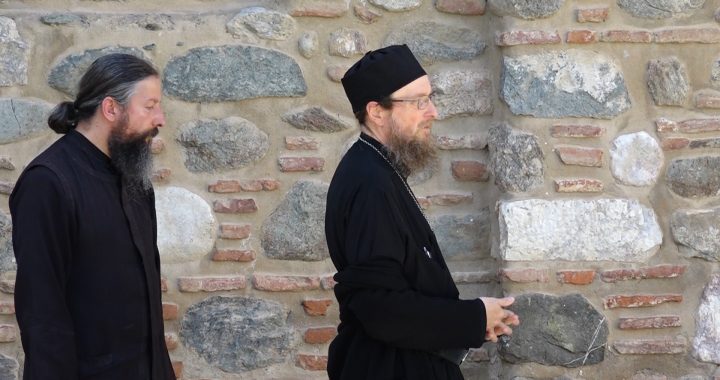 Sava Janjic, the Serbian Orthodox abbot at the centre of a row over a new road to Montenegro, tells BIRN he won't let Kosovo 'illegally' turn a country lane into an 'international road' without a fight.

Sava Janjic, Abbot of the Serbian Orthodox Visoki Decani Monastery in Kosovo, says the reason why they want work on the nearby road to Montenegro stopped is because it will directly impact on the historic Serbian pilgrimage site – and is illegal.

“The problem with the road is the problem of turning of a local 10-km-long village macadam road into an international road connecting Kosovo and Montenegro, which will pass right in front of Visoki Decani Monastery,” he said.

The Abbot said that the Implementation and Monitoring Council, the Kosovo Ministry of Culture and the Ministry of Environment had all been informed about the issue.

“We directly discussed the issue of the road at several meetings, and legal analysis was presented at this council … from the European Union and the OSCE, saying that construction of such a road is illegal, so they know it very well,” Janjic said.

Janjic said the Kosovo authorities cannot just say that the road is only being asphalted. “This is an upgrading of the road into an international road”, he insisted.

He said that in 2014 the monastery had agreed with then Kosovo Prime Minister, Hashim Thaci, now President of Kosovo, on another road route connecting Kosovo with Montenegro, passing through another nearby village, Lloqan.

“Thaci, who was then PM of Kosovo, in 2014 inaugurated … this road [showing it on a map] to Plave [in Montenegro]. And we greeted this as a reasonable decision, which would avoid heavy traffic through the [monastery’s] Special Protected Zone,” Janjic said.

Asked why the construction of hotels and hydro-power plants had been allowed inside the Special Protected Zone some years ago, he stated that it was a different issue.

Referring to Article 5 of the law on the protected zone, concerning “Industrial construction or development, such as … exploitation of mineral resources and the building of dams, power plants or power lines, kilns and factories, and transit roads in rural areas,” he said they had “expressed concerns that they must not damage the area”, but added that they were of “major importance for people”.

He added that the plans for three hydro-power plants built by an Austrian company , Kelkos, had gone to the monastery after legal analysis was done.

“Legal analysis found out that these power plants would not damage the area,” Janjic said, adding: “We did not react because we believed that this was in Kosovo’s interest”.

In 2016, a report of the Energy Regulatory Office found that the company illegally provided electricity to the monastery, but Janjic later denied this had occurred.