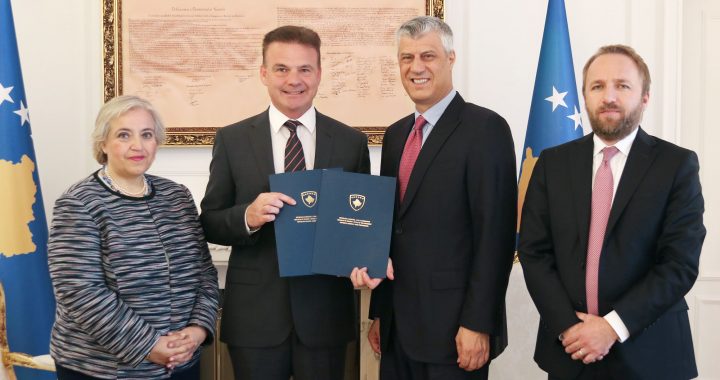 President Thaci submitting the correspondence. | Photo courtesy of the Office of the President.

Kosovo President Hashim Thaci sent a correspondence to the European Union, affirming the end of the mandate of EU’s rule of law mission in Kosovo.

According to a press release issued by Thaci’s office, the letter was received by EU Civil Operations Commander Kenneth Deane and EULEX Chief Alexandra Papadopoulou.

“The contents of the letter were negotiated between the Kosovar and EU parties and set out conclusion of the executive mandate of EULEX and the reduction of its role to monitoring and advising during the final phase of the mission,” the release read.

Thaci said that Kosovo institutions have benefited from the cooperation with EULEX.

“Thanks to this cooperation, we have raised local capacities to be completely responsible for the rule of law,” he said.

He evaluated EULEX to be a successful mission.

“The mandate will end on June 15, whereas the future mission will focus on the full transfer of competences to Kosovo institutions, and the conclusion of the mission,” the press release reads.

The EU Rule of Law Mission was deployed to Kosovo one day before the country’s declaration of independence in February 2008, taking over administration and executive control over the police and judiciary from the UN Mission in Kosovo, UNMIK.

In 2014, EULEX handed over the executive functions to local judicial institutions, but still retained the ability to have complete control over cases initiated prior to that date.