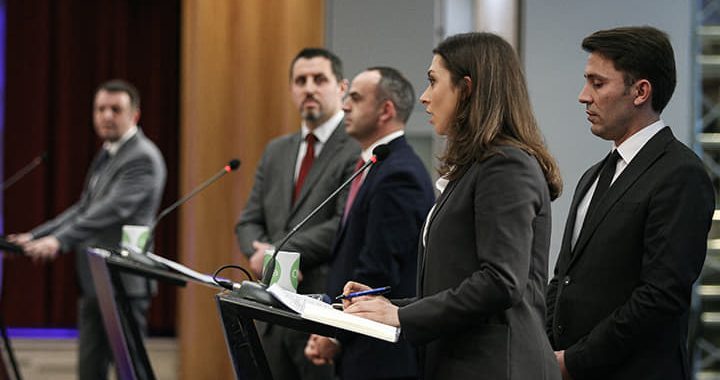 Representatives from LDK, AAK and Vetevendosje outlined their parties’ policies to tackle corruption in the first of BIRN’s pre-election debates on Wednesday night.

On Wednesday, as the campaign for Kosovo’s parliamentary election on February 14 officially kicked off, BIRN launched its DebatPernime (Debate For Real) series, which scrutinizes Kosovo’s major political parties’ plans for governance.

The first issue tackled on the show was the rule of law and the fight against corruption, with representatives from the Democratic League of Kosovo, LDK, the Alliance for the Future of Kosovo, AAK, and Vetevendosje outlining their party’s policies in this area.

Opening the debate, AAK’s outgoing Minister of Justice, Selim Selimi, stated that his party had taken a number measures to tackle corruption over its six month tenure of the ministry. He pointed to changes made to regulations on whistleblowing, which he stated encouraged citizens to inform authorities about corruption, as more protection was provided to whistleblowers.

Selimi also highlighted that the incumbent Kosovo Government changed the Criminal Procedure Code to further punish officials indicted on corruption charges, as anyone holding an official position must now be suspended if an indictment containing corruption charges is filed against them.

LDK’s Shkemb Manaj, however, argued that the minister was taking credit for key achievements in tackling corruption that were initiated by his party, adding that a future LDK government will further commit to this fight.

“We believe that the fight against corruption is one of the key challenges that the country has, but LDK, with all the mechanisms it has, will guarantee that it will be committed to the fight against corruption,” he said. Manaj added that LDK is focused on empowering justice institutions and particularly the Anti-Corruption Agency, by increasing its budget and its staff.

Vetevendosje official Adnan Rrustemi concurred with his counterparts that the fight against corruption was one of the key battles facing the next government, adding that his party would focus on corrupt officials in high positions.

Rrustemi stated that a new agency was required to investigate high level corruption. “We need to say loud and clear that corruption in Kosovo is centred around officials in higher positions and, as a consequence, we have foreseen the establishment of a Bureau of Investigation only for high level officials,” Rrustemi said.

Manaj responded by stating that a legal basis must first be created in order to establish a new bureau, adding that it was important not to rush into its formation.

Rrustemi countered by declaring that the fight against corruption first requires political willingness. “Besides legal infrastructure and institutional support for the existing mechanisms, the will of central institutions to fight corruption is crucial, and has been missing so far,” the Vetevendosje representative said.

Doarsa Kica, who appeared alongside Rrustemi representing Vetevendosje, echoed her party colleague, adding that a legal basis has existed for some time but failed to bring results. “We have 19 institutions that deal with corruption in Kosovo, but we do not know who is really responsible for tackling corruption,” Kica said.

Minister Selimi twice drew attention to the closure of the Anti-Corruption Task Force by outgoing Prime Minister Avdullah Hoti’s office, blaming LDK for damaging the public’s perception of the fight against corruption.

“The perception is: ‘What are you doing in the fight against corruption?’” Selimi said. “If you start using a sword to dismantle institutions then the perception will be that you are not fighting corruption sufficiently.”

BIRN’s Jeta Xharra then focused the debate on conducting a vetting process in Kosovo’s security and judicial institutions, working groups for which have been established by the previous two Kosovo Governments.

Incumbent minister Selimi stated that vetting should not only be applied to the state prosecution and courts but to other institutions, adding that it should be seen as a positive process. “Vetting should not be conducted to punish, or to use the stick on the judiciary, but to preserve those working with honour, and remove those corrupted,” he said.

Shkemb Manaj insisted that LDK is also committed to vetting, highlighting the party’s support for the process over the last year. “As institutions and as a state we are late in starting this process,” he said. “But during its governance with Vetevendosje and afterwards the Democratic League was engaged in this process.”

Manaj suggested that vetting should be applied to justice and security institutions, adding that the Constitutional Court should also be subject to the process, which he predicted could be concluded within three years.

Rrustemi said that vetting is Vetevendosje’s key policy in the justice sector, and that the process will be concluded within the mandate. “We believe that vetting should start with the Kosovo Judicial Council and Prosecutorial Council, as well as with the heads of the courts, police and intelligence,” he added. “It needs to tackle three key elements: wealth verification, professionalism and moral integrity.”

An invitation to this debate was also extended to the Democratic Party of Kosovo, PDK, but was declined due to a dispute with the broadcaster. The Social Democratic Initiative, NISMA, also received an invitation, but the party’s representative failed to attend the debate.

BIRN’s second debate will cover issues relating to the environment, energy and agriculture.