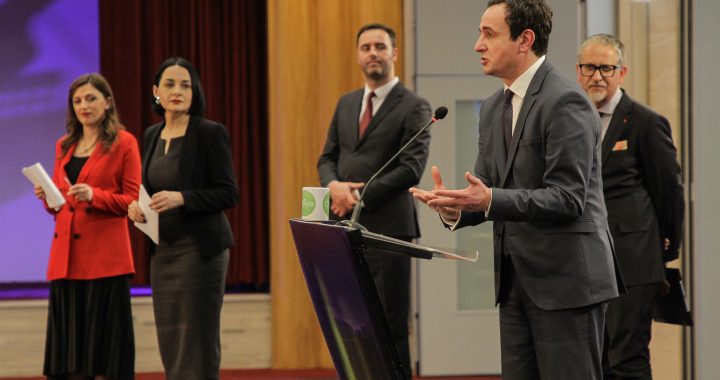 Representatives from Vetevendosje detailed their plans for governance in a BIRN electoral debate on Thursday, outlining schemes to tackle poverty, promising reciprocity with Serbia and dismissing elements of the Washington agreements.

On Thursday night, BIRN’s Jeta Xharra hosted Vetevendosje leader Albin Kurt and a team of senior officials to discuss the party’s governance plans, less than two weeks before Kosovars head to the polls to vote in parliamentary elections on February 14.

Kurti stated that one of the key priorities for a Vetevendosje government would be to examine actions taken by the previous government led by Avdullah Hoti. “One of the first decisions is to review all the decisions made in the last six months and reverse them,” he said.

The party’s candidate for prime minister stated that the biggest issue currently affecting Kosovo was justice, both in the legal system and in the economy. “When we say justice we do not mean only in the courts, but social justice and justice in employment,” Kurti said. “When we say employment, we mean employment with dignified working conditions, without risks and any form of discrimination.”

Kurti added that it was crucial to connect the job market with the education sector, and with vocational education in particular. “Half of our youth are unemployed, while the majority of those who work are not employed in their trained profession,” he said.

The party highlighted high levels of emigration as one of the key challenges that need to be addressed, and promised to undertake a number of measures to halt the exodus of citizens, including tackling poverty.

“All citizens that live on less than a euro per day will be taken out of extreme poverty,” Kurti pledged. “By removing people from poverty, we are removing children, women and the elderly from social misery.”

As part of their attempts to eradicate poverty, Vetevendosje promised to increase the minimum wage from 170 to 250 euros per month. “We consider that 250 is fully attainable and we believe that the fight against informality in the economy will make it possible to increase revenues,” Kurti said.

On the subject of employment, Xharra questioned Kurti over whether Vetevendosje would also continue to appoint persons affiliated to the party to the boards of public enterprises, as happened under the party’s previous coalition government with LDK.

The former prime minister conceded that four of the people appointed had links to the party, but insisted that they “were renowned for their professionalism and not for their party membership card.”

In addition to raising the minimum wage, representatives from the party outlined other schemes to help tackle social inequality. Deputy Speaker of the Kosovo Assembly Arberie Nagavci stated that a Vetevendosje government would provide subsidised social housing – offering 4,000 apartments to young couples with mortgage payments of 150 euros per month over a period of 150 months.

Nagavci said that families with lower incomes will also be supported through a number of education schemes, including 1,000 scholarships for young women, with a focus on the natural sciences. “We also plan to scrap payment for [public] pre-schools for families living with low incomes and in poor economic conditions,” she added.

Former Vetevendosje MP Mimoza Kusari stated that financing for these social schemes can be created by freeing up capital from large-scale investment projects, many of which she said need to be reviewed. “Financing highways with state money will come to an end,” Kusari-Lila said.

Xharra asked Kusari to identify the party’s position on the much debated Dukagjini Highway specifically, which the former MP has often criticised in the past. “The Dukagjini highway, which was proclaimed by the PAN government, is not necessary, we need to widen the road but not to build a highway,” she said.

Reciprocity with Serbia and the Washington agreements

In terms of foreign policy, former Minister of Foreign Affairs Glauk Konjufca pledged to review all foreign policy decisions taken by the Hoti government, and use reciprocity as a guiding principle in relations with Serbia.

“Vetevendosje will apply the language of reciprocity in all spheres,” said Konjufca, adding that the party would also seek to protect rights for the ethnic Albanian minority living in Serbia. “It will be a state policy that the rights of Albanians living in Presevo, Medvegja and Bujanovc should be equal to the rights of Serbs living in Kosovo Republic,” he pledged.

Xharra pointed out that if reciprocity was to be applied consistently, then Kosovo Serbs would not be able to use their own textbooks in primary and secondary education, and whether a Vetevendosje government would translate state textbooks into Serbian.

“In fact, under a second Kurti government, universal education will be applied across the Republic of Kosovo,” Konjufca replied. “In terms of curricula and content, there will be no differences on subjects such as history.”

Konjufca added that a Vetevendosje government would not be committed to all aspects of the agreements made by the Hoti government in Washington DC under the auspices of the Trump administration.

The former foreign minister argued that Serbia has been violating the agreements constantly, pointing to Serbian officials continually opposing recognition for Kosovo, despite pledging to halt its derecognition campaign. “We cannot be overly polite to Serbia, whose aim is to deny the existence of Kosovo statehood,” he said.

Konjufca added that any document that violates Kosovo’s sovereignty will not be accepted by a Vetevendosje led government, and that the party would not accept sharing natural resources, such as the Ujmani lake, with Serbia.

Addressing Kosovo’s recognition by Israel last week, Konjufca stated that it was an important step, but added that the decision to locate Kosovo’s embassy in Jerusalem was “not a wise policy.” He conceded that if the EU insisted on relocating the embassy in order for Kosovo to accede to the union, the decision “would have to be reviewed.”

Former Minister of Health Arben Vitia was also present at the debate to discuss health issues, and Xharra highlighted his absence from the public sphere since the Kurti government fell, despite the ongoing COVID-19 crisis.

“Good to see you Mr Vitia, we haven’t seen you since you were a minister,” Xharra said. “Why haven’t we seen you for so many months? Should you only talk when you are in the government?”

Vitia defended his record, stating that he has spoken to citizens through a number of gatherings. “The fact I was not on TV does not mean I wasn’t active,” he said.

Jeta Statovci, another candidate for MP running under the Vetevendosje list, stated that Kosovo’s long awaited health insurance system would be implemented within the mandate of a Vetevendosje-led government. However, she was not able to provide an exact date that she expected the system to be functional.