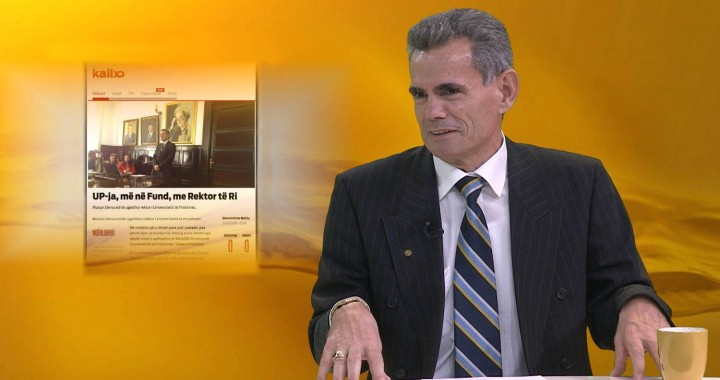 A journal article by the recently-appointed rector of the University of Prishtina was published in a suspect Indian journal, which experts and evaluation platforms allege is fraudulent

University of Prishtina rector Marjan Dema was promoted from associate professor to full professor after publishing in a journal that could be fraudulent, an investigation has revealed.

Furthermore, Dema’s promotion to the post of full professor in 2012 could have failed to fulfill the criteria.

Dema does not have five published articles as the university’s statute requires, but only four.

Moreover, one of his articles was published in a journal that is suspected to be fraudulent, Prishtina Insight revealed.

While the article itself and its quality is not contested, serious doubts have arisen over the ‘scientific journal’ where this article was published.

The journal where the current rector Dema has published, according to his CV, is the India based International Journal of Mathematical Archive, IJMA. India is known to be a haven for fraudulent websites and journals, since local authorities have not regulated their publication by law.

The article in question is the first one listed on his CV, titled “Certain Inequalities for (∞, m) – Convex functions.”

In the  IJMA’s website, the “contact us” page lists no address or journal publishing site. In the scientific research community this is considered an indication that the journal may be fraudulent.

This journal also claims unusual impact factors, which were determined by two suspicious companies, SJIF and Index Copernicus. The companies list the journal at 4.091 and 5.09 respectively, but these impact factors are unusual for exact scientific journals since the number of articles produced in these fields is small.

In math and similar sciences, there is little left to be discovered and little space to bring innovation, so the number of newly published scientific articles is very low compared to other fields, particularly the humanities.

Since there are so few scientific articles, a new article’s number of citations referring to old articles is very small. A coefficient as high as the ones given for Dema’s article is unrealistic.

Another problem is the fact that IJMA’s editor-in-chief Dr. SK Tiwari, managing editor Dr. DK Kachhara, and associate editor N. Kacchara each hold the same positions in two other journals, one for pharmacy and the other for algebra. In the fields of exact sciences, it is impossible for the directing board of a journal to be implicated in other fields, and let alone to manage more than one journal at the same time.

Both of these journals have the same website designs as the journal where Rector Marian Dema published.

An article titled “Publishing Ethics and Predatory Practices: A Dilemma for All Stakeholders of Science Communication,” describes the exact circumstances of IJMA.

“Illegitimate publishers put editing boards in a few journals, representing different fields. They, also, can list known scientists as members of their editing boards without their approval,” the article says.

For this issue, BIRN contacted American professor Jeffrey Beall, a librarian and lecturer at Colorado University.

Beall became famous worldwide when he compiled a list of fraudulent journals. He saw that many scholars are being deceived and are publishing in journals which are oriented towards financial gains and not article quality.

He has since received many threats for lawsuits and criticism, but this has not stopped him from updating his site with the list of journals that should be avoided.

One of them is IJMA, the journal where Dema also published.

Professor Beall, who has explained this international problem in The Guardian and New York Times, was contacted by Prishtina Insight on the specific case of IJMA.

Asked about the specific journal, he supported the findings of Prishtina Insight, and showed us his own investigation on this journal.

Beall emphasized that the claimed impact factor of this journal can not be legitimate.

“The journal knows that researchers want to publish in journals with impact factor,” Beall said. “They use false metrics to attract larger applications and naturally the money that come behind it.”

Meanwhile, the journal where rector Dema published was evaluated with the impact factor by two companies which Beall considers fraudulent: SJIF and Index Copernicus.

“I think it’s a poor, insincere and untransparent journal. It doesn’t follow the standards of the industry of researchers’ publications. It exists only to make easy money for the owner, offering easy, fast and cheap publication for the authors,” said Beall.

Virginia Tech Professor Besnik Pula told Prishtina Insight that he “finds it weird that the same editor who runs the math journal also runs the pharmacy one.”

“This is extraordinarily suspicious, knowing that those are two completely different fields,” said Pula.

He explained that the problem with fraudulent journals is a global one, but that there are ways to stay informed and protected.

“First, usually, different disciplines have their own known and cited journals. Second, the same goes for journal publishers and universities where the journal directors or members of the editorial board are,” emphasized Pula.

He explained that a journal that is directed by professors in an unknown university in India or Azerbaijan is considered suspicious.

“Journals that publish in exchange for payment are usually not credible because they publish articles without putting them through the ‘peer review’ process, or without a credible ‘peer review.’ These are just fraudulent businesses that are posing as academic journals,” said Pula.

After consulting several members of the science community, Prishtina Insight learned that in addition to reviewing the quality of a journal, there are more ways to assess academic legitimacy of a journal. One of them is the platform SCImago Journal’s Country Rank, which ranks journals from quarter 1 to 4. Quarter Q1 contains the quality journals, while in Q4 the less quality ones.

Prishtina Insight also requested information from IJMA, but received no answer from them–not even a confirmation for receiving the email.

Dema did not answer the concrete questions about his article published in this journal.

“I will have you know that my advancement, four years ago, went through all the normal instances foreseen by the Law for Higher Education and the University of Prishtina statute in that period,” said Dema.

He added, “the period of my promotion to full professor has lasted a total of 18 years.”

Similarly, BIRN has published an investigation previously where it was revealed that a member of the Directing Council of UP, Fevzi Berisha, had been promoted without even publishing his scientific article.

In 2013, former rector of UP Ibrahim Gashi was forced to resign after citizens and students protested his academic promotion, which Gashi was granted after his involvement as one of five authors who published an article in a fake scientific journal.