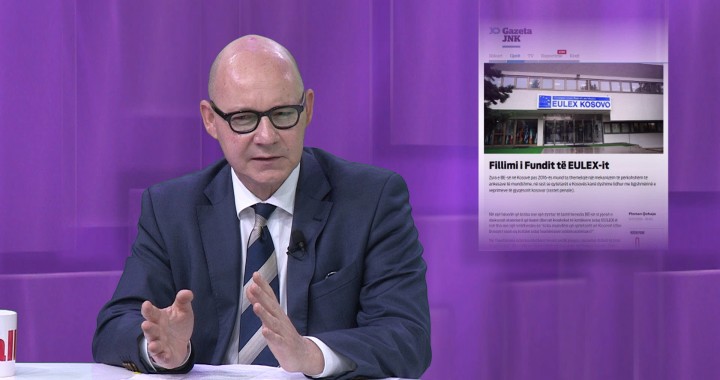 Meucci: EULEX’s job is far from over

A new EULEX mandate is still necessary while convicted criminals are getting out of prison and leaving the country, the outgoing head of EULEX, Gabriele Meucci, says.

The outgoing head of the EU rule-of-law mission in Kosovo, Gabriele Meucci, took on the job thinking that he would be closing down shop. However, recent incidents in the Kosovo judiciary have convinced him and his bosses that the mission’s job is far from over.

“I can tell you that until last summer, in 2015, we were all working for a definitive handover, final conclusion of the mission and a handover of all cases to Kosovo’s judicial system,” Meucci said.

“Then, in the summer and autumn of 2015, there were many incidents. All these came alight and the member states started to rethink if it’s premature [to leave].”

On June 14, the Council of Europe extended EULEX’s mandate until June 2018.

“The member states want to have the theoretical possibility, in case of an exceptional event, [for EULEX] to start a new case,” Meucci said.

Meucci, who was brought in as the mission’s “liquidator” in October 2014, explained that there were five specific cases that were pivotal in the decision to extend EULEX’s mandate, all involving politicians.

“The five incidents are: three people in prison serving a definitive sentence; they should stay in jail for many years for war crimes, and they are free now,” Meucci said, without referring to specific cases: “They were set free for humanitarian reasons by the Ministry of Justice.”

In July 2015, citing health reasons, the Ministry of Justice signed the release of Sabit Geci, who was sentenced for war crimes. In October, EULEX repealed the ministry’s decision and put Geci under house arrest.

Similarly, the Mayor of Skenderaj, Sami Lushtaku, who had been jailed for war crimes, was temporarily released for health reasons before he was arrested by EULEX in an alleged attempt at flight.

“[Then] there are two members of parliament that it took us I don’t know how many months to convince the authorities that if you have final verdict you probably have to go to jail, you cannot just stay in the waiting room forever,” said Meucci, most likely referring to the cases of the two former Kosovo Liberation Army fighters Rrustem Mustafa and Latif Gashi, who were also convicted of war crimes.

Meucci also recalled two other cases that convinced the EU that the mission still had a role to play.

“Two people were sentenced to jail and after a couple of days left the country through a normal border crossing with a passport and they are now somewhere in the world,” he said, referring to Lutfi and Arban Dervishi who were jailed for eight years each for organized crime and people trafficking.

Meucci also discussed the challenges of dealing with war crimes, explaining that in such cases “fast solutions” are unrealistic.

“We have to expect that it will take a long time because you have to have access to information on war crimes,” he explained, adding that since most of the relevant information is in Serbia, it makes prosecution of such crimes in Kosovo particularly difficult.

“The majority of war crimes committed from Serbia’s side have been committed by an authority that doesn’t recognize Kosovo, so it doesn’t want to communicate,” Meucci said, adding that Kosovo prosecutors cannot even start a procedure against a person who is not physically present in the territory.

Since most of the defendants are in Serbia and no extradition agreement between Serbia and Kosovo is in place, the prosecution of these cases is difficult.

At the moment, the European office in Prishtina functions as a channel of communication between Belgrade and Prishtina prosecutors. However, a technical agreement of cooperation is in sight.

“I think it will be a big step ahead and one thing I am proud that I organized a meeting here,” he said, adding that a draft agreement has now been compiled.

After Meucci took the job, he claimed a lot of pressure came from Brussels.

“I always had a very clear stand: I’m going to take responsibility for this mission,” said Meucci, who arrived in Kosovo just after a major corruption scandal involving the former prosecutor, Maria Bamieh, erupted.

“I didn’t behave as a puppet,” Meucci concluded.