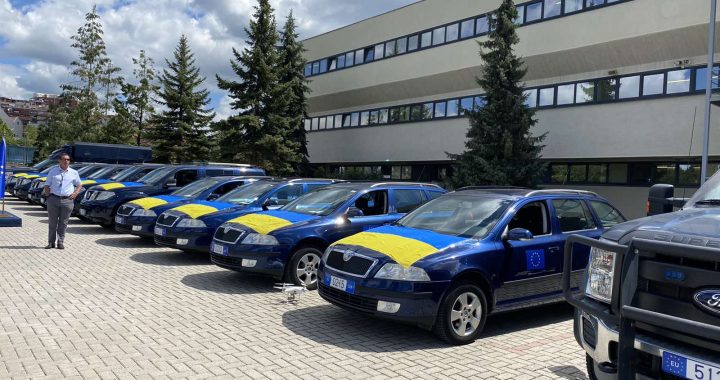 A convoy of 10 EULEX vehicles and two special prisoner escort vans departed on Tuesday from EULEX headquarters in Prishtina to support the Ukrainian police, the Border Guard Service and suffering people generally.

The head of the EULEX Mission, Lars-Gunnar Ùgemark, said that two of the vehicles will be donated to the Ukrainian Police.

EULEX staff also collected cash to support 23 families located abroad. The vehicles are loaded with food and other items, including clothes, sleeping bags, personal hygiene items, and medical supplies, collected and paid for by EULEX international and local staff.

“This donation is only a part [of our help] for our brothers and sisters in Ukraine. Three months ago we donated bulletproof vests to soldiers in Ukraine. Many citizens of Kosovo know very well what it means to be a refugee and to face aggression,” the EULEX chief added.

Kosovo’s Minister of Foreign Affairs and the Diaspora, Donika Gërvalla-Schwarz, thanked EULEX for the creative initiative.

“We stand strongly on the side of Ukraine, not only with the resolution approved in the Assembly, but with the housing of journalists as well as the sanctions against Russia and Belarus. The citizens of Kosovo understand very well what they are going through, please see solidarity as something very normal,” Gërvalla told the vehicle donation ceremony.

The head of the EU Office in Kosovo, Tomas Szunyog, said that the war in Ukraine, which began in February, had been the biggest geopolitical and security challenge in Europe in decades.

“I am proud that Kosovo has clearly aligned with the [Western] sanctions; this is a message that demonstrates that Kosovo has a place among the families of the European Union,” said Szunyog.

The High National Representative of the Ukrainian Contingent in KFOR, the Kosovo peacekeeping mission, Ivan Nastenko, thanked EULEX and the EU on behalf of the people of Ukraine.

“Today, I have mixed emotions, I feel ashamed that my friends are sacrificing their lives, I am proud that today I serve our partners who are ready to share the burden that Ukraine is not alone in this war,” he said in the vehicle donation ceremony.