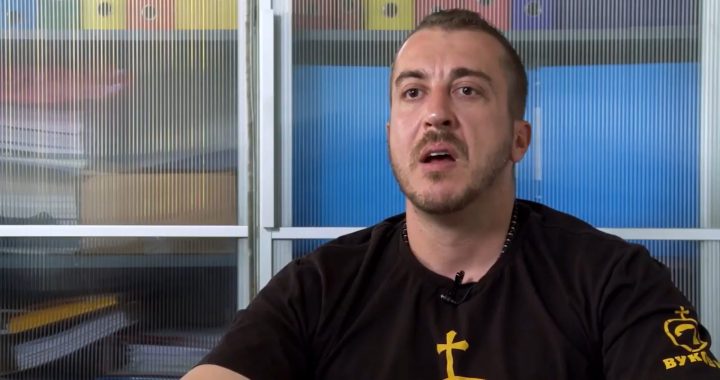 Screenshot of Zoran Raskovic speaking in BIRN 2015 documentary The Unidentified.

Member of the ‘Jackals’ Serb paramilitary unit Zoran Raskovic told the Belgrade Higher Court that one of defendants in the case of war crimes in four Kosovo villages in spring of 1999 was present during the shooting of a group of Albanian civilians.

Predrag “Madzo” Vukovic was among the group of Serbian fighters that abducted and killed a group of captured Albanian civilians in the village of Cuska/Qyshk, in Kosovo in May 1999, his fellow fighter, Zoran Raskovic, said, adding, however, that he did not see Vukovic shooting anyone.

Raskovic told the Belgrade Higher Court that Vukovic came to his unit after other crimes committed in the village of Ljubenic and that he remembered Vukovic “going into action with us”.

Raskovic said Vukovic, together with two other fighters, Ranko Momic and Nikolic Milojko “Sumadija”, took the group of some 15 or 20 people to an unfinished house in the village and shot them dead.

“He was in the group that led to the shooting; Momic Ranko led and organized it; I heard the shots, I saw Ranko, ‘Sumadija’,” Raskovic said.

“I heard shots, [but] whether from one, two or three guns, I don’t know,” Raskovic added, explaining that he did not see Vukovic actually doing the shooting.

Vukovic is one of 11 former members of the 177th Yugoslav Army Unit on trial for committing war crimes in the western Kosovo villages of Zahac/Zahaq, Cuska/Qyshk, Pavlan and Ljubenic in May 1999. The indictment alleges that they killed at least 118 ethnic Albanians.

He was arrested in 2018 and appeared in court for the first time in November 2019. He is accused over crimes in the villages of Ljubenic and Cuska/Qyshk.

Raskovic, a former member of a Serbian paramilitary unit known as the Jackals, one of the prosecution’s key witnesses, this time – his 11th time in total – testified in Vukovic’s defence. He was interviewed for a BIRN documentary that investigated the commanders behind the 1999 Kosovo massacres.

The Belgrade Higher Court spent a year trying to get Raskovic to testify, since he was then in prison in Germany. At Friday’s hearing, Raskovic was present in court, however, having been extradited from Germany in connection with another criminal proceeding in Serbia.

At a hearing in November 2015, Raskovic told the court that his fellow troops executed more than around 60 men in the Kosovo village of Ljubenic on April 1, 1999, and he talked about crimes in Cuska/Qyshk in 2011.

It was initially planned that Raskovic would testify under a codename to conceal his identity, but for the first time in Serbian court history, a protected witness decided to testify publicly, so he could “tell the truth about the horrors in Kosovo”, as he said.

On Friday, Raskovic asked the Belgrade Higher Court to give him the status of protected witness again, claiming that he had received death threats related to his family if he continued to testify.

Defence lawyers opposed this, claiming that he was lying and trying to manipulate the court.

The former soldiers were initially convicted in 2014 and sentenced to a total of 106 years in jail, but the Serbian appeal court reversed the verdict in 2015 and sent the case for retrial.