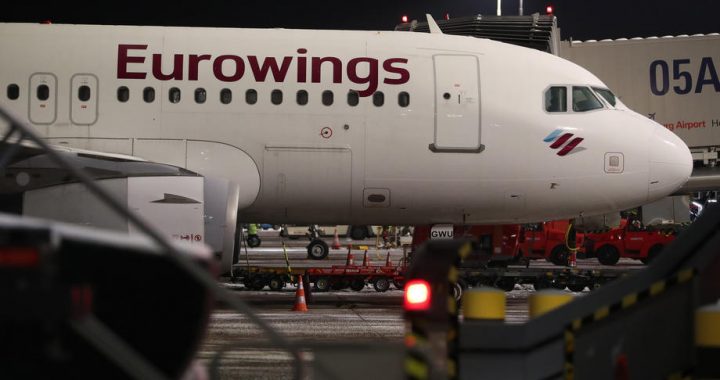 A plane of German airline Eurowings at the airport of Hamburg, northern Germany, 31 January 2021. Airlines suffer under travel restrictions during the COVID-19 pandemic caused by the SARS-CoV-2 coronavirus. EPA-EFE/FOCKE STRANGMANN

The resumption of direct flights between Belgrade and Prishtina, trumpeted in 2020, has still not occurred – with designated carrier Eurowings blaming the COVID-19 pandemic for the delay.

Direct flights between Belgrade and Prishtina, announced in January 2020, have not been restored yet due to the Corona crisis, BIRN has been told.

The Lufthansa group subsidiary that was supposed to realize the project, Eurowings, told BIRN that on this route “unfortunately there is still no further movement as a result of the Corona pandemic”.

Eurowings did not answer BIRN’s questions about deadlines for resuming flights, nor about why they decide to operate this line in the first place, in terms of assessments about possible traffic and profit.

Kosovo and Serbia institutions have stayed silent on the matter.Bujar Ejupi, head of the Kosovo Civil Aviation Authority, told BIRN he “has no information” on why the Pristina-Belgrade airline was not active. BIRN also contacted Kosovo’s Ministry of Environment, Urban Planning and Infrastructure, as well as the Prime Minister’s office but did not receive any responses from them by the time of publication.

BIRN did not get any answers from Serbia’s Ministry of Construction, Traffic and Infrastructure nor Ministry of Economy, whose then minister signed the deal.Representatives of Kosovo, Serbia and Lufthansa signed letter of intent to re-establish the Belgrade-Pristina air route in the US Embassy in Berlin on January 20, 2020.

The air bridge was broken as the Kosovo conflict escalated in the late-1990s.It said, among others, that “Eurowings and carriers of the Lufthansa Group shall have full authority to sell tickets, define its passenger fares and cargo, as well as mail rates only for the respective services between Pristina and Belgrade vice versa”.

Eurowing’s then chief operating officer, Michael Knitter, said after the signing that “by establishing an air link, Kosovo and Serbia are taking a step towards rapprochement on the initiative of the US”.Local and international leaders hailed the decision.

It was welcomed as “historic” by US National Security Adviser Robert O’Brien and by former US president Donald Trump’s envoy to the Kosovo-Serbia dialogue, Richard Grenell.

As US envoy, Grenell sidestepped European Union-led efforts to settle ties between Serbia and its former Kosovo province and carved out a parallel US mediation process that claimed to put economic interests ahead of political disagreements.

His legacy included Serbia-Kosovo deals about a rail corridor and a highway signed some three weeks later.The “crown” deal was the one that Serbian president Aleksandar Vucic and former Kosovo Prime Minister Avdullah Hoti separately signed with Trump in September 2020.

This emphasized air, rail and highway links as well as some political and economic topics.BIRN analysis has shown that most of those agreements have not been fulfilled so far.

The air link and rail corridor are not active, Serbia did start to build part of highway from Nis, in south of Serbia, to the Merdare border crossing with Kosovo. Serbian President Vucic held a ceremony marking the start of construction in December 2021. But media in Serbia reported in 2021 and 2022 that the construction site was now empty.