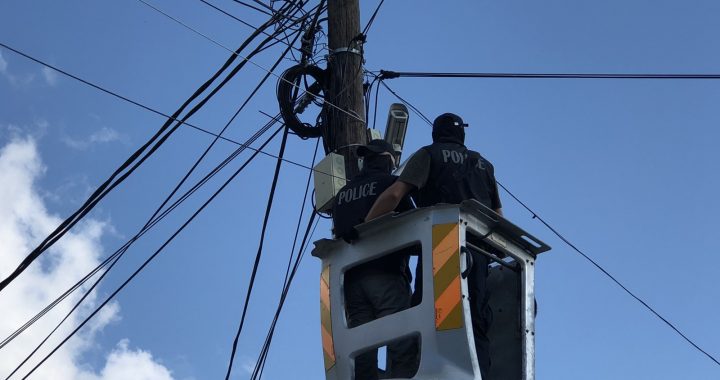 Kosovo police on Thursday removed surveillance cameras in the mainly Serbian Shterpce/Strpce municipality on suspicion that they were controlled by Serbia's security services – which the Serbian government has denied.

Kosovo police on Thursday removed surveillance cameras in the southern Serb-majority municipality of Shterpce/Strpce, acting on the orders of the Ferizaj/Urosevac Basic court and prosecution.

They were told to remove surveillance cameras allegedly controlled by the Serbian authorities, and empty a previously closed municipal building.

“The surveillance cameras … monitored the movements of the citizens and public institutions of the Republic of Kosovo,” Ferizaj/Urosevac prosecutor Rasim Maloku, who requested the raid, told BIRN. “This information [from the cameras] was delivered to the security structures in Serbia,” he claimed.

Besides removing the surveillance cameras, police raided a local elementary school where the monitoring devices for the surveillance cameras were apparently located, according to the prosecution.
The police also emptied the vacant offices of the Serbian-run “parallel administration” in Shterpce/Strpce, which the police had closed earlier, in March.

They also raided several other locations connected to the allegedly illegal issue of construction permits for villas on Mount Brezovica, a winter tourism resort in the Sharri National Park in south-east Kosovo.

The “parallel administration” office in Shterpce/Strpce was one of a network of Belgrade-run and funded institutions in Serb-majority parts of Kosovo that operate independently from the Kosovo government.

“Two suspects were arrested… N.G., a customs officer, and S.I., chairman of the board of the Ski Centre Brezovica,” the prosecution notified.

Case prosecutor Maloku told BIRN on Thursday that “these illegal structures are against the judicial and Constitutional order of the Republic of Kosovo,” adding they commit the crime of “association for unconstitutional activities related to the crime of espionage”.

The Serbian government’s Office for Kosovo condemned the police raids as an operation aimed at “new intimidation and harassment of Serbs in this municipality”.

“Although the units from Pristina know very well that the cameras, which were legally installed almost ten years ago, have not been in operation for a long time … this served as an excuse for them to invade Strpce again and harass the people,” the press release read.

During this action, by order of the Court of Ferizaj and under the supervision of the prosecution, dozens of files were seized, which were located in the offices of the former parallel bodies of Serbia in the municipality of Shtërpce/ Štrpce.

BIRN previously reported on the existence of such surveillance cameras in Serb-majority municipalities in Kosovo.

In February BIRN identified two such surveillance cameras in North Mitrovica, several in Zvecan and others in the village of Zubin Potok. By law, any cameras directed at public streets should be the sole responsibility of the Kosovo police.

Dozens of people have meanwhile been arrested in connection with the Brezovica case since December 2021.

The prosecution’s file, which BIRN has seen, claims that constructors gave millions of euros to the municipality of Shterpce/Strpce and the Environment Ministry in return for building permits in the resort.

“It is suspected that some villas and cars have been acquired as gifts for issuing construction permits [for villas in the Sharri National Park],” prosecutor Maloku told the media in December.