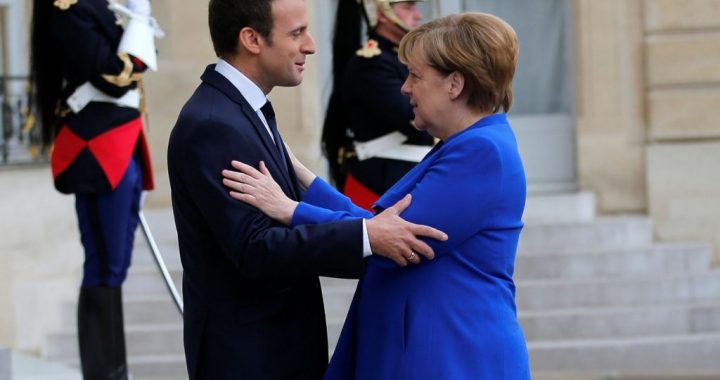 Merkel and Macron: the new stars of the dialogue?

The final deal between Kosovo and Serbia was at the epicenter of the Berlin Summit talks on Monday, a meeting which gathered Western Balkan leaders in Germany to discuss regional stability and security issues.

In what seemed to be a push to restart the dialogue for normalization of relations, spearheaded by German Chancellor Angela Merkel and French President Emannuel Macron (rather than the EU’s foreign policy body), no new conclusions were drawn on the EU’s vision for Kosovo and Serbia’s path to a final deal.

As the New York Times wrote on Monday, Merkel and Macron’s mission here goes beyond trying to normalize relations between Kosovo and Serbia. The two leaders also bear the laborious task of finding a common ground between the two top Kosovo politicians, its president and prime minister, who share rather different perspectives on what the final deal with Serbia should look like.

Kosovo President Hashim Thaci introduced his idea of ‘border corrections’ last summer, with Prime Minister Ramush Haradinaj opposing the idea of a territorial exchange between Kosovo and Serbia from its inception.

Acting somewhat out of character, Haradinaj did not address journalists outside of Merkel’s office following the meeting on Monday, while President Thaci appeared ready to clarify exactly what was agreed upon during the summit.

“We agreed to disagree,” Thaci responded.

Thaci’s conflict seems to lie not with Serbian counterpart, President Aleksander Vucic, but rather with his colleague, Kosovo’s prime minister.

On Tuesday, Haradinaj told Kosovo media in Berlin that Chancellor Merkel was resolute, stating that “border changes is not an option,” and that such a policy would harm the regional stability often embraced by the Kosovo prime minister.

Thaci told journalists that there will be “no land swap,” but that he will work hard to ensure that Presevo Valley, an Albanian majority area in southern Serbia, becomes Kosovo’s territory when he seals the deal with Vucic.

After this, Thaci’s oft-mentioned phrase that any final deal will be a “painful compromise” sounds senseless – even in the most idealistic world, Serbia would never agree to gift to Kosovo its southern part with no land in return.

Hailing the policy a “legitimate tool,” Thaci praised the 100 per cent tariff imposed on Serbian goods entering Kosovo, introduced by the Kosovo Government last year. It was the president himself who has called for the revocation of the tariff since November 2018.

The summit in Berlin did not succeed in revoking the tariff, and now, it seems Thaci has given it his full support. This is not all.

In keeping with his tendency to trade blows with the Kosovo prime minister, Thaci mentioned during the meeting that the tariff was first introduced by Democratic Party of Kosovo, PDK, politicians Enver Hoxhaj and Kadri Veseli. Thaci, willing to attribute the imposition of the tariff to colleagues from the party he previously led, made sure to discredit Haradinaj’s own role in the process, who consistently ensured that the tariff remained in place.

The tariff issue caused havoc among the ranks of the ruling coalition partners, as Hoxhaj and Veseli later called for Haradinaj to revoke the decision in order to preserve relations with the international partners who demanded the tariff be revoked.

However, one thing was clear after yesterday’s summit: Thaci’s persistence on the idea of changing borders has not ceased.

Before the conference began, Chancellor Merkel said that “A final deal should not be harmful for the regional stability,” hinting that opening the issue of changing borders in the Balkans would be unwise.

While the idea of border changes has found no support from Germany, US foreign policy heads have been more open to the idea since it was first introduced.

“The US policy is that if the two parties can work it out between themselves and reach agreement, we don’t exclude territorial adjustments,” US President Donald Trump’s Security Advisor, John Bolton, said in August 2018.

Asking for involvement that goes beyond the borders of the European Union in order to reach the final deal with Serbia would come with its own risks –  this broader inclusion would open the doors for Russian participation, as Serbia’s main supporter in international scene, the consequences of which remains to be seen.

A new political impotence of the European Union?

One cannot deny that the EU’s Foreign Service did not achieve its primary goal – normalization of relations between Kosovo and Serbia.

Among participants in Monday’s summit was also the EU’s representative for Foreign Affairs and Security Policy, Federica Mogherini. Mogherini’s inability to bring Kosovo and Serbia to the table in Brussels alarmed both Macron and Merkel, resulting, it seems, in the two leaders taking the reins.

The case of Kosovo and Serbia serves as a tool for measuring the EU’s disunity when it comes to foreign affairs policy.

The Lisbon Treaty entered into force more than ten years ago, and supposedly was to create a more united and coherent foreign affairs policy for EU members. A year before the Lisbon Treaty became operational in 2009, Kosovo declared its independence.

But the EU has failed to take a united position for more than a decade now, and their inability to agree on the question of Kosovo’s sovereignty continues, with five EU members still failing to recognize the country.

Despite an eight-year EU-mediated dialogue between Kosovo and Serbia, the normalization of relations has ended in Mogherini failing to get the two leaders in the same room together and the process halted for months.

This May, many of the EU’s institutions will be re-established under new leadership following the elections for European Parliament on May 22 and 24. Nonetheless, yesterday’s summit is sending signals that the role of Brussels in the dialogue between Kosovo and Serbia may begin to diminish, as two of the EU’s founding fathers, Germany and France, slowly take it into their own hands.