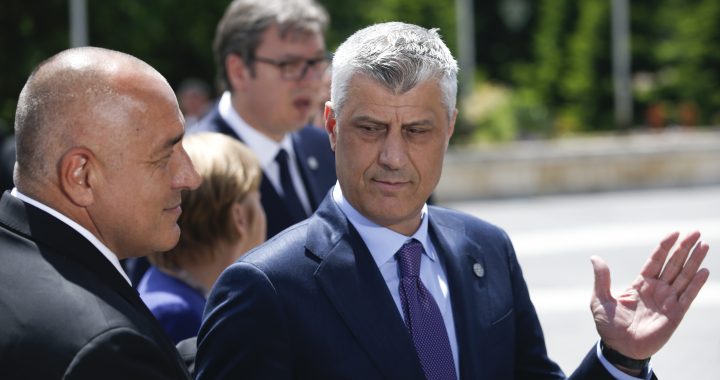 Thaci: No partition, no swaps, no autonomy for North Kosovo

In a press conference held in Prishtina this morning, Kosovo president stressed border correction in southern Serbia, and not ethnic partition, will play a role in final deal between the two nations

Addressing a room full of journalists in an extraordinary press conference, which has recently become the norm, Kosovo President Hashim Thaci discussed once again the possibility of “correcting the border” with Serbia.

Thaci said that a deal might be reached in order for the predominantly Albanian municipalities of southern Serbia – Presevo, Medvegja and Bujanovac – to become part of Kosovo.

“This does not mean partition of Kosovo, a territorial swap, or autonomy for Serbs, but a correction of the border and recognition and membership for Kosovo in all international mechanisms,” said Thaci, reiterating his proposal for a final deal with Serbia.

My proposal for a peaceful solution with Serbia is clear: no partition along ethnic lines, but yes to the border adjustment and mutual recognition.

But critics say that “border corrections” will divide the two countries along ethnic lines and destabilize the region. Thaci has called claims that he was suggesting a partition of Kosovo “fake news.”

Exchange of teritories between #Kosovo & #Serbia (now called "border correction") is not a solution. Its a recipe for long-term disaster. Allowing Vucic-Thaci to redraw maps will condemn the whole Balkans to live the next few decades in conflict. Solution is in EU, not out of it!

Over 30 NGOs from Kosovo and Serbia have called on the European Union to make an explicit statement against partition and exchange of territories.

Thaci’s proposal will most likely be discussed next month when the two presidents of Kosovo and Serbia resume their talks in Brussels.

Calling this phase of the dialogue “difficult” but “necessary,” Thaci said that “we should use every opportunity to reach a historic deal through dialogue.”

Thaci also discussed the establishment of the Association of Serb-majority municipalities – an issue which has raised tensions between Kosovo and Serbia – the draft statute for which was due on August 4.

The managing team, which submitted the draft statute this Monday, is expected to request legal changes for the entity to have powers over various sectors of education, health and economy.