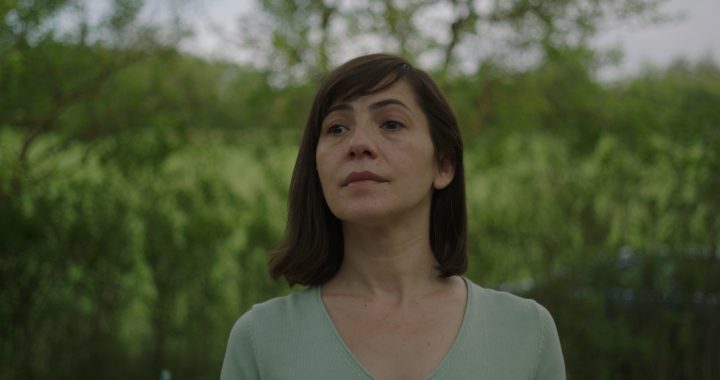 A Month: love, lust, and laughter fill a heartbreaking story

Carting her from house to house every month, a pact between four sisters to share the care of Ana, who is blind, creates its own trials for the sisters and those who depend on them.

Each new month of the year begins in the same way for Ana when she turns on the radio. “I’m Blero and this is 117.5. Like every month, we start our show with one of the most beautiful songs from the immortal Muharrem Qena, ‘a thua…’”

A Month, a short film by writer and director Zgjim Terziqi, gives us a snapshot of Ana’s day-to-day. A 40 year-old blind woman, Ana (Makfire Miftari) has spent her entire life being bounced around the homes of each of her sisters. We meet the characters first at a tense moment: Ana, apparently unable to look after herself, hands over her 120 euros of social assistance money to her sister Gonja (Shengyl Ismajli), who then sends her off to another sister, her treasured radio and her suitcase in tow.

Making his first appearance in the national competition of the Dokufest International and Short Film Festival in Prizren, Terziqi wanted to tell an honest story. But like all the best stories, Terziqi explains, A Month is only half true.

“I like lying, and I like romanticizing,” explains Terziqi. “I’ve never met any of the real people it’s based on. The five sisters are real, the premise is based on a true story, but for the rest, I wanted my imagination to run wild, I didn’t want to meet them.”

A Month will have its Kosovo premiere at the outdoor cinema, Dokukino Plato at 8pm on Wednesday and will show again on Friday, August 10, at Kino N’Lum, the cinema built onto the river in Prizren, at 10pm.

Born out of a small anecdote told to Terziqi by a friend while he was struggling for inspiration, the film spans across three months, drawing the portrait of a family in conflict over their need to care for Ana, a cycle with seemingly no solution. As each character engages with Ana, their personal struggles begin to unravel as well.

From the beginning of the film, the joy that music brings Ana is clear from the peaceful smile lighting up her face as she listens. How the sisters and their family treat Ana’s radio, and her love for music, tells its own story about their relationship.

Ana’s old radio breaks under Gonja’s roof, which her husband helps to fix and then leaves her in peace. During her month with the free-spirited and loving Ajsheja (May-Linda Kosumovic), the radio is completely broken, but in an incredibly moving scene, they sing her favorite song together instead.

Ana is almost completely silent throughout the film, however, leaving room for her body language around the other characters to speak volumes.

One of the most transfixing moments takes place in the well-known bar Tirona, in Prishtina, as Ana is waiting to be sent to live with another sister. “We will find a solution to this. I promise you,” says Ajshe. Ana grips her arm with fear, and the look of terror across her face when she hears the car pull up to take her away is more telling than if she had said even a word.

In this last trip to her absent eldest sister’s home, Valbona, the radio is switched off completely, and she is left alone with Valbona’s husband, Enver (Luan Jaha), in silence.

“I might have written good characters, but it is the cast who really did it,” said Terziqi. “I can’t take credit for that.”

Terziqi, who is 28, embarked on this first short film in October 2016 after graduating from the University of Prishtina studying film directing, together with first-time producer Agon Syla. He explained that the radio represents a thread that runs through his other previous work.

“It’s never intentional, but all my films seem to go in circles, they end where they begin,” he said.

As Terziqi explained, the film ends with an almost identical shot of Ana listening to her music on a brand new radio, an indication that despite the struggle Ana endures, the happiness she quietly searches for may be on the horizon.

A Month will be showing at Dokukino Plato on Wednesday, August 8, at 8pm, and at Kino N’Lum on Friday, August 10, at 10pm.