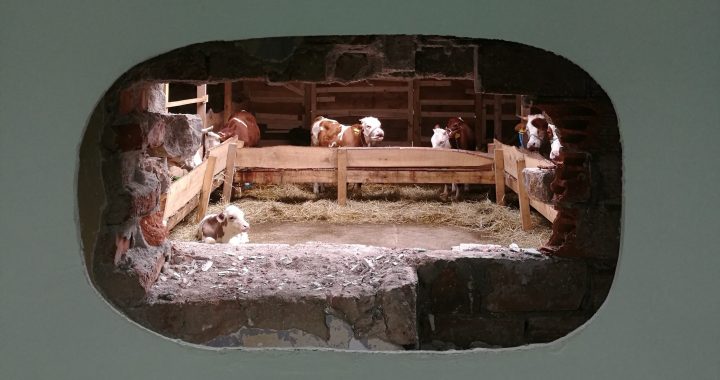 Citizens protest ‘abuse of cows’ for art at Kosovo gallery

Tens of people gathered in front of the National Gallery of Kosovo to protest the use of live cows for an art piece in Sislej Xhafa’s exhibition.

About two dozen people responded to a call by United for Animals, UFA, an animal rights NGO in Kosovo, to protest the keeping of eight live cows in a wooden stall adjacent to the gallery for an exhibition by Kosovo-born artist Sislej Xhafa on Tuesday.

Xhafa’s first solo exhibition in Prishtina, called Love you without knowing, open at the gallery until August 25, utilizes the cows for “Woven Soil,” an intervention piece and part of the exhibition which, according to curator Jerome Sans, conveys the idea of “flying without going anywhere.” The animals can be gazed upon from the gallery’s interior through a medium-sized hole, opened in the gallery wall.

The cows, who are accompanied by their owner and shepherd, sit around the stall and eat hay.

Elza Ramadani from the Foundation for Animal Rights said that the aim of their protest is to prevent future cases of animal exploitation.

“We try to protect and promote animal rights, to allow them to live as much as possible in natural surroundings. This place here, at the university campus, is not a place where they can graze and live how they should,” she said.

Ramadani said that she is disappointed by institutions who consider them “laughable” and do not understand their will to protect animals.

“We are not art critics, we are not interested in Xhafa’s taste… cows have been stuck here for a month and they never go out to enjoy nature. What about the rain, and the noise of the city?” she said. “There is also no sense in letting them out here, this is a city, they need a better space.”

The gallery denies all allegations of abuse and published a Ministry of Agriculture recommendation which confirms that the gallery provides cows with water, fodder, milking, comfort and movement .

In spite of that, animal rights activist Driton Gusia said that they only assess the physical wellness of the animals.

“Maybe Xhafa did not understand that these animals are suffering because, although the Ministry of Agriculture confirmed that the animals are looked after, they can only assess if the animal is physically healthy. To know whether they are suffering, you don’t need professionalism or authority, but only empathy and a little bit of logic,” he said.

Denying that the gallery is violating animal rights, director Arta Agani said that her institution was fully transparent during the organization of the exhibition, and that they uphold every decision made to put it together.

“It is pitiful that a world-class artist is questioned on technical issues, while there is an original, clever exhibition that very uniquely refers to issues of existence, survival, migration and the identity and history of Kosovo,” Agani said during a press conference held prior to the protest.

At the same press conference, the owner of the cows, Arben Avdiu, said that the the animals are farm cows, not free-roaming, and that they enjoy better treatment at the gallery than at his stall in the village.

“I keep them in the stall at home as well, if they were free-roaming they wouldn’t stand it here. Their condition is very good, they have everything they need, they are taken care of all day long, I don’t even look after them during nighttime at home, but here they have 24 hour care,” he said.

Meanwhile, the artist of the work has kept mum regarding the opposition to his art, sending a single quizzical message which director Agani read out loud during the presser.

“I am vegetarian. Love you without knowing,” Xhafa is quoted saying.

Xhafa was born in Peja, Kosovo, and is currently based in New York. He represented Kosovo at the 57th Venice Biennale in 2017 with his exhibition called Lost and Found.