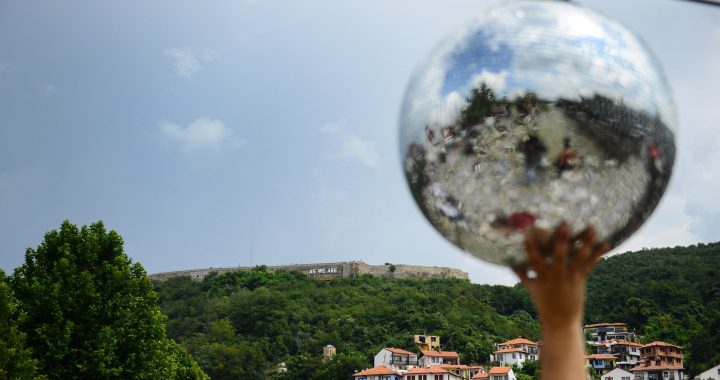 The 2018 Dokufest film festival, transforming the city of Prizren into a cinema complex, an art gallery, a photography exhibition and a dance floor for the next eight days, begins today.

Kosovo’s international short documentary and film festival, Dokufest, celebrates its seventeenth anniversary this year. Held in the city of Prizren, Dokufest will showcase local and international cinema, music and art from Friday, August 3 until next Saturday, August 11.

“Last year’s theme was an exploration on the mysteries and possibilities of the future,” said Nita Deda, the festival’s director.

However, Deda explains, this year Dokufest aims to look inward, rather than forward.

“This edition, the theme is ‘Reflections,’ and it is an invitation,” she said. “We hope that we will be able to create a vast mirror where we reflect on the current state of our world as well as our innermost selves, and we turn Prizren into place where we can grow and celebrate creativity in all its forms.”

This year, boasting an extensive film program, music acts stretching across three stages, photography workshops and exhibitions, outdoor 3D installations and VR experiences, Dokufest is as futuristic as ever. As testament to last year’s slogan, ‘Future is a Girl,’ 87 female directors will have their films showcased at the festival this year.

The films will be screened in ten different cinemas across the city, including the unique riverbed cinema, as well as the cinema atop the hill within Prizren’s fortress. There will also be a virtual reality cinema, showing five films next to the river – the so-called Kej area- including the  animated film “The Little Prince” and a documentary on Yazidi women fighting against ISIS, “The Sun Ladies.”

A 3D installation will be built on the outer surface of a central building in Prizren this year, created by French digital artist Maotik, to coincide this year’s reflective theme. It will run throughout the second half of the festival, a “dynamic generative video mapping exhibition,” that will generate its own content throughout the festival, explained Deda.

Veton Nurkollari, Dokufest’s artistic director, gave Prishtina Insight his take on the cinematic highlights of the festival and what not to miss.

“There are number of international and European films premiering at the festival. We believe that some of the highlights of the festival will be, for example, the documentary “Triumph,” about the Albanian national football team, which is going to have its international premiere.”

“There is also the opening film of the festival, Swedish documentary “The Raft,”” he said. Having its international premiere at Dokufest, The Raft explores the 1970s social experiment by a Mexican anthropologist in which five men and six women were put on a raft and pushed out into the Atlantic for three months, something that ‘did not go according to plan.’

Nurkollari also recommends the Serbian film “Taurunum Boy” by Jelena Maksimovic and Dusan Grubin – a coming of age story chronicling a summer of parties and bike riding. He also recommended Damir Cucic’s Croatian docu-fiction “Summerhouse,” the story of a blind radio docudrama author who invites those who voice his shows to a remote hotel during the quiet season.

There will be more than 19 films involving participants from Kosovo throughout the week: “Fence” by Lendita Zeqiraj, “Zvicra” by Fisnik Maxhuni, “Sarabande” by Kaltrina Krasniqi and “A Month” by Zgjim Terziqi are just a few of the recommendations made by Deda and Nurkollarri.

DokuNights, the festival’s evening musical programme, is collaborating once again with Serbian nightclub Drugstore Beograd, which this year joined forces with Klub 20/44, who will be holding an all-night party on Saturday, August 4, bringing a mixture of house, techno, disco and ambient style music to the Andrra Stage.

“Performances at the castle stage in the fortress include an audio visual performance with Frank Bretschneider, who will bring his work EXP, as well as a very unique performance of Kosovar female rhapsody folk songs, celebrating Kosovo’s intangible cultural heritage,” said Deda.

“An event we are very proud of is the performance with Soundwalk Collective,” she continued, “who will be performing their latest album ‘What we leave behind’ at Lumbardhi, which uses recording samples from Jean-Luc Godard’s personal archive.”

“The festival will be closed with the concert of Albania’s Saz’iso, performing their latest album ‘At least wave your handkerchief at me: The joys and sorrows of a Southern Albanian Song,’” she continued. “They have a mesmerizing style of thrilling harmonies and joyful dances.”

The festival will be wrapped up with the award ceremony at Kino Lumbardhi and a screening of “Westwood: Punk, Icon, Activist”, following the life of seminal British fashion designer Vivienne Westwood, while the winning films will be screened in the other outdoor cinemas across the city at 10 pm.