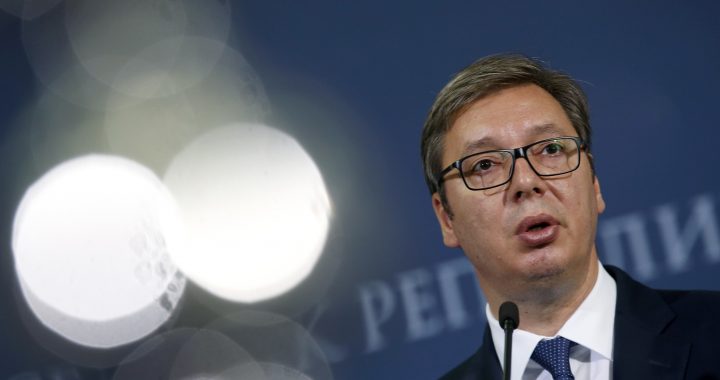 If President Vucic moved to Kosovo

A hypothetical exercise in which President Vucic moves to Kosovo and finally understands the reality Kosovo Serbs face everyday.

Last week, the Bishop of Raska-Prizren Teodisije wrote an open letter to Serbian President Aleksandar Vucic arguing that partition of the territory would lead to the displacement of Serbs from Kosovo. Vucic, who has proposed a territorial swap to reach a final agreement with Kosovo as part of the Brussels-mediated dialogue, fired back at his critics, implying that they have already accepted Kosovo as a reality.

“I am being attacked by those who already have Albanian IDs, Kosovo IDs. Some others would use a different word to say it,” said the President of Serbia Aleksandar Vucic. “Not me. I am only a citizen of Serbia. I have only the Serbian ID and the Serbian passport,” he added.

Just as a reminder, the President of Serbia is the highest official of this country, who receives financial compensation for his work from the budget of the Republic of Serbia. Therefore, I would like to use this opportunity to ask him to renounce the remuneration from the said budget, change his residence, and begin living in the territory of Kosovo.

By doing so, he would certainly have a chance to once again find employment in one of the remaining Serbian institutions in Kosovo (education, healthcare, and public enterprises are last traces of the state of Serbia in Kosovo). My recommendation, however, concerns the full renunciation of his salary from the budget of the Republic of Serbia.

He would certainly not be able to formally change his residence in the actual territory of Kosovo since there are no civil registry departments which function under the laws of Serbia. He would have to go to the nearest department, located in Raska. With a bit of effort, the good will of the clerks, and a bit of luck (since a publicly known person is in question) the President would very easily be able to change his residence to the territory of Kosovo within the Serbian system.

Let’s say  hypothetically, that he still performs the function of the President of Serbia, but while residing  in the territory of Kosovo and under circumstances which the ordinary Kosovo Serbs face (i.e. without a diplomatic passport). Since his job requires plenty of traveling, it is logical that, upon changing his residency, he would rush to get a passport.

He will have to go to Ljeromontova Street in Belgrade in order to procure this document. He will see that the office for people from Kosovo is not located in the same place as for all other citizens of Serbia. He will roam the hallways and run into a door which holds a sign “for persons from Kosovo and Metohija.” The curious President will then ask the clerks what is so different about this office. They will politely present the fact that citizens from Kosovo are not exactly the same as citizens of Serbia, and that the Coordination Directorate is listed as the issuing body – not only Ministry of Internal Affairs.

There will likely be other persons from Kosovo waiting in the queue, so the discussion between the President and the clerks will not last long. Still, he will understand very well the name of the body which issues passports for the geographic area to which he moved. For now, this information will have to suffice. In any case, he is rushing to catch a flight to Berlin from the Nikola Tesla Airport.

Fast forward to the next scene, in which the President is arguing with an airport employee who keeps repeating that the Coordination Directorate is listed as the issuing body of his passport. The President will have to angrily respond that he indeed does know what his passport says, but that he fails to see what the problem is. The employee will reply, “I am sorry, but the passport with such an inscription is not part of the visa-free regime granted to Serbia. You are going to have to miss the flight until you are able to procure a visa.”

At this point, Mr. Vucic will storm out of the airport and cancel the meeting in a phone conversation with Chancellor Angela Merkel. However, righteous as he is, he will proudly smirk at the fact that the officials stick to the regulations, even when the President is involved. Soon he will realize that he has meetings with EU officials throughout the week and that he will have to work fast to obtain a visa. He will shrug his shoulders and slowly depart to return to his new hometown.

The initial passport problems will not discourage him to continue enjoying all the benefits of the holy Serbian land. Now that he is here, he will decide to see how the Brussels Agreement functions in practice, the same agreement which brought many victories over European and Albanian politicians.

He will walk to the MTS d.o.o. office, the company which is in charge of telecommunications in Northern Kosovo and Serb-majority areas. This is one of the grand successes he, along with his negotiation team, had achieved during the negotiations in Brussels. With the intention to share the life of his fellow compatriots, he will throw away his SIM card and sign a contract with this company.

“Can I please have your ID?” the worker on the other side of the counter will say. The President will present his ID, upon which the worker will reply, “I am sorry, but you need to have a Kosovo ID in order to register your number with us.”

“What?” the President yells. “You mean to tell me I need the Albanian, the Kosovo ID?” The president will move towards the exit, but the worker will stop him and say, “Fine, give me your Serbian ID, but you must bring back your Kosovo one within 60 days. Once we are done here, go to the municipal administration building and get the birth certificate you need to get the ID. The procedure is quite simple. Even if the procedure becomes complicated, the deadline is more than enough for you to obtain the Kosovo documents. Just pray that you are not in the category of persons ineligible to receive them. In that case, I don’t know how to help you.” Threading the needle, Vucic will manage to get cell service without having to obtain the ID of the self-declared Kosovo.

But in this hypothetical scenario Vucic might also be running low on cash. Perhaps the time has come for him to look for a job which pays a living wage, since he is now off the budget of the Republic of Serbia. Lucky for him, he’s a workaholic and does not sleep, which allows him to perform the function of the President, on top of whatever job he would find. He will try at the court, which was integrated into the Kosovo system following the Brussels Agreement, but they will ask to see his Kosovo ID. He can try at the police, once-known as the Civil Protection, but here, too, they will ask for his Kosovo ID now. He might even want to start his own business. Alas, again he cannot legally engage in business activities without a Kosovo ID. Many a doors he will have to knock on, all of which he will have to close immediately upon hearing the famous phrase – “Kosovo ID.”

Desperate, he will sit down to rest for a spell and take a look at the news. He will turn on the TV and will see his fellow colleague from the Srpska List, a political party founded after the Brussels Agreement, which now governs Serb-majority municipalities in Kosovo.

“All these people who write these open letters have both Kosovo and Serbian IDs. I would not be surprised if they have IDs of countries which sponsored this Kosovo independence,” the President of Srpska List and Mayor of Mitrovica North, Goran Rakic, said in an interview for the Serbian public broadcaster.

Upon hearing this the President gets a brilliant idea to look for a job precisely in the municipality where the gentleman from the TV serves as Mayor. Regardless of the fact that he is on good terms with the Mayor, he will not want to misuse his position. Instead he decides to knock on the doors of the municipal administration to inquire about potential job openings.

The very next day he will have to pay a visit to the Mitrovica North local administration, another Brussels victory. It would appear luck has finally smiles upon him – there is a job opening posted on the bulletin board. “Kosovo ID” – he will read on the list of documents required. He peers into his wallet and realizes that his finances are about to run dry.

After walking for several hours, sightseeing, enjoying the view from the Church of St Demetrius, a view of both the North and the South, he will decide to go to a local cafe for a  refreshment.

He will hear on television that Kosovo has been granted visa liberalization. He shakes his head, examines his monthly meeting schedule, and realizes that once again he is scheduled to travel across Europe. He calls the first taxi to take him to Southern Kosovo, since he cannot travel with his KM plates across this part of the geographic area. He stands in line at the Agency for Civil Registration to ask what he needs to apply for a passport. Above the door, a simple sign will read – the Republic of Kosovo. He will have to swallow his pride, bow his head, and remain motionless.

“Tjetri!” (Albanian for “Next!”), the voice of the office clerk will boom.