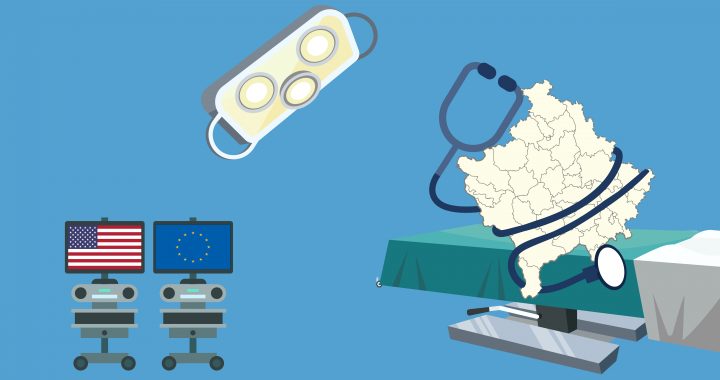 Kosovo is not to blame for its current malaise

If Kosovo’s government is incompetent and corrupt, one might also ask which international backers enabled such people to come to power and – in exchange for their unwavering deference – turned a blind eye to their capture of the state.

On February 15, I attended a reception in London to celebrate the tenth anniversary of Kosovo’s declaration of independence. Lirim Greicevci, Kosovo’s Ambassador to Britain, listed Kosovo’s achievements and spoke warmly of his country’s gratitude to the UK. Karen Pierce, the British ambassador to the UN, promised that Britain would always support Kosovo and work to ensure that it was admitted to both the EU and the UN. The assembled guests toasted Kosovo’s “continued progress.”

Given the grave situation Kosovo had faced 20 years earlier, when Serbian forces rampaged through the then province, there were clearly some grounds for the “progress” narrative. Indeed, many of the guests had played a role in the intervention in 1999, and in the process that led to the declaration of independence in 2008, and their conversations were largely nostalgic. Yet, the contemporary Kosovo discussed in that hall in London – “progressive,” “multi-ethnic,” “emerging” – bore little resemblance to the real Kosovo, 1,500 miles away.

2018 could have been a landmark year for Kosovo. Beyond reaching the ten-year milestone as an independent state, various significant achievements appeared at different points to be within reach.

In January, the “Quint” successfully dissuaded Kosovo MPs from seeking to repeal the law authorizing the Specialist Chambers, promising that the court would aid Kosovo’s international and Euro-Atlantic integration. The relationship between Kosovo and Serbia improved so much at various points that the change was even deemed “historic” by the EU Enlargement Commissioner, Johannes Hahn. The European Commission also declared that Kosovo had made “great progress” and now met the remaining criteria for visa liberalization.

In November, Foreign Minister Behgjet Pacolli spoke confidently about the country’s bid to join the global policing body Interpol as a key moment in Kosovo’s progress towards full international recognition, predicting that “after the declaration of independence, this is the most important moment so far”.  In December Kosovo’s parliament sanctioned the creation of its own army which would, President Thaci assured, contribute to  “peace in Kosovo, the region and wherever in the world when asked.”

As 2019 approaches, meanwhile, all of these earlier potential achievements have either slipped away, failed to materialize, or proved detrimental to Kosovo’s progress.

President Hashim Thaci and Prime Minister Ramush Haradinaj have clashed publicly over Kosovo’s future trajectory, and specifically over Thaci’s proposal to “correct” the border with Serbia as part of a final settlement.  Mass demonstrations have been held to protest against the proposed “land swap”. The EU-led dialogue with Belgrade has broken down, with Haradinaj accusing the EU foreign policy chief, Federica Mogherini, of having “strangled and disarranged the process”. The EU has criticized Kosovo for imposing tariffs against Serbian goods, which followed Kosovo’s failed bid to join Interpol. A number of states have de-recognized Kosovo.

NATO has also criticized Kosovo for establishing a de facto army without consultation, leaving the country’s relationship with the alliance uncertain. Kosovo failed to become a new member of Interpol. The Specialist Court’s “invitation” to certain individuals to attend interviews have been openly rejected; the promise of visa-free travel in 2018 has been dashed with Haradinaj claiming Kosovo had been “betrayed”. EU membership remains a very unlikely prospect.

There is also a growing perception that Kosovo’s current malaise is partly its own fault. NATO’s expressed disappointment at the creation of the army and the EU’s condemnation of the trade tariffs have placed Kosovo in the unusual position of regional “spoiler”. This has led some commentators to accuse Kosovo of behaving in an irresponsibly aggressive fashion and of “biting the hand that has been feeding it”. Serbia’s President, Aleksandar Vucic, has unsurprisingly capitalized on this new disposition, appealing to the UN Security Council “to tame” the unruly Kosovars. It is illustrative of Kosovo’s current malaise, that one of Milosevic’s factotums – who has yet to acknowledge the scale of the crimes committed by Serbia in Kosovo – can now use such obviously colonial language.

In reality, the problems that have assailed Kosovo in 2018 are not exclusively of its own making. The government may well be corrupt, incompetent, and staffed by many senior figures with links to criminality and violence but one might ask, “who enabled such people to come to power after NATO’s intervention and who supported them ever since?”

The current political elite could not have maintained their stranglehold over Kosovo without the support of various powerful international backers who chose to turn a blind eye to their “state capture” in return for their unwavering deference, and a series of concessions that have led Kosovo to gradually become something of a vassal.

The extent to which Kosovo has been treated as a kind of a pliant minion has steadily degraded its capacity to function as an independent state both internally and internationally.

While the EU has supported Serbia’s efforts to rehabilitate itself – without it meaningfully atoning for its many past crimes – Kosovo has been ordered to undertake a series of concessions that have undermined and paralyzed the domestic political system, and made a mockery of Kosovo’s status as an independent state. They include the Serbian municipalities agreement, the border deal with Montenegro, the creation of the “Specialist Chambers”, and the micro-management of Kosovo’s constitution and national symbols. Collectively, they constitute an unprecedented degree of external interference in the affairs of an ostensibly sovereign state, which naturally impinge on the capacity of that state to function domestically and achieve international recognition.

Worse still, despite these humiliating concessions, Kosovo remains largely unrewarded; the people of Belarus and Kosovo are the only European citizens west of Russia who do not enjoy visa-free travel; Kosovo is not a member of the EU, NATO, the UN, Interpol, UNESCO and many other key international organizations. This isolation, of course, contributes to Kosovo’s high unemployment rates, which is further exacerbated by the cronyism and nepotism of the externally-backed elite.

The events of 2018 thus illustrate the extent to which Kosovo has been forced into a curious predicament, especially with respect to the two most important issues it faces; its international status and its relationship with Serbia.

Though largely shorn of true independence by virtue of the relationship between the political elite and powerful external actors who have continually wrung concessions from their local sponsees, Kosovo has sought to try and convince the international community that it is actually independent. Hence the largely ill-fated efforts to win more recognitions and join international organizations. At the same time, Kosovo has been encouraged to “make peace” with Serbia – though without Belgrade acknowledging past wrongs – so as to paradoxically enable Serbia to join the EU.

It is, surely, no surprise that both efforts have derailed spectacularly, creating the perfect storm that now engulfs Kosovo, and looks set to rage on.

Aidan Hehir is a Reader (Associate Professor) in International Relations at the University of Westminster (UK). He teaches at the RIT Kosovo Summer School, and his research interests include statebuilding and the laws governing the use of force.