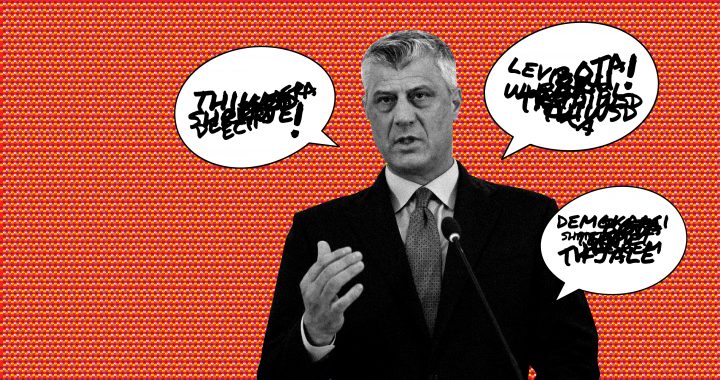 What language does Hashim Thaci speak?

Scrutinizing Thaci's contradictory language in his Financial Times piece, published yesterday, only continues to cast vagueness over his political position for the people of Kosovo and beyond.

It has become difficult to deconstruct the political vocabulary and pinpoint what the President of Kosovo Hashim Thaci represents through his ideas and statements.

In an op-ed published yesterday in the Financial Times, Thaci was consistent only with what he has repeatedly said throughout the last decade as former prime minister and current president. “For Kosovo, there is no alternative to EU and NATO membership. We do not have a Plan B, nor are we seeking one.”

Nonetheless, following this firm and stable position—widely embraced by the whole political spectrum in Kosovo— abruptly, Thaci gave a warning. “The opportunity for Kosovo and Serbia to reach agreement risks diminishing. The potential for others to take advantage of the vacuum is great.”

If Kosovo has no alternative other than EU and NATO membership and has no Plan B, a legitimate question follows: what makes this vacuum so great for Kosovo?

Although Thaci does not explicitly say when he writes “the others”, he means Russia, as he has scaremongered about the Russian interference in the region before.

According to such logic, Kosovo should speed up to reach an agreement, not because it is vital for Kosovo’s interest, but to adjust its geopolitical circumstances. Certainly, such language an adjustment in line  with the anguished westerners for the increased Russian interference in the Balkans.

The central oxymoron in Thaci’s op-ed and his latest discourse goes something like this:

“Kosovo will maintain its current political system as a unitary republic…. We will not explore experiments that would throw the constitutional order into disarray.”

Now, Thaci, who authored the idea of “exploring experiments” weeks ago, has either forgotten his own idea of “correcting borders,” or is simply using language so vague that he contradicts himself. Other scenarios may be that the president received clear messages in New York at the UN General Assembly that land swaps are out of the question in the Balkans. On the other hand, perhaps Thaci is communicating with two audiences, the internationals and those who he claims are representing the people of Kosovo.

In any case, it is precisely his idea of border correction that jeopardizes the constitutional order of Kosovo, and in a matter of days, Thaci is denouncing the author of such idea—himself.

Other self-antagonism in Thaci’s discourse goes similarly. “First and foremost, a border correction should not be based on the principle of ethnic separation. We do not want to split up our two peoples,” reads Thaci’s argument.

It was precisely Thaci who proposed the odd idea of border correction based on principle of ethnic separation. The Presevo valley is predominantly inhabited with Albanians in the south of Serbia and Thaci’s only clear demand out of the entire blurry scenario —camouflaged under the term “border correction”— was that the Presevo valley joins Kosovo.

How otherwise can you fool the others, and not introduce such an idea based on separation along ethnic lines?

Again and again in his closing note, he continues to serve contradictions by hinting that he remains committed to the idea of border correction, confirming that it remains an aim.

“Secondly, we are not seeking to create the conditions for border changes elsewhere in the region, such as with Albania, despite what some said,” he continued.

For more than a decade, Thaci and his subordinates have applied the discourse that a multiethnic state is the only solution in Kosovo before haphazardly making a u-turn to promote correction of borders, completely based along ethnic lines.

Those who witnessed Thaci’s political maneuvers throughout his career are aware that in order for Presevo valley to join Kosovo, a high price needs to be paid.

Thaci often said that the final deal will be a “painful compromise.” However, he was reluctant to name his price, the north of Mitrovica, and it would be no surprise to soon see other tactical moves once he gives up the idea. There are other examples of him doing so, and to name those freshest, one can look to his effort to abolish the Specialist Chambers in December 2017, even though he was one of the fiercest proponents of establishing the Court.