A government that gives away millions

The Kosovo government is planning to strike a deal with Limak, a private joint-stock company, to the tune of 84 million euros in a non-transparent that favors a private company and  damages public interest.

Last week, the contract for the extension of the runway of the International Airport in Prishtina was obtained and subsequently published along with an analysis of the contract. The findings of the analysis report are quite concerning, leaving many unanswered questions. If everything goes according to the plan, the government will give away 84 million euros to Limak Kosovo International Airport JSC,—who concluded their contract for airport concessions for Prishtina’s airport in 2010 ―over the next five years.

Through this concession agreement, the Kosovo government gave all rights of investment in the airport in Prishtina to the private joint-stock company, who in turn retain all profits from investments made, paying rent back to the government for the next 20 years.

On August 4, 2017, the former government led by Isa Mustafa signed a contract worth 33.6 million euros through the Ministry of Infrastructure with the concession partner of the airport, Limak, about one month before finishing its mandate. The contract planned to extend the runway of the airport by 500 meters, as well as buy equipment that is needed for the landing and radiocommunication systems.

The issues lie with the fact that this contract of such high value was signed not by announcing a tender, but through a negotiated bid only. Thus, everything that is to do with this contract was kept away from the public eye and the media. From the ministry’s initiative to extend the runway to the signing of the contract, the public was completely kept in the dark. The only exceptions are a few sporadic cases when ministers have mentioned the project superficially.

Prompted by this total lack of transparency, I took it upon myself to find this contract and analyze its content. Not only did I find the contract, but I also discovered the reason why it was being kept secret – although the contract does not have a clause classifying it as a business secret, the Ministry of Infrastructure did not publish it.

I had to procure the contract unofficially, and from what I saw, I understood why its publication never happened.

The Ministry of Infrastructure had signed a contract that obligated it to invest in a private business, namely Limak, and the ministry did not even have control over who carried out the work. In other words, the ministry and Limak agreed that Limak would invest around 34 million euros to increase its business capacities, while the ministry would receive the invoice.

The ministry had initially attempted to make this investment under the original concessionary contract, the one concluded in 2010. However, there were problems because the Law for Public Procurement only allows for additional work to amount to a maximum of 10 per cent of the value of the original contract, and the 34 million figure clearly crossed this boundary.

Yet, since the ministry was unwavering in its claim to invest in Limak, legal obstacles were not important because, as Mayor of Drenas Ramiz Lladrovci once said: “law is like a rubber band.” That is why they decided to go with another alternative – illegally representing the project as one of public works.

This was all done without financial analysis, and based only on a clause of the concessionary contract of 2010 that says that Limak has exclusive rights to decide what work they carry out at the airport.

Nevertheless, in this case, this right is nothing more than any ordinary right an owner enjoys over their business. Whatever business it may be, the owner decides what is invested and who carries out the work. The same goes for the airport.

Thus, the only conclusion that one can derive from analyzing the contract is that in fact, the Ministry of Infrastructure was subsidizing a private company, that of Limak, but without respecting the necessary procedures for subsidy.

At present, any damages incurred to the budget through this contract can be invoiced to the former government.

Now, instead of halting the implementation of a contract that goes against the law, the current government has decided to amplify the abuse of public money.

If we listen closely to an interview of the Kosovo Minister of Infrastructure Pal Lekaj on September 17, it is clear that the government is aiming not to pay Limak the cost of the contract from the budget, but instead make a compensation agreement so that Limak would pay the costs of the investment, while the government, through compensation, relinquishes any income the government would receive from the concessionary tax for the next five years. This tax is the money that Limak pays the government to run the airport.

Translated to numbers, the income from this tax for the next five years (2019-2023) will be around 84 million euros, assuming that the trend of increase in number of travelers continues when visa liberalization occurs. This means that, through this contract, the government is planning to give away 84 million euros to Limak. In other words, a project that according to the ministry started with the aim of increasing income is not only failing to do that, but is paradoxically causing losses worth many times more than the cost of the project itself. 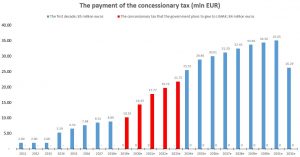 The Annual Financial Report of the Government.

If the cost were not this high for the country, it would actually be very comical. It is the second such case happening this year, after Bechtel & Enka’s 53 million euros, in which the former government signed an agreement that damaged the budget, and the one in question is increasing this damage by tens of millions instead of stopping it. Furthermore, the same ministry is responsible for both cases.

The difference now is that the damage can be stopped. All that needs to be done is for this contract to be declared invalid because it goes against laws in power, as well as stop any change in the dynamics of the payment of the concessionary tax. If Limak sees it as necessary to extend the runway, they can do it with their own money, as is stipulated in the concessionary contract, and not with taxpayers’ money.

This article was supported as part of a project financed by the European Union Office in Kosovo and applied by the Balkan Investigative Reporting Network, BIRN, and the Association of Kosovo Journalists, AGK. The author is exclusively responsible for the content of the article and it cannot, in any way, be considered a statement by the EU, BIRN, or AGK.

What language does Hashim Thaci speak?

A week of reshuffling at the Kosovo government